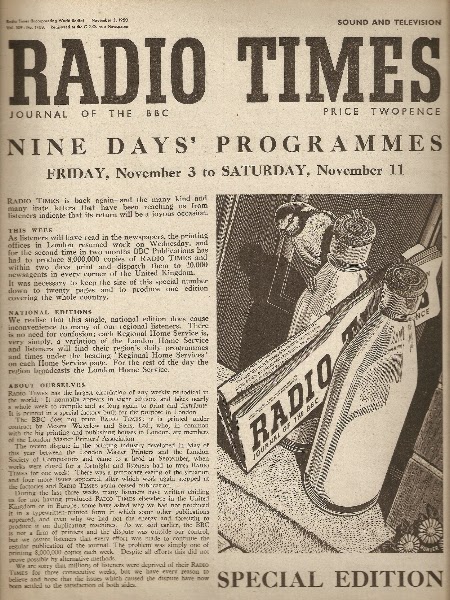 Christmas has arrived early! On Thursday the BBC’s GenomeProject released nearly ninety year’s worth of Radio Times listings. I predict many a lost hour, make that day, blowing the virtual dust off long-forgotten programme schedules.


Sadly, due to copyright problems, there are no scans of the actual magazines; so my collection at least retains some value. I can still drop in the odd article, piece of artwork or advert to blog posts (see above). And to be honest there’s something satisfying about seeing the different typefaces and layouts of the listings over the years. But the ability to search and order the programme details on this online Beta version is an absolute boon to researchers and the idly curious alike.

The OCR software does throw up some odd spellings – this is one of many I’ve found in the first day. Readers are invited to submit edits – I’ve done a 100 or so already. Apparently there are some verification processes in place to ensure that the edits are indeed just corrections rather than an attempt to improve the entry, adding episode titles or missing cast members were none existed at the time of going to print for example.


So what random fact can I find this morning? Well Brian Matthew, currently on air as I publish this post started with the BBC in 1954. But in 1953 he presented a series of programmes on Music from Holland, presumably as at the time he was still working for Radio Netherlands.
Andy Walmsley at 11:00
Share