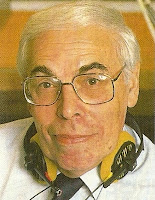 And on Sunday afternoons from 1980 Sounds Easy:
 


Alan Dell’s broadcasting career started in the 1940s when he worked for the South African Broadcasting Corporation as an announcer and then producer and presenter. “I hadn’t been there five minutes” he said, “when I saw some 78s of Count Basie. I asked if they had ever done a programme with them and they said ‘Jazz, we don’t do jazz’ ! So, I wrote a programme and asked the Programme Manager if I could broadcast it and he said ‘Yes’.

In 1952 Alan left for the States to study acoustics at Capital Records. On his way back to South Africa he came to Britain and decided to stay. Joining the BBC he was soon working with the Ted Heath Band and introducing Late Night Swing Session. He was an early presenter of Pick of the Pops in 1956 and 1957 and also hosted other Light Programme shows such as Jazz Club, Roundabout, Morning Call, LP Parade, Music Through Midnight, Session at 6 and Date with a Disc.

On Radio 2 Alan’s relaxed style was also suited to late night broadcasting and he was a regular on Music to Midnight, Music Through Midnight and The Late Show. He would also present concerts when the likes of his friend Billy May was in the UK.
 

Alan worked on a number of recording sessions and compiled LPs, most notably those for Frank Sinatra. I have in my collection The Rare Sinatra album released in August 1978 with sleeve notes by Alan that includes some tracks getting their first world release. Alan continued to champion Frank and played one of his records in every edition of Sounds Easy.


Although I used to record loads of big band music from Alan’s shows regrettably I kept very little in the way of complete programmes. From 30 December 1991 he’s part of Dance Band Days. The announcer is Tim Gudgin.


Alan continued to host his Monday night shows until he became ill in late 1994. Malcolm Laycock, who would eventually take over Alan’s shows permanently, Campbell Burnap and Bob Holness all deputised until he was well enough to return in early 1995. Alan died in August of that year.
Here’s an edition of Big Band Sound featuring Alan’s favourite Ted Heath. This was broadcast 19 November 1984. The announcer after the programme is Steve Madden.


This edition of Sounds Easy from 23 March 1980 was the last in the series, well not quite! The end of the series seemed to come as a surprise to Alan and he announces this as “the last Sounds Easy until…who’s know when”. The following week Benny Green took over the slot. However, after protests from listeners, Sounds Easy did return to the airwaves that winter. Both Alan’s and Benny’s shows became Sunday afternoon regulars until late 1994 when David Jacobs took over from Alan when he became unwell.

On this recording you’ll also hear newsreader Paddy O’ Byrne and announcer Chris Aldred as well an a chance to hear rather more than usual of the theme tune That’s All by, I think, Andre Previn & his Orchestra.

Andy, the link for Sounds Easy on 23 March 1980 is dead. Any chance of reuploading it please?

Thanks in advance,
John

John - thanks for alerting me to this, not sure how it happened. File now available. That reminds me that I think I have another Sounds Easy tucked away that I need to digitise and upload.

Thanks Andy! Looking forward to that other one too. Do you happen to have any of the Hubert Gregg or Charlie Chester shows by any chance?

Yes for Hubert but only clips for Charlie Chester. I'm planning to post about both broadcasters next year.

Great - will look forward to that.

Andy, I have a complete recording of the 100th edition of Alan Dell's Big Band Sound. It's not HiFI quality as I recorded it in my youth direct onto a cassette tape ...but it's very listenable and contains a selection of tracks based on numbers of pervious plays (a chart). I have digitised it for my i Player but more than happy to send you an mp3 copy on CD if you are interested. Best wishes, Glenn Harvey

Andy - do you have a date for the Sounds easy which opens up with Sinatra's Witchcraft?

Cheers Andy. Nice to see some of Alan's Sounds Easy shows are beginning to see the light.

If only we could see the same with Benny Green's programme. And oh how much we miss the Radio 2 of old.

I remember talking to Alan Dell at Pizza on the Park around 1994; he was obviously unwell but still full of charm with a twinkle in his eye and he was a gracious host at a table surrounded by a group of fans and some good looking young women!

BTW: I have some complete Benny Green Sunday shows on tape, that I can try digitise to upload.
Nothing like this on UK radio today; I was listening to Jonathan Schwartz on the internet but age has caught up with him now so he has stopped. Some great show archive music though at

with interviews similar to Benny's shows.