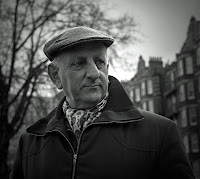 If ever there was a broadcaster who you knew was simply having fun on air it was Brian Johnston. With a broadcasting innings in which he clocked up nearly a half century I recall the radio highlights of Brian’s career.

Brian’s start in broadcasting owes much to that old adage “it’s not what you know but who you know”. Kicking his heels after the war and hoping to do something in the entertainment world rather than join the family coffee business, he was invited to dinner by an old guards officer friend where he met former BBC war correspondents Wynford Vaughan-Thomas and Stewart MacPherson whom he’d previously met in 1943 during manoeuvres in Norfolk. Mentioning his ambitions he got a call the following day from ‘Stew’ asking him to report for an interview with the Head of Outside Broadcasts.

Writing in the Radio Times in 1955 Vaughan-Thomas recalled how MacPherson got Brian the job:
Brian was given a couple of tests one of which was to go down to Oxford Street and record some vox pops under the guidance of Wynford, who takes up the story:


He met Brian during the war when ‘Stew’ was a War Correspondent and ‘B.J.’ was Technical Adjutant in a Grenadier Guards Battalion of the Guards Armoured Division.  ‘Stew’ remembered this unusual Guards Officer when the war ended. He mentioned him to S.J. de Lobiniere then the Head of Outside Broadcasts. “What are his qualifications?” asked ‘Lobby’. ‘Stew’ summed them up in one sentence, “He’s game for anything!”

Brain passed with flying colours and joined the BBC on 13 January 1946.


I was the man who was given the job of testing Brian Johnston as a broadcaster in a street interview. On a cold winter’s night I took him out into a crowded Oxford Street and flung him for the first time against the astonished passers-by. The result was rather like an atomic explosion-slow to start but ending in the crowd mushrooming to gigantic proportions. In the centre of the disturbance stood a tall and voluble figure. He wasn’t just interviewing-he was talking a three-volume novel to his victim. It was a gloriously uninhibited conversation which would have gone on for ever if I had not cut it suddenly short with my stop-watch. An admiring onlooker murmured to me “that fellow’s got the gift of the gab, hasn’t he? – has he been long at the BBC?” I murmured back, dazed by Brian’s performance, “He joined us five minutes ago!” 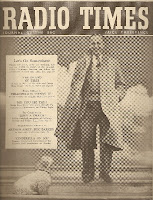 In those days the OB team would send out reporters to cover whatever events they could just for the excitement and novelty of live broadcasting. Brian’s first job was to report on the blowing up of an unexploded bomb discovered in the lake at James’ Park. Taking up position to commentate Brian was moved on by the police and ended up standing on a loo in the ladies peering through a small window as he described the explosion and the aftermath.

Some of Brian’s early broadcasts saw him working as assistant to John Ellison with live relays from theatres and music halls in Round the Halls which might feature a singer, a comedian and then a speciality act that would make good radio like an impressionist, instrumentalist or animal impersonator.  Another early show was Work’s Wonders, a variety show akin to Worker’s Playtime but featuring the amateur talents of workers from the factory.

It is, of course, for cricket commentary that Johnners is best known. His involvement started in his first year with the BBC when an old cricketing chum Ian Orr-Ewing, then the Outside Broadcasts Manager for the TV service (he organised the coverage for the 1948 London Olympics), asked him to join the newly formed commentary team alongside Aidan Crawley, Percy Fender, Walter Franklin and R.C. Robertson-Glasgow, beginning a 24-year span covering the sport on the box.

Thus began an extremely varied period in Brian’s career alternating between radio and TV, outside broadcasts and entertainment shows. In the 50s and 60s he was the man on the spot for the Royal Variety Performance, Trooping the Colour, Brass Band Championships, the Funeral of King George VI, the Boxing Day Circus, Sunday Night at the London Palladium and the Monte Carlo Rally (hurtling round France with Richard Dimbleby in his touring Allard). On TV he provided the cricket commentary for Television Newsreel, presented Sportsview, was the stooge for Terry-Thomas in How Do You View?, commentated on the Boat Race (he’d later join the radio team) and sat alongside Bernard Braden at Grosvenor Gate to cover the Queen’s Coronation.

In 1953 Johnners joined the panel, in place of the absent Kenneth Horne, of the perennial favourite Twenty Questions and also chaired What’s It All About? that featured a panel of Horne, Celia Johnson and Dilys Powell.  Let’s Go Somewhere returned to the airwaves as a stand-alone show in 1955 but this time they would also play tricks on the public with Brian often having to wear some form of disguise (amazingly this seemed to work on the radio!).

Quizzes and panel games proved an interesting, though not necessarily lucrative, sideline for Brian as he was often asked to stand-in at the last moment because there was “an added incentive for the BBC to use me. Against my name in the final accounts for the programme were the letters ‘SNF’ in brackets. They stood for ‘staff no fee’, so that in place of the fee that some of the others got I cost the BBC nothing!” Those quizzes included Spot the Headliner, Sporting Chance (an early version of A Question of Sport that then transferred to TV) and Treble Chance, a touring general knowledge quiz that featured Nan Winton, Charles Gardner and his broadcasting mentor Wynford Vaughan-Thomas.

Contributing OBs into the Saturday afternoon Out and About programme Brian recalls “the tandem I rode with the announcer Patricia Hughes on a trip to Le Touquet, but we found it very difficult. It’s essential for both partners to do the same thing at the same time, especially starting and stopping, and we seldom did!”  This conjures up a lovely image for anyone who remembers the plumy-voiced Patricia in her Radio 3 announcing days.

Brian was also an adept interviewer and talked to the famous in Meet a Sportsman (1959-62) and those related to the famous in Married to Fame (1962). He was also contributing a feature called Many Happy Returns to the Today programme and would eventually become one of the regular stand-ins for Jack de Manio between 1963 and 1967.

In the early 60s Brian was still popping up on a variety of TV shows: taking over from Huw Wheldon on All Your Own, working alongside Peter West, Polly Elwes and David Dimbleby on the forerunner to Tomorrow’s World, What’s New and providing commentary for Princess Margaret’s Wedding, Miss World and the International Ballroom Championships. But his non-sporting work lessened a little as Brian became the BBC’s first cricket correspondent in 1963 and would accompany England on their world tours.

During the 1960s whilst providing the BBC’s television cricket commentary Brian was also appearing with his radio colleagues on Test Match Special as well as being the occasional anchor of the Saturday afternoon Sports Session. But in 1970, and in typical BBC fashion, i.e. dropped with no explanation or thanks, Brian was no longer considered right for the TV – too jokey one suspects – and so became a permanent member of the TMS team, staying with the programme for a further 24 years until his death in 1994.


In this era Test Match Special would become something of a national institution a “comedy and cricket revue…fuelled by appalling puns, chocolate cake and an abiding love for the world’s greatest game.” (You Magazine 14.7.85)  On the retirement of John Arlott in 1980 Brian became the senior commentator alongside ARL (Tony Lewis), The Alderman (Don Mosey), Old Bloers (Henry Blofeld), The Bearded Wonder (Bill Frindall), Truers (Fred Trueman), The Boil (Trevor Bailey), Jenkers (Chris Martin-Jenkins) and later Aggers (Jonathan Agnew) under the control of producer Peter Baxter. It was Johnners and Aggers who would, in 1991, provide one of radio’s most famous fits of on-air giggling – the “leg-over” incident.

Fate intervened in March 1972 when Franklin Engelmann, presenter of the long-running show Down Your Way, died suddenly and Brian was drafted in at extremely short notice, there being no back-up programmes being ‘in the can’.  Like his predecessor, affectionately known as Jingle, Brian would also clock up 733 shows between 1972 and 1992.

The premise of Down Your Way was simple, the programme toured by highways and byways of the UK interviewing lots of “jolly nice” interesting and colourful characters who would then choose their favourite piece of music. It did eventually run out of steam in 1987, sounding a little dated. Plus there are only so many times you can hear people request Handel’s Hallelujah Chorus or the sig tune from The Onedin Line. This is one of the final editions from April 1987 with a visit to the city of Durham.

Aside from the cricket commentary and travels with Down Your Way, Brain (having officially retired from the BBC in late ’72) remained a regular on panel games and quizzes, popping up on Just a Minute, Quote…Unquote, On the Air, The Year in Question, Funny Peculiar and The Law Game before taking up the role of ‘umpire’ in Radio 4’s Trivia Test Match (1986-93), general knowledge played to the rules of cricket.


A year later Brian was undertaking the opportunity to entertain an audience with his anecdotes and reminiscences in his An Hour of Johnners theatre tour when he was taken ill in the December, he dies just a month later. He’d had, as he might have said, “a jolly good innings”.

Hear more about Brian's early career tomorrow on BBC Radio 4 in Staff No Fee:The Other Life of Brian and this weekend on BBC Radio4 Extra Brian Johnston-A Innings with Johnners

What a wonderfully reserached post Andy. I enjoyed the reading and now I am off to enjoy the links!