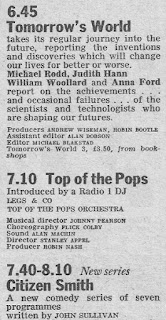 The juxtaposition of punk and disco makes fascinating viewing for those of us watching the 1977 Top of the Pops repeats (Thursday nights BBC Four).  It remains uncertain whether 1978 re-broadcasts will go ahead, sans Savile-fronted editions, next year. Here’s hoping they do.

Anyhow, before we leave 1977 here’s a chance to hear Alan Freeman counting down the hits from July of that year in a Pick of the Pops show on Radio 1 in 1991. Music from Barbra Streisand, Carole Bayer Sager, The Stranglers, Kenny Rogers, ONJ, Boney M, Gladys Knight & the Pips, ELP, The Jacksons and Hot Chocolate.


Right is the Radio Times billing for the edition shown last week. The unnamed “Radio 1 DJ” turned out to be Peter Powell’s first show.
Posted by Andy Walmsley at 13:00