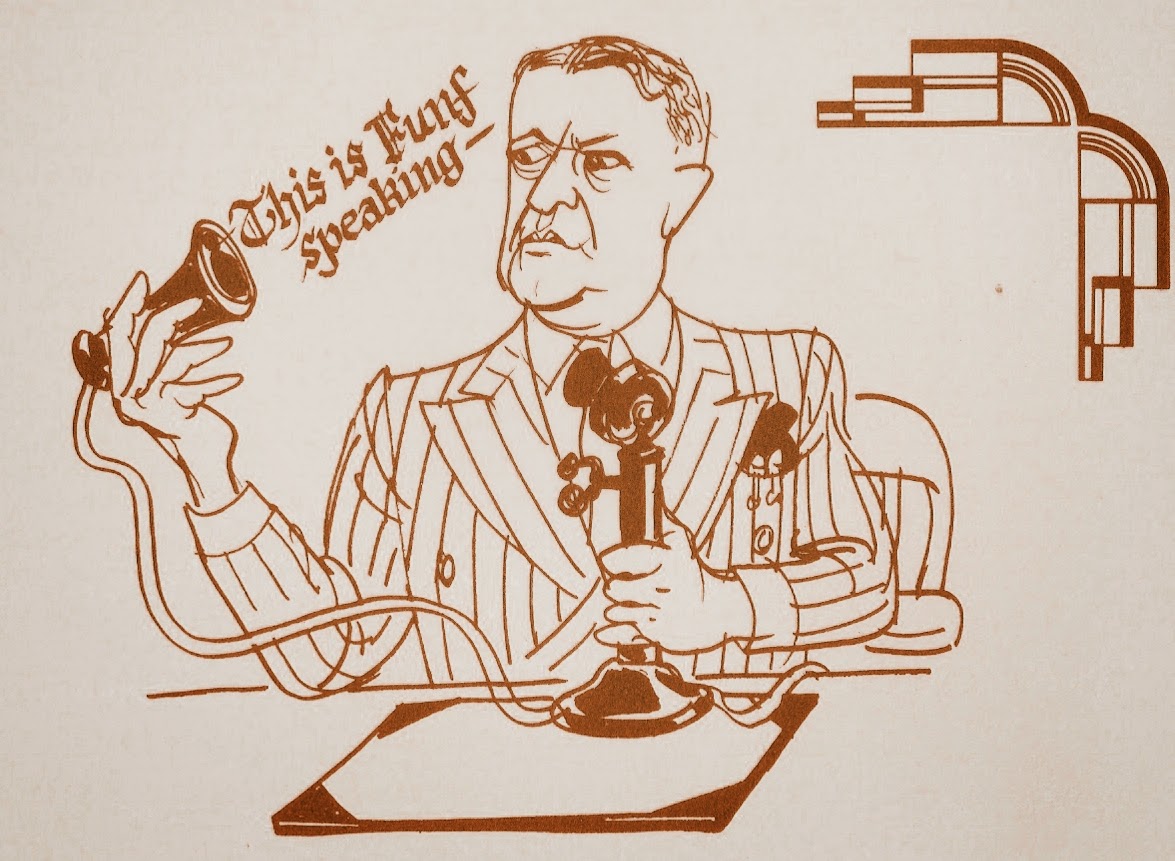 During World War II he was probably only second in popularity to Winston Churchill. He was a comedian who poked fun at the establishment and kept the nation laughing. His show was filled with more catchphrases than The Fast Show decades later. His death was mourned by millions, and thousands lined the streets for his funeral. He’s now largely forgotten. That man was Tommy Handley.


Listening back to old episodes of It’s That Man Again (1939-49) – though few of the 300+ were kept – the clever word play from scriptwriter Ted Kavanagh is much in evidence, as is Handley’s rapid gunfire delivery. But with the passage of time some of the puns and broadly drawn characters that constantly drop in and out of the action make it hard to understand why the audience were whooping with delight. Today’s PC brigade would have apoplexy about Ali-Oop and Signor So-So.


One of the best remembered characters was Mrs Mopp, her cry of “Can I do you now, sir?” was one of the many ITMA catchphrases to enter the common vernacular. This scene dates from a 1942 show, make of it what you will:


F/X Door Opens
Tommy Handley: Well if it isn’t Mrs Mopp, the char with the bald-headed broom
Mrs Mopp (Dorothy Summers): Can I do you now, sir?
TH: Yes, Mrs Mopp, I want you to pacify my landlady, Cheap Chat.
MM: Her sir? I wouldn’t lower me dignity by talking to her. She’s a woman, that’s what she – a woman!
TH: You confirm my worst suspicions.
MM: What I could tell you about her and her daughter!
TH: Some other time, Mrs Mopp. What about her daughter? Anyway, she threatens me with expulsion.
MM: How dare she! You’ve never had it, have you sir?
TH: No – I’ve had brewer’s asthma and a touch of the tantivies, but never expulsion.
MM: I could let you have a nice combined room, sir. It may not be clean, but it’s comfortable. My present lodger’s been pinched again.
TH: What – between the mattress and the ironwork? I’ll think it over. I should be very happy in Maison Mopp.
MM: I’ll get rid of the pigeons before you move in. Ta-ta for now.
TH: Hotpot for stew.
FX: Door closes


I mention all this because BBC Radio 4 Extra are today repeating – for the first time – the earliest surviving recording of ITMA. However, it’s not one of the regular editions but is a recording of the stage show performed at the Palace Theatre, Manchester and first heard on the Home Service on 18 May 1940. The stage tour, produced by the bandleader and impresario Jack Hylton, went on the road shortly after the second series had ended but was not deemed a great success.


Returning in 1941 the programme hit its stride: “a basic, if slim, storyline, sustained by an endless procession of crazy characters through the overworked door – often for no particular reason – each of whom introduced himself with the requisite catchphrase. Although he was the central figure, there was no strict division of comic and feed between Handley and this cavalcade; roles were interchangeable and laughs evenly distributed.”


Tommy Handley himself had been a radio star from the earliest days of broadcasting. Born in 1892 he’d seen service in the First World War and became involved in concert parties. After the war he briefly formed a double-act with Jack Hylton. From 1921 he toured the music halls with The Disorderly Room, a sketch written by Eric Blore – Blore himself now best-remembered for his comic roles in the RKO films Top Hat and Shall We Dance. Handley performed the sketch in his first broadcast in 1924, a relay of that year’s Royal Variety Performance.


From 1925, having passed a BBC audition, Handley was regularly heard on the wireless in shows such as Radio Radiance (his first regular broadcast was 22 July 1925), Handley’s Manoeuvres, Tommy’s Tours and Hot Pot. In 1930 he formed the double act North and South with Ronald Frankau; they would later become Murgatroyd and Winterbottom, specialising in pun-laden topical commentaries on current events. In 1936 he appeared on Radio Luxembourg in Tommy Handley’s Watt Nots.


By the late 30s the BBC’s head of variety was looking for another “fixed points” comedy series to follow the hugely successful Band Waggon, and for Tommy Handley to be the star. The team of Handley, Kavanagh and producer Francis Worsley came together - meeting over at the Langham Hotel in Portland Place - to create It’s That Man Again.


Still popular in its post-war incarnation ITMA featured in the 1947 edition of The World Radio and Television Annual reproduced below: 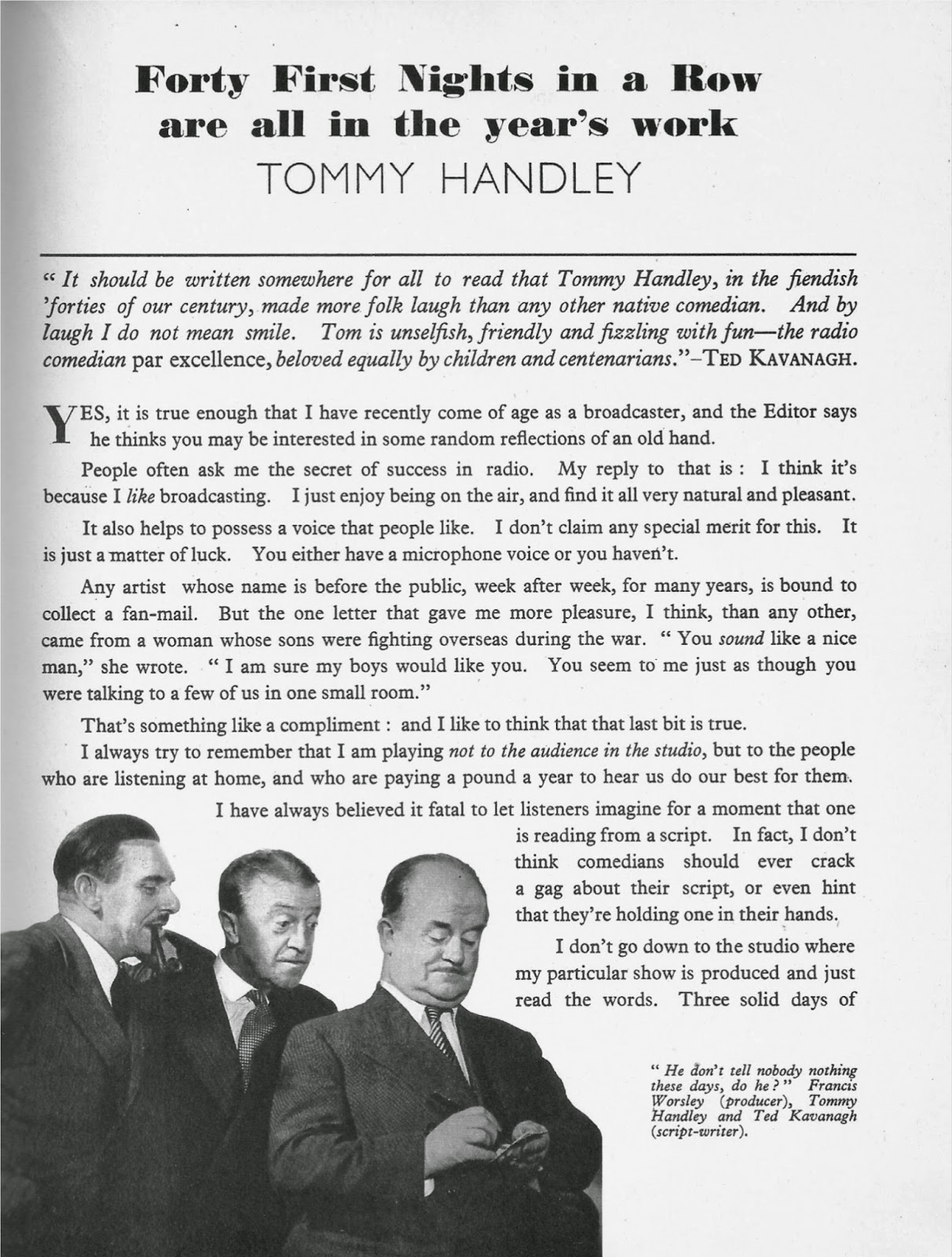 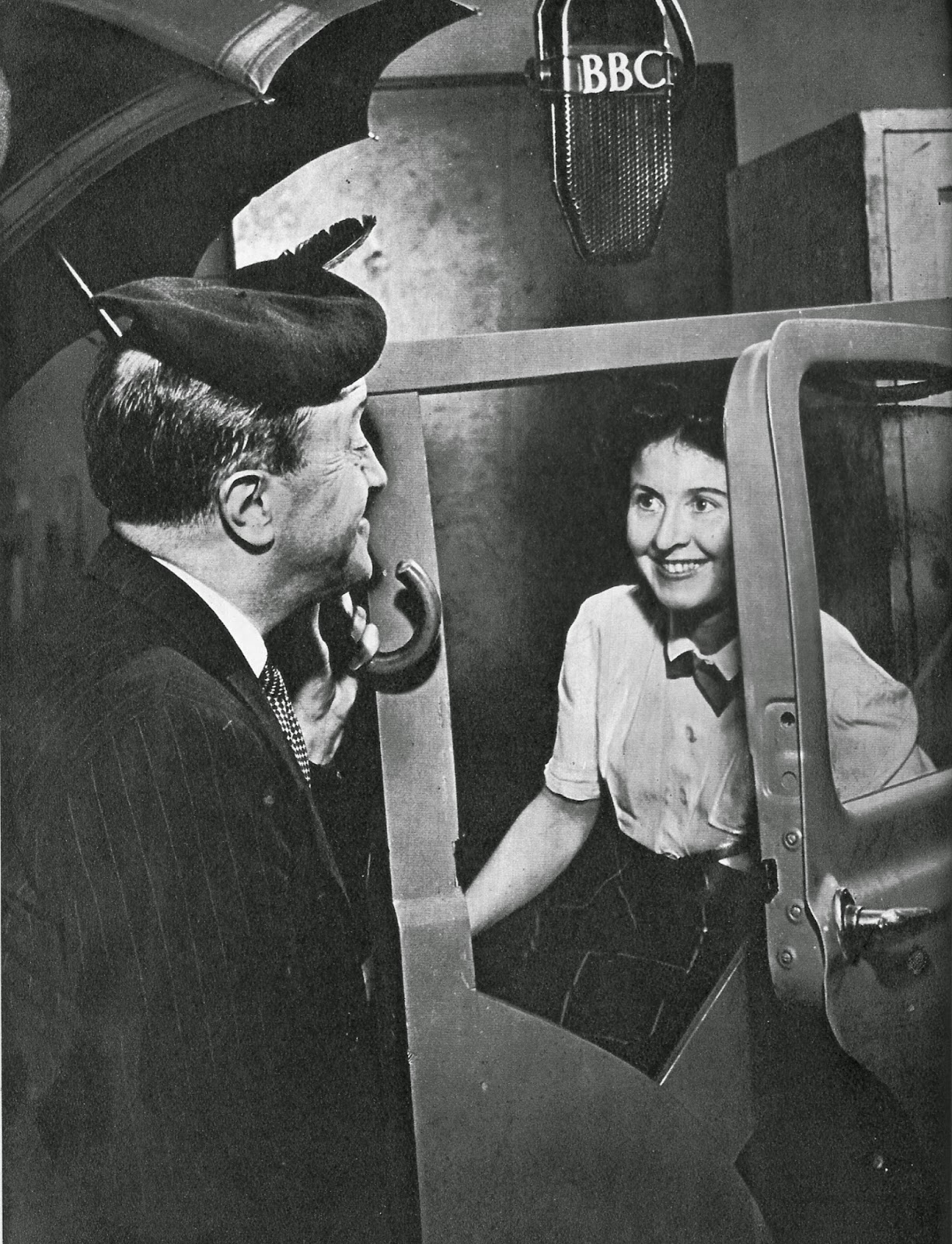 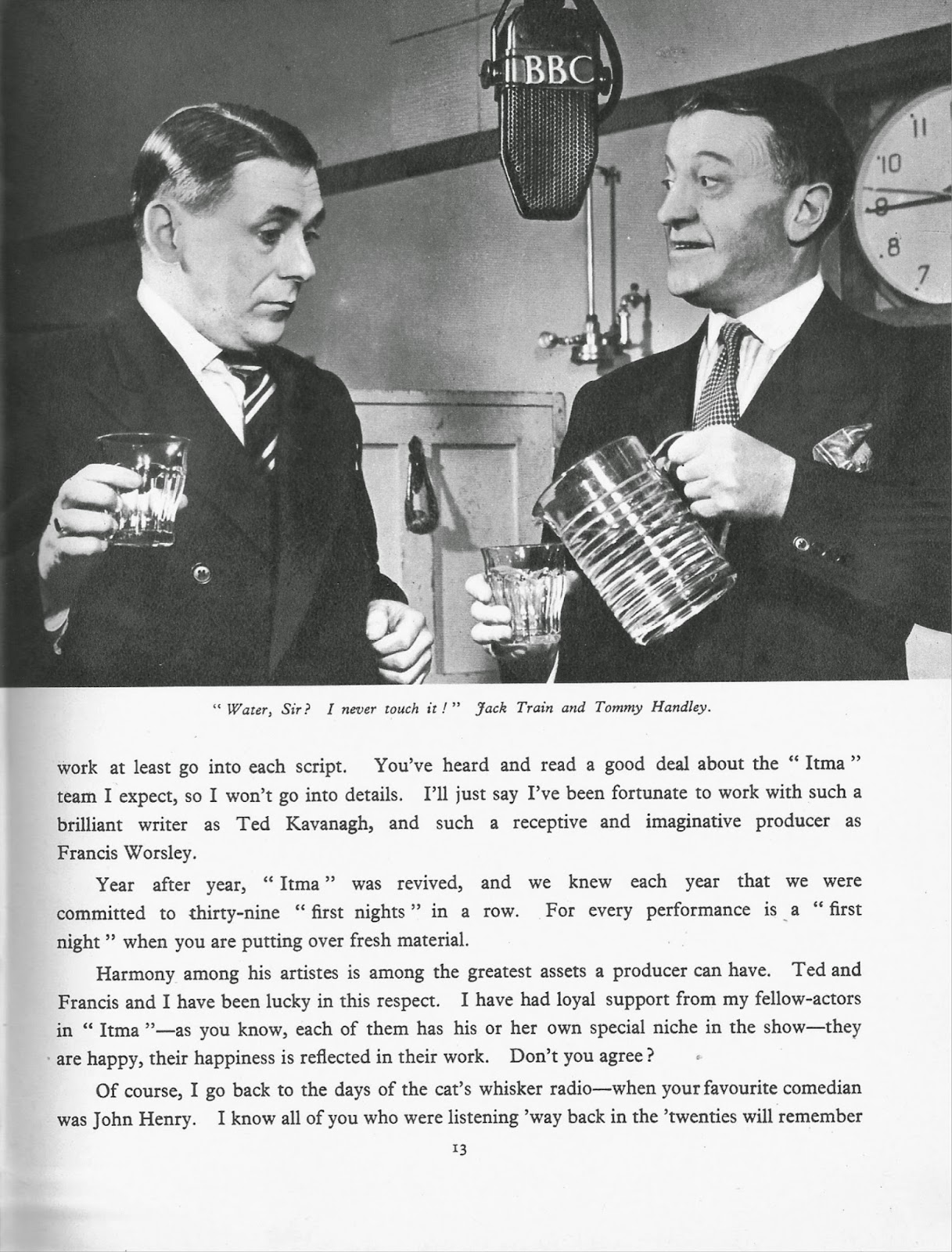 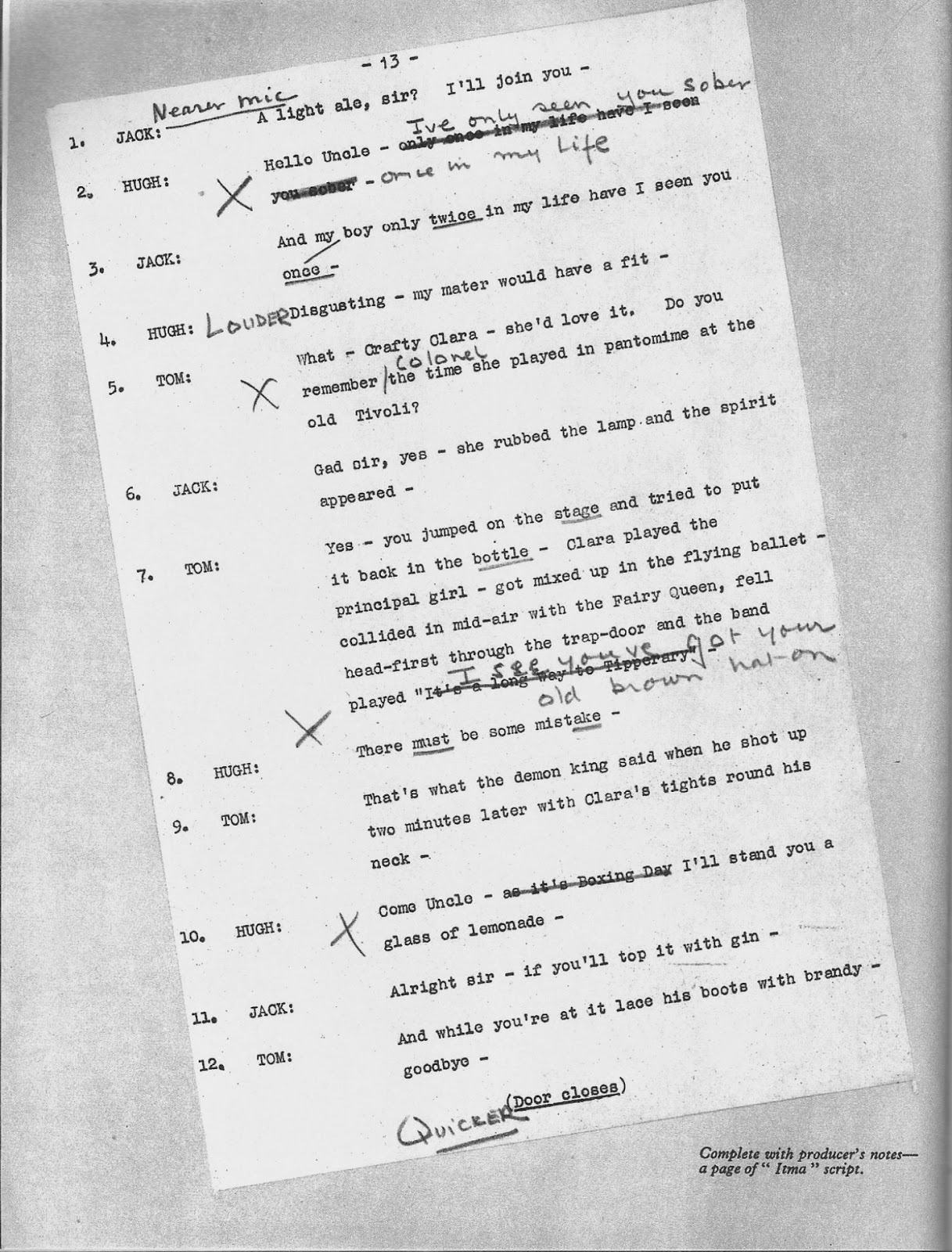 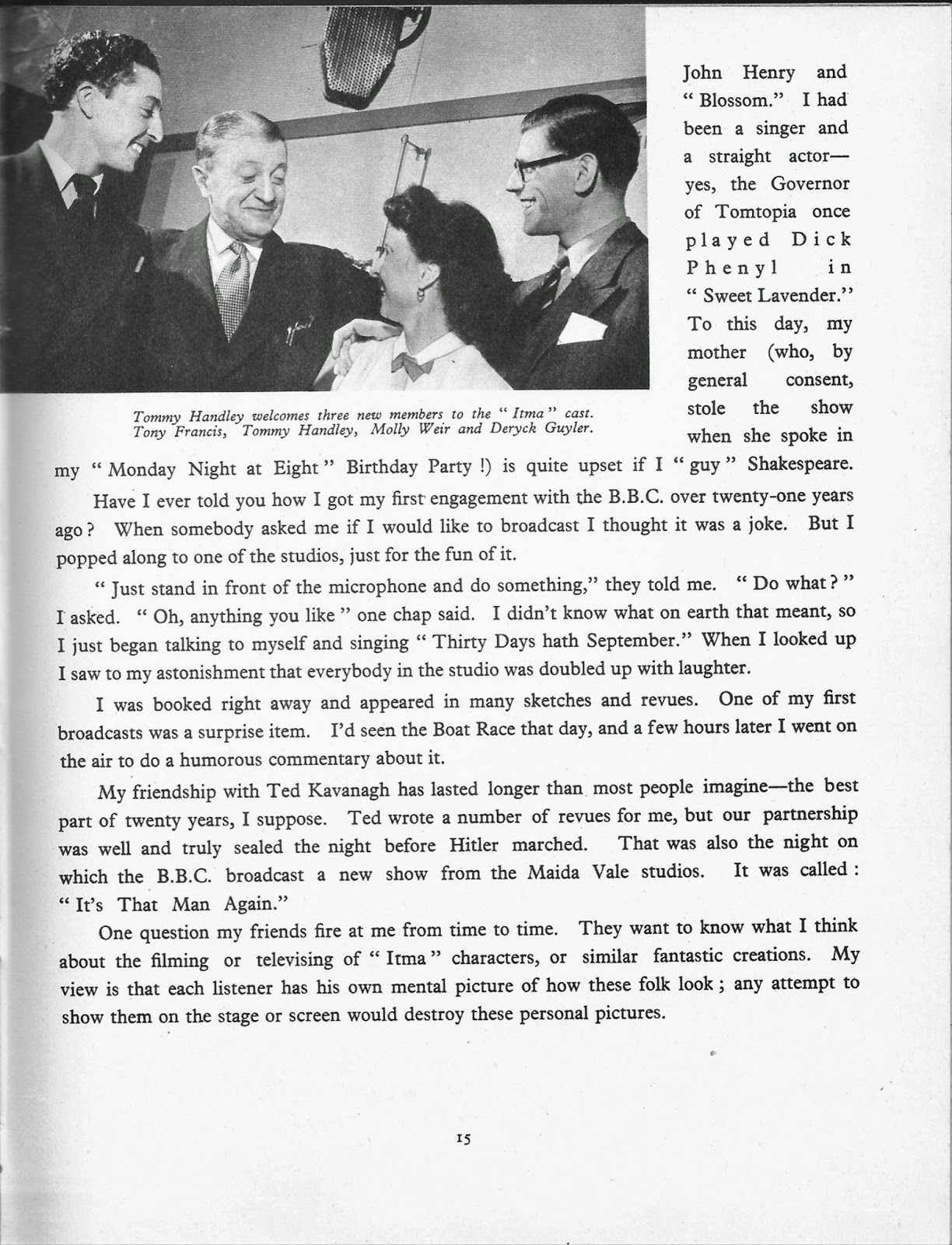 But ITMA wasn’t universally admired. Within the BBC there was much discussion about whether the jokes crossed the line and caused offence. One listener wrote to the Radio Times and opined: “I am constantly amazed by the number of otherwise intelligent people who rave about this programme. I have tried to discover some sort of level of culture or intelligence from which ITMA fans are drawn – but in vain.”  But the programme got the Royal seal of approval when one edition was recorded before a delighted Royal Family in 1942.


The behind the scenes discussions and memos are revealed in this programme from 1979, The ITMA File, based on documents in the BBC Written Archives. Narrated by Gordon Snell, the readings are by Douglas Blackwell, Martin Friend, Garard Green, Roger Hammond, Godfrey Kenton, Peggy Paige and Eva Stuart. Unfortunately my tape of this documentary suffered from numerous audio dropouts. I have rectified most of these but about five minutes of the middle of the programme, from 17:55, are missing. The ITMA File was broadcast on BBC Radio 4 on 24 December 1979.


ITMA came to an abrupt end in January 1949 with the death of Tommy Handley. It’s not overstating the case to say that the nation mourned. As for Ted Kavanagh he’d formed the literary agency Kavanagh Associates that included amongst its signings Denis Norden and Frank Muir. I wonder what happened to them?


At Tommy Handley’s memorial service at St Paul’s the then Bishop of London spoke for those thousands that turned out to pay their respects: “He was one whose genius transmuted the copper of our common experience into the gold of exquisite foolery. His raillery was without cynicism, and his satire without malice. From the highest to the lowest in the land people had found in his programmes an escape from their troubles and anxieties into a world of whimsical nonsense.”

I'll give that show a listen, there are numerous references to ITMA in Dad's Army and didn't Major Chinstrap reappear in The Goon Show some years later?

I think its a show that was very much of its time and was definetely a highlight to many who looked forward to Tommy Handley on the wireless during the war. Humour back then was very different as it is now, I think sometimes we forget how much The Goon Show Round The Horne abd Monty Python changed so much.

You're right Colonel Chinstrap (Jack Train) was in a Goon Show episode.

Of course there were plenty of topical references and even writer Ted Kavanagh said he couldn't always remember why a particular gag had been funny at the time. But that goes for many comedy progs. Listen back to an early Now Show for instance.

The Colonel and Major Bloodnok got on extremely well as I recall it.

The show from the Palace Manchester is very uneven, and ITMA had not, at that time, found its form. Maurice Denham as the char, pre-dated Mrs Mopp - he later said that in the stage show Tom would sometimes call her 'Tess' instead of 'Lola' Tickle!
Not on the wireless though...