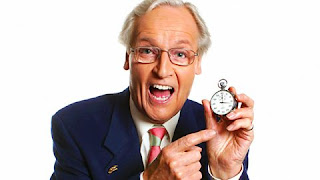 Welcome to Just a Minute! For five decades it's been a case of speaking without hesitation, deviation or repetition. A simple yet frustratingly difficult task that has led to some great comic moments over the 900+ editions that have been heard since Just a Minute first appeared on 22 December 1967.

The programme, devised by Ian Messiter, had had an earlier 1950s radio incarnation under the title One Minute, Please with Roy Plomley, and later Michael Jackson, chairing, though here it was a team game rather than pitting four individual players against each other.

In 1967 Nicholas Parsons was enjoying radio success in the topical satirical comedy series Listen to this Space. Seeking some new challenges he spoke to Ian Messiter who suggested Just a Minute. Getting the green light for the pilot producer David Hatch was called in - David would guide and help shape the programme for its first decade or so - and with Nicholas as one of the panellists it was Jimmy Edwards who was lined up as chairman. In the event Edwards couldn't commit to the show so Nicholas Parsons reluctantly agreed to step in as master of ceremonies, a role he's maintained, apart from some role swapping in early editions, ever since.
The pilot episode was recorded on 16 July 1967 and eventually scheduled as the first edition of a new series to start on Radio 4 that December, thus becoming the newly re-badged network's first bona fide hit.

Here is that first outing of Just a Minute. The panel consists of two participants who would become  regular players and two who never appeared again. Chef, restaurateur, writer and nightclub owner Clement Freud would eventually clock up 544 editions between 1967 and 2009. His game play tactics were running off lists to fill the time, no mean feat without pausing, and buzzing in with a challenge with a second or two to go, though players couldn't see the clock. With him was actor Derek Nimmo (309 editions until 1999) whose regular foreign travels gave him plenty of material to talk for a minute. The third member was actress Beryl Reid who struggled with the concept, proving that actors used to performing from a script don't always make the best exponents of Just a Minute. I've always wondered who exactly the fourth panellists was as I've never heard the name before. In fact it turns out that Wilma Ewart was one of Nicholas's neighbours who had no experience of performing but who he found "witty and entertaining". Wilma makes a decent job on the show but was never asked back as her and husband had to move back to the USA.


The game as played in the early series is not what we now know. The rules took some time to bed in; repetition was counted as repetition of an idea as well as words. For a while you couldn't even repeat the words in the subject title and there were penalty rounds such as speaking on a subject without using certain words but these proved inhibiting.

The third major player of the game joined for the second series when Derek Nimmo couldn't make the recordings due to filming commitments. Producer David Hatch had been convinced of Kenneth Williams' suitability for the game after seeing him on the panel of BBC TV's Call My Bluff and he asked Williams to initially do six programmes. According to Kenneth's diary it seems it was a somewhat reluctant agreement: "unfortunately it means working with that Parsons fellow, but I said yes, 'cos it will be a nice fill-in". His attitude to the chairman had mellowed somewhat by the time of the recording and it also touches on the fact that Hatch would have to had to continually keep Kenneth happy and praise his contributions: "... when we came to the performance I just about managed and scraped through. But Nicholas was a great help and so was Clemet Freud. David Hatch was very nice to me before (when I was actually v. nervous) and afterwards. I like him very much - always have actually".

With Williams on board the show was increasingly played for laughs rather than just been a rules-based parlour game. His flamboyant style, his appeals to the audience, those elongated vowels and then rattling along at top speed became his game trademarks. Williams even unwittingly introduced some catchphrases that are remembered to this day and only recently were referenced by Paul Merton and Sheila Hancock: "I'm a cult figure". "I haven't come all the way from Great Portland Street...". "It's a disgrace" when, unreasonably to him, challenged or losing an appeal. And "we shouldn't have women on this show", initially aimed at the 'lovely Aimi Macdonald'. Kenny appeared on 346 radio episodes between 1968 and 1988.

In 1992 the programme celebrated its silver anniversary with a 2-part retrospective, Silver Minutes. This is part one from 20 July 1992 (though this is the commercially released version).


The fourth member of what was seen for many years as the 'classic line-up' - was Peter Jones, who joined the show in 1971, again to fill a gap left by a busy Nimmo. He had a more laid back approach to the game and was often willing to sit back whilst the other fought it out only to buzz in with a very funny or acerbic comment. His talks always seemed to start with "well..." I recall. Peter made 326 appearances until 2000.

That so-called classic line-up appeared together in just 38 episodes so there were always guest slots to fill. Some became semi-regulars and the longest-serving of these is Sheila Hancock who, like Nicholas Parsons spans the five decades, appearing on the second edition of the first series in December 1967 through to a couple of shows in the latest series, the 79th, this autumn.

This is the second of the Silver Minutes programmes originally broadcast on 27 July 1992.


With the gradual loss of Kenneth Williams in 1988 there was a vacancy for a regular player. Comedian Paul Merton had been an avid fan of the show for years and had recorded and constantly replayed episodes to himself. Convinced that he could contribute to the show he wrote to the then producer Edward Taylor. At the same time he'd appeared as a panellist on the TV game show Scruples on which Nick also appeared (BBC Genome would suggest this was the 30 October 1988 edition) and he mentioned how much he loved Just a Minute. Paul's flights of surrealist fancy and running gags opened up the show and in recent years, alongside that other semi-regular Gyles Brandreth, it has tended to be comedians on the panel.

The programmes longevity can be put down to the fact that one, it is a simple concept and two, that it has slowly evolved. Nicholas Parsons, with a long history in the business has, to be fair, be very astute in recognising the fact that the show needed to change to survive. Indeed in his book on the programme he is very honest about the run-ins he had with Clement Freud who still wanted to play strictly by the rules as first laid down by Ian Messiter. Parsons recognised that much of the laughter comes from the challenges, whether valid or not.

The first series of Just a Minute that I committed to tape was the 14th that aired between December 1979 and March 1980. Playing alongside Williams, Nimmo, Jones and Freud were Sheila Hancock, Aimi Macdonald, Tim Rice, Patrick Moore, Lance Percival, Barry Cryer and John Junkin. Making their only appearances in the programme's history were Peter Cook, Bob Monkhouse, Rob Buckman and Kenny Everett.


Of course the real star, and the one constant, throughout the run has been Nicholas Parsons, still sounding as strong, if a little less posh, as he did in 1967. "I enjoy the position of chairman so much", he says in next week's issue of the Radio Times. "It's the greatest effort of concentration of any job I have. I'm listening intently and can see the way people's minds are working when they have a subject. We, as professionals, make it look easy and sound fun, but it's an incredibly difficult game."

I can't do justice to the programme's 50 year history in such a short post so I can direct you to the superb Just a Minute website. Nicholas Parson's own history of the programme Welcome to Just a Minute was first published in 2014 and is available in hardback, paperback and Kindle editions

There are some special programmes over the holiday season marking JAM's 50th. On Radio 4 on Christmas Day Just a Minute: 50 Years in 28 minutes. On Radio 4 Extra on New Year's Eve a repeat of a 1952 edition of One Minute, Please. And on New Year's Day on Radio 4 Nicholas Parsons in Conversation with Paul Merton.

Thank you so very much. I have just recently started listening to the BBC archives and the 22-12-67 programme (I was just five months old) puzzled me greatly. The masterful Freud and Nimmo, beautiful Beril Reid, and Wilma Ewert?? Who was that? I searched for days before you enlightened me. Nicholas' neighbour! Goodness me, what a quiz question that would be. THanks again.