Looking for present ideas for the radio enthusiast in your life or wanting to drop hints to your loved ones about what to buy you this Christmas, then here are some book suggestions published in the last few months.

A number of radio personalities have taken the opportunity of Covid-19 lockdown to finish their autobiographies and these have caught my eye.

The queen of Radio 1 celebrated fifty years on the station this year. Here she tells us about her 60s forays into journalism and broadcasting, her break into Radio 1 and the stars and musicians she's met along the way, from the Beatles to Billie Eilish.

Last month Annie spoke to Nick Grimshaw about her career and favourite music. She speaks to Zoe Ball on Radio 2 later this month.

Self-confessed "announcer guy, voice of God, gob on a stick, vocal prostitute" offers this frank and funny review of his radio and voiceover career.

Kid Jensen: For the Record by David Jensen

From Jensen's Dimensions and the Rhythm Pals to the Network Chart and the Flashback 40 the Kid has been on the radio for five decades. More recently David has been battling with Parkinson's disease and a share of the proceeds from each sale will go the Parkinson's UK.  Available from Little Wing Books.

The Kid spoke to Steve Wright this week.

David has already written about his time on the nation's favourite in The Golden Days of Radio One and this latest volume takes the story further and recalls some of the dozens of other stations that Diddy has appeared on. Initially only available for Kindle its now out as a paperback from Ashwater Press.

Earlier this year David spoke to Alan Jarvie about his book. 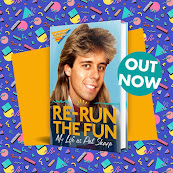 Re-Run the Fun: My Life as Pat Sharp by Pat Sharp

Don't be misled into thinking that this is Pat's autobiography, it only bears a passing resemblance to what actually happened purporting to be an 'untrue' book.

Last month Pat, by the sounds of it sitting in his bathroom, spoke to Chris Moyles on Radio X.

Life's What You Make It by Phillip Schofield

Although better known for the Broom Cupboard and This Morning the Schofe was on the radio in New Zealand and enjoyed a four year stint on Radio 1 (1988-92) including achieving his ambition of hosting the roadshow from Newquay where he'd grown up and watched the show as a teenager.

Before the madness of TV-am's Wacaday, Timmy on the Tranny had started on BBC Radio Oxford then Centre Radio and up to Piccadilly. One-time helper on Timmy's show at Piccadilly Chris Evans (Nobby Nolevel) spoke to Timmy on his Virgin Radio show back in January. Interview on YouTube here.

Other books from radio folk published this year include:

Why Can’t We All Just Get Along: Shout Less. Listen More by Iain Dale

How Not To Be Wrong: The Art of Changing Your Mind by James O'Brien

Finally, if you don't already have a copy then please consider:

Radio Secrets and Radio Moments both by David Lloyd

Email ThisBlogThis!Share to TwitterShare to FacebookShare to Pinterest
Labels: Christmas