Down You Local - 50 Years of BBC Radio Newcastle

Unusually for a station launch 2 January 1971 was a Saturday. Neighbouring Radio Teesside was also supposed to have started on the same date but in the end they squeaked in just a few hours before the end of 1970. The north-east was super served by BBC local stations as Radio Durham was still on air having gone live in 1968, though it would close in August 1972.

Newcastle had a long history as a broadcasting centre with station 5NO going on air on Christmas Eve 1922. Three years later on 23 December 1925 the Corporation opened up its broadcasting centre at 54 New Bridge Street housed in a former maternity hospital. They remained there until the new broadcasting centre on Barrack Road, dubbed The Pink Palace, opened in 1986. The new radio station was originally based in Crestina House on Archbold Terrace (originally Archbold House) which it shared with an insurance company and a branch of the Midland Bank.

The first station manager was an old BBC hand Richard Kelly. Kelly has joined the BBC in 1948 and was a Newcastle based producer for the North Home Service whose credits included the variety show  Wot Cheor Geordie, Barn Dance and the ground-breaking Voice of the People with Harold Williamson. His deputy was programme organiser Ted Gorton, ex-Radio Sheffield who went on to manage Radio Oxford.

Although the station officially went on air in January like the rest of the BBC local stations that opened that winter they had all unofficially appeared at intervals beforehand to provide public service on the weather conditions and power cuts.

I've no Radio Times programme schedule for the start of Radio Newcastle but this is how  it looked in December 1971. 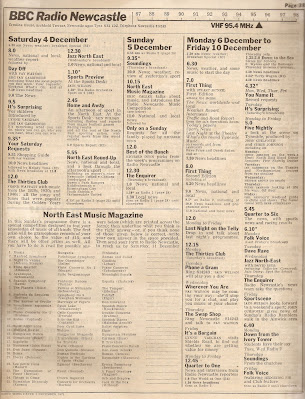 There's a very familiar name in the line-up, that of Frank Wappat with The Thirties Club. Frank was the station's longest-serving broadcaster until his retirement in 2010. The double Sony Award winning broadcaster is also remembered for Frank Wappat at Large, Songs for Singing, The Gospel Show and his show as part of the BBC Night Network.

An article for the January 1975 issue of Script magazine told us that Frank was a "leading light of the Al Bowley Appreciation Society and a leading expert in 30s music. The programme, covering music from the 20s to the mid-fifties, emerged from a memory lane spot and now is a twice weekly hour-long show. The club runs its own very successful twice weekly disco at a local venue, where members are encourage to reminisce. Title of the club Wappat stressed is The Thirties Club, not the over-thirties. In fact, over 50% of the club is under 30, having first heard the music on Frank's programme. The editor of the Al Bowley Appreciation Society Magazine is only 25. It's not treated as old music for old people, but simply good music, for all ages."

To mark Frank's forced retirement due to ill-health Michael Poulter introduced this special programme in 2010. Frank died in 2014.

Co-presenter of Day Off on Saturday morning was Fay Watson who along with Dick Godfrey were the first voices heard on the station. Dick would later produce the contemporary music show Bedrock that championed local music.

With Fay on Day Off is Ian Gardhouse who a couple of years later joined Radio 4 as a producer (Start the Week, Stop the Week and Loose Ends) 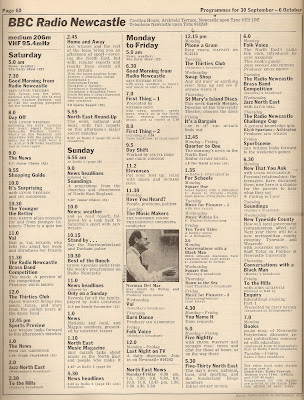 Presenting the Saturday morning children's show (obligatory programming for all the BBC local stations) was Phil Martin. Phil was an offshore pirate broadcaster at Britain Radio, Radio England and Radio 355 before joining the Daily Express as a journalist. It was working out of their Newcastle office that brought him to the BBC. In 1978/79 he hosted the breakfast show AM with PM before joining Tyne-Tees.

The Saturday feature Val  in which she "tells you about her week and introduces her friends"  is actress Val Mclane (When the Boat Comes In, Auf Wiedersehen, Pet and founder of Newcastle's Live Theatre Company) and sister of Jimmy Nail.

Co-presenting Five-Nightly with Frank Wappat is Richard (Dickie) Pigg. He'd joined the BBC in the 1960s in the Transcription Services before becoming a vision mixer. With Radio Newcastle from the start he took part in one stunt to promote the new service that "involved an on-air parachute jump. After an extended training course, Dickie was fitted with a radio mic to provide a running commentary all the way down, later joking the engineers were more concerned about the safety of their precious kit than how hard he hit the ground". 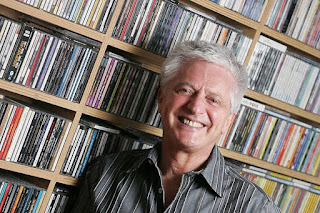 And finally I must mention Paddy MacDee who was heard across the north-east for five decades. He joined Radio Teesside in 1973  then moved over to Metro Radio in 1978 and re-joined the BBC at Radio Newcastle in the mid-80s. His Sunday Solid Gold show came to an end in March when the schedules were paired down to cope with the Covid-19 pandemic and he retired in July.

Radio Newcastle is marking its 50th birthday with a specialone-hour programme with Simon Logan at 10 am today (with 3 repeats and also available on BBC Sounds).

You have missed a few contributors, one was Bill Weeks, a lecturer at Newcastle University. Bill was a mine of information about many subjects; an interesting character.

Thank you for mentioning Bill. I've added his name. There are of course dozens of others I could mention. Suggestions and memories all welcome.

The fun days. I was a young freelance did live inserts into the Saturday sports show with Iain Wilson on Gateshead and in the summer reports on Northumberland cricket in the minor counties.

It was marvellous reading about the great presenters, staff etc working for BBC Radio Newcastle. My husband and I were keen listeners to Frank Wappat and thoroughly enjoyed his programmes, they were fun, knowledgeable and inspirational. It was a sad day when Frank at 80 years old retired. We still miss his warm genuine voice but, certainly his legend lives on. Good luck BBC radio Newcastle and Happy Anniversary.