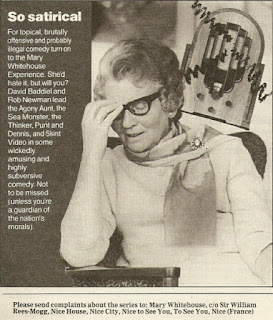 It was nearly The William Rees-Mogg Experience, just in case the guardian of the nation’s morals took legal action. She didn’t.


The Mary Whitehouse Experience burst onto the scene in 1989. Spurred on by the success of the stand-up show Hey Rrradio!!! Radio 1 controller Johnny Beerling asked producer Bill Dare to develop a “sharper, more focussed” show. The performers were comedy duos David Baddiel and Rob Newman with Steve Punt and Hugh Dennis. They were joined in series one by Jo Brand (still sometimes billed as The Sea Monster), Mark Thomas and Skint Video.

This is the first programme in series one broadcast on 7 April 1989. It went out tucked away at midnight, sandwiched between Tommy Vance’s’ The Friday Rock Show and The Rankin’ Miss P.

Baddiel has yet to fully adopt his acerbic political rants whilst Newman does little more than the odd impression (Shaw Taylor, Melvyn Bragg and Ben Elton). Punt and Dennis do their familiar topical satire shtick that they would later transfer to It’s Been a Bad Week and The Now Show.

Read more about The Mary Whitehouse Experience in Tim Worthington’s book Fun at One: TheStory of Radio Comedy at Radio 1.