By Arrangement With Maurice Winnick

As a sidebar to the Gilbert Harding post I noticed that the Radio Times billings for What’s My Line and Twenty Questions would always include the credit: “by arrangement with Maurice Winnick”. But who was Maurice Winnick? 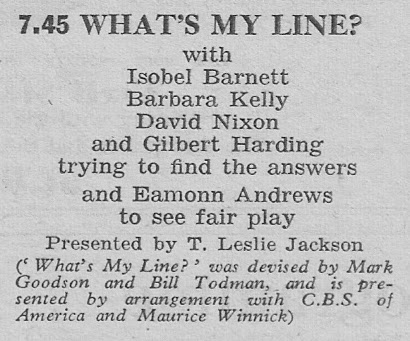 During the 1930s Winnick was a saxophonist and violinist who had formed his own band and began broadcasting with his Piccadilly Hotel Band, modelling his sound on that of Guy Lombardo. Playing with his later Dorchester Hotel Band was Ted Heath and both Don Lusher, Robert Farnon and Norrie Paramor were, at one time or another, employed by Winnick. Featured vocalists included Al Bowlly, Sam Costa, Harry Bentley, Judy Shirley, Vera Lynn, Hughie Diamond and Ronnie Odell. The Maurice Winnick Orchestra continued to broadcast regularly on the Light Programme until 1950.

After the war Winnick eventually disbanded his own orchestra and became an impresario and a leading packager of programmes for radio and television, buying the UK rights for US produced series. The phrase “by arrangement with Maurice Winnick” was heard on BBC radio programmes such as Ignorance is Bliss (first aired in 1946), based on the US series It Pays to be Ignorant, Twenty Questions (1947) and The Name’s the Same (1953), also based on an American original format. For BBC television there was What’s My Line (1951) - a radio version was also produced, for Radio Luxembourg, between 1952 and 1955.


In 1954 Winnick was part of the Kemsley-Winnick consortium bidding for the newly advertised commercial television contract for weekends in the Midlands and the North; an alliance with Sunday Times owner Lord Kemsley and Isaac Wolfson of Great Universal Stores, with John McMillan, formerly Chief Assistant on the Light Programme, as General Manager. Winnick’s involvement came about from an introduction by Kemsley’s stepdaughter Ghislaine Alexander, who had been a panellist on What’s My Line.


The individuals concerned in the bid didn’t get on with each other and eventually Wolfson left and then Kemsley pulled the plug by withdrawing his financial support. The ITA went on to award the licence to the Associated British Picture Corporation (broadcasting as ABC Television).  However, Winnick did make it to commercial television in a way, as he produced at least two of their many early game shows: Two for the Money (1956-7) and I've Got a Secret (1956) with regular panellists Jon Pertwee, Catherine Boyle, Dick Bentley and Zoe Gail, both series based on US formats.