The Rudest Man in Britain 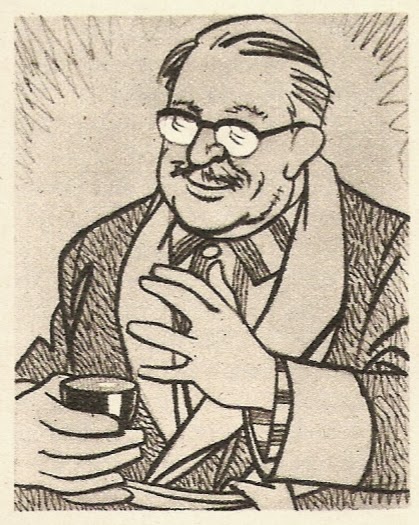 This is the man who signed off from one radio show with: “I'm fed up with this idiotic game; as for the score, if you've been listening you won't need it; if you haven't, you won't want it. I'm going home."  And of one contestant on TV responded with “I’m tired of looking at you.” Yet he was one of the biggest personalities of 1950s Britain, and undoubtedly the first big star of the post-war television service.


‘Irascible’ is the oft-used description for Gilbert Harding’s character.  A former colleague, Leonard Miall, went on to say he was “arrogant and rude. He bullied people shamelessly. As like as not he would be the worse for alcohol, and he was prone to lose his temper. Yet he had great personal charm and a very well-stocked mind”.  Despite his fame, and it was widespread, much like Kenneth Williams and the Carry On films a decade later, he seemingly despised the medium he appeared on, yet thrived on it too.
John Snagge, for many years the ‘Voice of the BBC’, took the view that Gilbert was “a Regency period character, throughout, and his rudeness was studied: not merely vulgar abuse. At one time he was talking to my father, and a man came up and patted him on the shoulder. Gilbert turned, and didn’t say anything like ‘Go away, I’m busy’ or ‘Why the hell d’you interrupt?’ He just looked at the man and said ‘What emporium of so-called education does that tie come from?’”


Harding joined the BBC in the early days of the war. Aged 32 he’d already had a number of teaching jobs in England, France and Canada, a brief spell as a policeman, been a stringer for The Times whilst on a teaching assignment in Cyprus and was studying for his final law examinations when war broke out.
Now with the newly formed BBC Monitoring Service - Harding spoke French, German, Greek and Turkish -he was based at Broadcasting House on the team compiling the Daily Digest of Foreign Broadcasts. When the team was evacuated out to Woods Norton, near Evesham, Harding worked on the Cabinet Report analysis for the War Cabinet and would sometimes be telephoned directly by Churchill who once asked for “that man with the succinct mind.”


In 1942 Harding moved to the Outside Broadcasts Department, where he shared an office with Raymond Glendenning. Here he made The Microphone Wants to Know, a series of radio features about wartime life on the home front broadcast on the Home Service, plus Meet John Londoner, with “on-the-street” interviews and Behind the Battlefront, both of which were syndicated to North American stations.
Within a couple of years Harding applied for a new post in Toronto as the Assistant to the BBC’s Canadian Representative. Here he would choose suitable Canadians for Commonwealth radio hook-ups and did PR work for the Corporation, for which he was perhaps not the ideal choice – “this Englishman who thinks that because half the world is painted red, he owns it”. 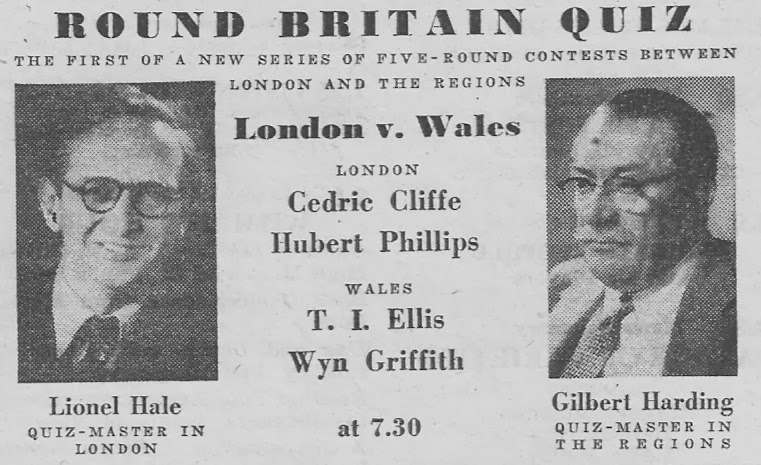 Back in the UK by 1947 he went freelance and soon slotted into roles that would define his career, as chairman or panellist on quizzes and game shows. There was the successor to Transatlantic Quiz, in which Alistair Cooke in New York and Lionel Hale in London had posed the questions. For lack of dollars the BBC abandoned the programme and devised Round Britain Quiz (first broadcast 2 November 1947), still with Lionel Hale in London but with Gilbert taking on the role of peripatetic quizmaster in the regions.  In 1948 he chaired the revived Brains Trust and a couple of years later took over from Stewart MacPherson as chair on what was to be another long-running show, Twenty Questions.

Both radio and television were stuffed full of panel games at this time and in 1950 Gilbert joined We Beg to Differ. This set women against men in a “lively discussion on subjects upon which the sexes may disagree”. The chairman was Roy ‘Desert Island Discs’ Plomley and regular panellists included the husband and wife acting team of Kay Hammond and John Clements followed a year later by another married couple, Bernard Braden and Barbara Kelly. 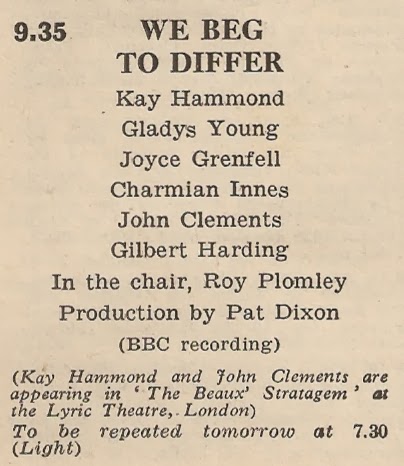 But it was the early TV success of What’s My Line that made Gilbert a household name, the Sunday evening broadcasts drawing in millions of viewers. Whilst those at home could play along with the panel and guess the mystery occupation it was Harding that became the main draw. Miall recalls: “They were waiting to see how soon Gilbert Harding’s temper would explode, as it nearly always did, especially if a person he was interrogating employed a coy circumlocution or misused the English language. He was a verbal sadist. He used to refer to himself as a ‘tele-phony’”,
He secured support at the highest level of the Corporation. On one occasion the D-G Sir Ian Jacob batted back a complaint as follows:


"Mr Harding is somewhat of an eccentric and there are times when his attitude and bearing go beyond what is proper even in a light entertainment programme; but his characteristics are well-known, and on balance it seems to me better to have someone who, though he may occasionally annoy and irritate, can also stimulate, rather than fall back on a flat level of boring propriety". 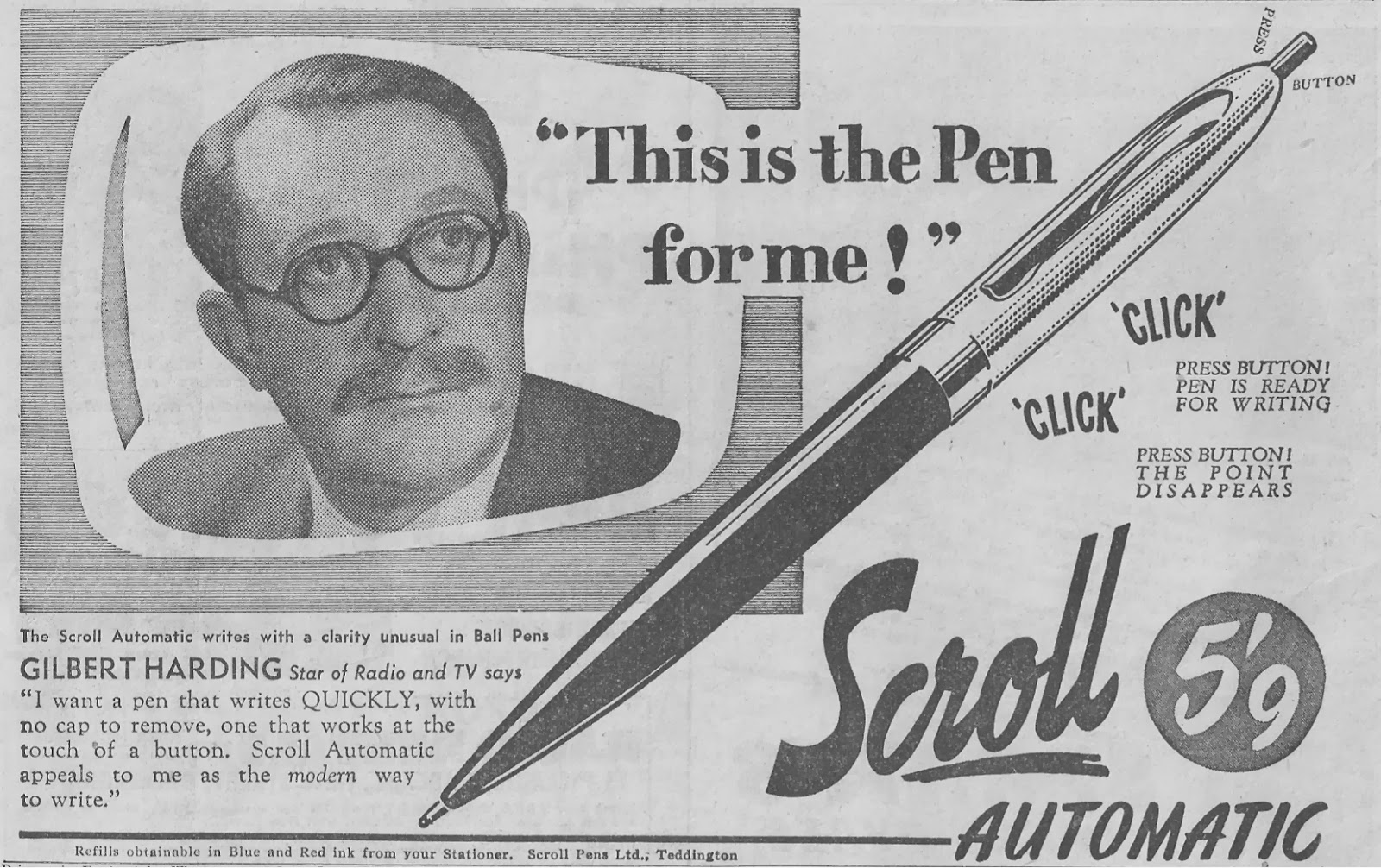 His fame during the decade led to his face being plastered on many an advert to endorse a range of products, “from Kraft Salad Cream to Basildon Bond writing paper”.  Apparently he became so associated with Macleans Double-Action Indigestion Tablets that customers would pop into Boots and ask for “those Gilbert Harding Tablets”. 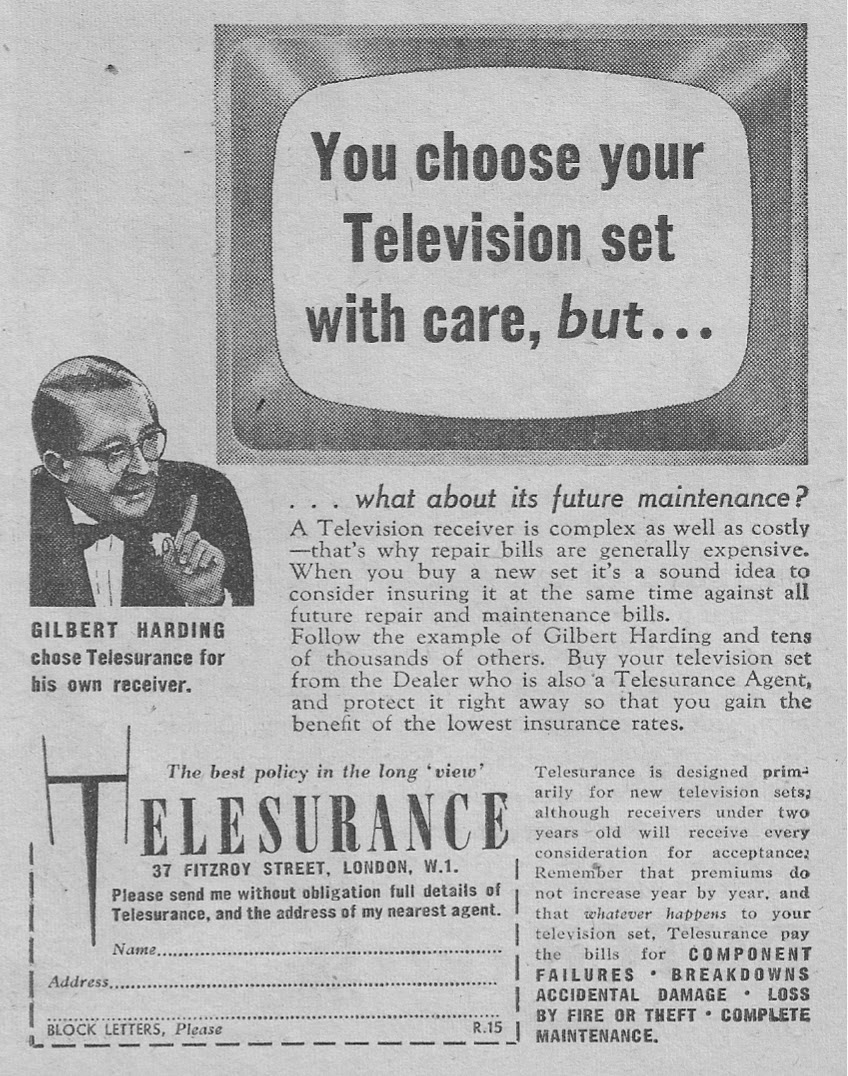 Harding appeared in a number of films, often playing himself, such as the Ealing’s anti-TV satire Meet Mr Lucifer. Other radio work included record request shows Housewives’ Choice and Purely for Pleasure, a series of interviews imaginatively titled The Harding Interviews and guest appearances on three editions of Educating Archie, all on the Light Programme. His other TV work included the Huw Wheldon-produced Harding Finds Out, an unsuccessful series in which he dealt with complaints submitted by viewers, I Know What I Like and Who Said That?
Most of Harding’s work has not survived; indeed most of it was live anyway, so if he is remembered at all it is through the close-up lens of his Face to Face interview with John Freeman in 1960. Famously Harding was reduced to tears, though the reasons surrounding this incident are often mis-reported.  Freeman had intended to hint at Harding’s homosexuality. He knew that Harding had not served in the armed forces during the war and knowing that overtly homosexual men were not normally called-up, Freeman took an indirect approach by asking if he’d ever seen anyone die. Unfortunately Freeman had overlooked that Gilbert’s mother had died the week before, much to his evident distress on camera.


Just a little under two months after the Face to Face programme Harding was leaving Broadcasting House after recording two editions of Round Britain Quiz when he dropped dead from a heart attack. Oddly even his dying moments are variously reported; The Times stating that that “only his chauffeur was with him” but elsewhere it is said he was waiting for a taxi or that he collapsed into the arms of BBC producer and old friend from Cambridge, Christopher Saltmarshe.  No matter what the circumstances of his death the memory of Gilbert Harding, much like the hundreds of programmes he appeared on, just drifted off into the ether. His face and his voice are so evocative of the decade that it is perhaps timely that he died before the Sixties started to swing, what would he have made of it one wonders?
This weekend BBC Radio 4 Extra remembers the life and career of Gilbert Harding when Simon Fanshawe presents The Rudest Man in Britain. There are excerpts from Round Britain Quiz, What’s My Line and Brains Trust, a complete edition of Twenty Questions, the Face to Face interview and Stephen Wyatt’s 2005 Afternoon Theatre play Dr Brighton and Mr Harding.

References:
Inside the BBC by Leonard Miall (1994)
Those Vintage Years of Radio by John Snagge & Michael Barsley (1972)
Armchair Nation by Joe Moran (2013)

Roy Plomley paid some nice tributes to Gilbert in his book Desert Island Discs recalling the abrupt and kind nature of the man. By the sounds of it he had two sides like most people - and I love the story about the tie - he evidently didnt suffer fools gladly.