Next week sees the culmination of the 2014 battle to be Brain of Britain.  ‘Brain’ is the UK’s second-longest running quiz after Round Britain Quiz, though it likes claim itself as the longest-running quiz “open to the public.” 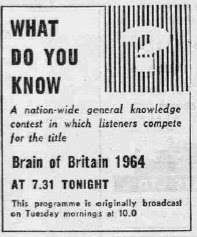 Its origins lie in the Light Programme show What Do You Know?, billed as “a programme of problems and brain-teasers devised for your entertainment”, first broadcast in 1953. Devised by John P. Wynn and chaired by Franklin Engelmann it was originally in two parts: Beat the Experts and Ask Me Another, which was the quiz played between contestants “representing all parts of the British Isles”. In the first programme the panel of experts were Dilys Powell, Ivor Brown and Christopher Cummings. Ask Me Another was spun-off as a TV series in 1958 – also chaired by Engelmann and making resident expert Ted Moult a household name - and it was this quiz element for which, by the late 1950s, contestants would compete for the title of Brain of Britain, the prize at that time being a diploma.


For the 1968 series What Do You Know? became Brain of Britain, the new title “seems to be more indicative of the contest” explained producer Joan Clark. The programme remained unchanged until the death of Engelmann in 1972 and Robert Robinson took over as chairman – not sure if this was part way through the 1972 series or not. It’s Mr Robinson who is now most closely associated with the show and this recording comes from the 1980 series, complete with the souped-up Waldo de los Rios version of the theme tune.  (Previously posted under Radio Lives – RobertRobinson).


Robinson would always refer to the quiz as ‘Brian’. “When I receive BBC communications about it the first word is often mis-typed as ‘Brian’, he told the Radio Times in 1985. “Thinking of it as Brian of Britain is like recalling an old friend. The shedding of miscellaneous information is what I do best. I’m not sure whether it’s a gift or an affliction.”  His final edition aired on 19 January 2009, and he died a little over two years later.


The final of the current series chaired by Russell Davies is on Radio 4 next Monday afternoon.

For the Record
What Do You Know? ran from Sunday 2 August 1953 to Sunday 16 July 1967 on the BBC Light Programme. The Grand Finale was on 2 July followed by two special challenge matches in which the three finalists played against teams from The World at One and Any Questions.