Going Back in Time, It’s a Caroline Flashback

Fifty years ago today the sound of British radio changed forever with the launch of Radio Caroline. It was the start of a brief three year starburst of offshore radio activity. Derring-do on the high seas, an explosion of British pop music, swinging jingles and flouting the law. For those broadcasting and listening it was an exciting time.


Pirate radio kick-started the careers of dozens of DJs who’d go on to work for Auntie Beeb or the early ILR stations, and a fair few TV continuity announcers too. The mid-Atlantic style was heavily influenced by aping Stateside DJs (not to mention a great deal of Australian and Canadian input), liberal use of PAMS jingles, self-op desks and strip programming all set the template when Radio 1 hit the airwaves in late 1967.


Caroline wasn’t the first offshore pirate station, there’d been Scandinavian and Dutch based offerings such as Radio Mercur, Radio Nord and Radio Veronica. But Caroline made history as the first station to offer an English service with live shows from the ship, trumping rivals Radio Atlanta on air by 46 days. 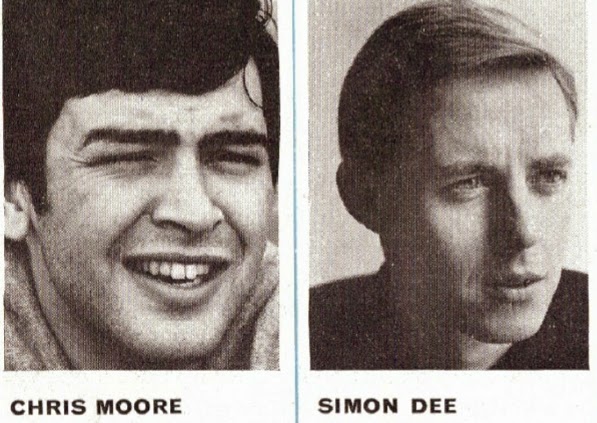 The first voice on Radio Caroline that Saturday back in 1964 was Simon Dee – “this is Radio Caroline on 199, your all-day music station” – though technically he was beaten to it, if you count the test transmissions they made on Good Friday, by a taped show from John Junkin. The comedy writer and one third of Hello Cheeky was briefly a Caroline DJ recording shows in London with the tapes being shipped out to the station for later broadcast.


But listening back to the airchecks of the fledgling Caroline service you’d be hard pressed to spot the difference between it and the BBC Light Programme, punctuating the pop tunes are orchestral pieces, easy listening classics, show tunes and jazz. The pace was slow, subdued almost, there was no chat just straight announcements and, for the first month, no commercials (the first main ad being for Bulova watches, “when you know what makes a watch tick you’ll buy a Bulova”).  But the attraction of an all-music station proved an immediate success: over 20,000 letters were received at Caroline’s London offices during the first fortnight and the audience was estimated at seven million.


Here are some clips from that opening weekend:

Following the Caroline/Atlanta merger (forced by the lack of advertising) in the summer of 64 there were two Caroline ships, one anchored off Harwich and one off Ramsey. DJ Keith Skues recalled “Caroline North was a very successful station and had a large audience, the DJs on the north ship had complete freedom from Ronan [O’Rahilly] to choose and play the music they know their listeners wanted to hear. [Allan] Crawford was very keen to ensure, as a music publisher, that his Merit Music records were regularly played on Caroline South. The station played more middle-of-the-road music with songs from shows and film soundtracks.”


Meanwhile … Back on Land
For those that remember the 60s pirates the reason they tuned in was to hear pop music no matter what the time of day. The BBC was hidebound by needle-time restrictions and MU agreements. But what, exactly, did the BBC offer when Caroline launched? Checking the Easter issue of the Radio Times (and the listings for the Light Programme) offers some clues, though, of course, I’ve no idea as to what records they did or didn’t play. 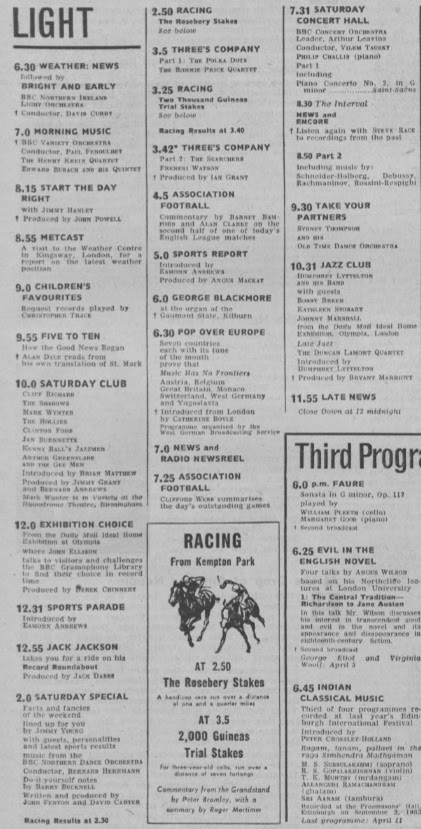 On the Saturday it was light music all the way until 9 a.m. when it was time for Children’s Favourite’s. Perhaps guest presenter, Blue Peter’s Christopher Trace, played some pop along with Nellie the Elephant?


There was guaranteed pop at 10 a.m. with two hours of Saturday Club. Brian Matthews guests were Cliff and the Shadows, Mark Wynter, The Hollies and Kenny Ball. Brain also popped up on Sunday morning with Easy Beat featuring Adam Faith, The Bachelors, The Caravelles and, no doubt providing some cover versions, the Johnny Howard Band.


At the moment that Caroline launched the Light Programme had Exhibition Choice, one of those occasional shows that used to come from either the Ideal Home Exhibition or the Radio Show, this one was hosted by John Ellison.


Mixing records and comedy clips at lunchtime was Jack Jackson’s Record Roundabout and in between the sport Three’s Company with the Polka Dots and The Searchers.  There was pop of the European variety at 6.30 p.m. as Katie Boyle hosted Pop Over Europe.


Meanwhile on Easter Sunday there’ll no doubt have been a handful of current tunes amongst the record requests on the most listened to show on radio at that time, Two-Way Family Favourites, which regularly pulled in 18 million listeners.


The only guaranteed 100% pop record show was Pick of the Pops with Fluff, back then running at just an hour between 4 and 5 p.m. , with that week’s chart seeing Can’t Buy Me Love entering at number one.  And that was it as far as the weekend was concerned. During the week how about Parade of the Pops (Bob Miller and the Millermen with guests Craig Douglas and Jan Burnette) or The Joe Loss Pop Show (with vocals from Ross McManus and guests Billy J Kramer and the Dakotas).  Other than that you could take pot luck on Housewives’ Choice or Twelve O’Clock Spin.


Later in 1964 came Pop Inn, followed in 1965 by Newly Pressed and Swing Into Summer which became the daily 1-hour plus Swingalong in Autumn 1966. By then even the Radio Times was minded to publish a Q&A asking “why no continuous pop?” The answer: “Because nearly all of it is on records. The BBC has to buy the right to broadcast them. It’s rationed to a fixed number of hours each week. That’s called ‘needle-time’. The BBC can’t buy any more.”  At the time the three networks had a total needle-time of 75 hours a week.  Concluding, just a little exasperatedly, the answer was “getting more needle-time isn’t something the BBC can decide by itself. A lot of other people have a say in it. In fact the other people have the last word.”


In 2009 Johnnie Walker recreated the sounds of the pirate era (though the pretence of broadcasting from onboard ship wore thin after a time) on Radio 2’s Pirate Johnnie Walker series.  In this first clip the guest DJ is Emperor Rosko.

Working on both Caroline and London was Ed Stewart.

On both the South and North ships was Dave Lee Travis.

From the final programme from 27 December 2009 is Dave Cash who joined Radio London within days of its launch in December 1964. There’s also a tribute to Mike Ahern who died a couple of months earlier.


This series is currently getting overnight repeats on BBC 6 Music.


From 19 April the Radio Ship will be playing out old pirate radio programmes:
http://www.theradioship.net/

BBC Radio 2 has a 2-part documentary about the offshore pirates that airs next month (I don’t have full details at the time of writing).


On Easter Monday BBC Radio Norfolk has a full day of celebrations and are wheeling out DJs that were associated with the pirate stations: Ray Clark, Andy Archer, Tom Edwards, Keith Skues and Colin Berry.


Meanwhile there’s plenty to read, and hear, about the pirate radio days on The Pirate Radio Hallof Fame and Radio London websites

Sources:
Radio Times 28 March 1964 and 8 October 1966
Pop Went the Pirates II by Keith Skues (Lambs’Meadow Publications 2009)
Radio Caroline: The True Story of the Boat that Rocked by Ray Clark (The History Press 2014)
With thanks to Robin Carmody for helping me track down a copy of the 1964 Radio Times

The BBC have now published details about the 2-part Radio 2 documentary titled 'They Didn't Fade Away-50 Years of the Pirates'. The first edition airs on Easter Monday: http://www.bbc.co.uk/mediacentre/proginfo/2014/16/r2-50-years-of-pirates-monday.html

There's a massive archive of pirate radio recordings rescued by home-tapers at:

Many shows have been reconstructed using vinyls with the original dj links. John Peel's shows were the most difficult because he show-cased many obscure bands and their vinyls are now long gone.

Thanks for the links Chris. Yes I agree Azanorak is a valuable resource. I've contributed a couple of recordings myself via the Radio Caroline Yahoo group.

Hi Andy. Is it ok to publish some of the photos on my Facebook group Pirate Rulers of The Airwaves please?

No problem Andy although I can't claim any copyright over them anyway. In fact I'm not sure where the two pirate radio illustrations came from.