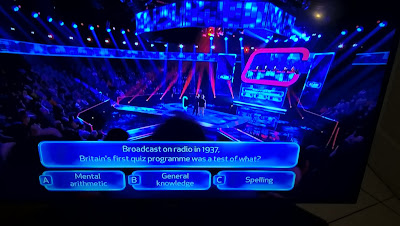 So the question was: Broadcast on radio in 1937, Britain's first quiz programme was a test of what? (a) Mental arithmetic (b) General knowledge or (c) Spelling? This was the question posed to a contestant on last night's Beat the Chasers (ITV). And the answer...

UK radio's first on-air contests were write-in affairs. The first was The Query Programme aired on 2LO on 7 May 1924. Unbilled artistes had to be listed in correct Radio Times billing, the three listeners with the closest entries being invited to the studio at Savoy Hill for the evening. Subsequent programmes, there were seven in all, generously offered five guineas to the most successful entrant and runners-up prizes of three guineas and one guinea.

Another write-in competition was Puzzle Corner ("Hello Puzzlers") which became a feature of the show Monday Night at Seven (and later Monday Night at Eight) that had started in 1937. The show featured a number of elements such as music, comedy sketches and a short drama, Inspector Hornleigh Investigates being the best known, and, from January 1938, Puzzle Corner. With general knowledge questions, anagrams and a musical medley it proved immensely popular and ran until 1949, by which time it was part of The Family Hour. It got a TV spin-off in 1950 as part of Kaleidoscope and then as a stand-alone show (1953-55). 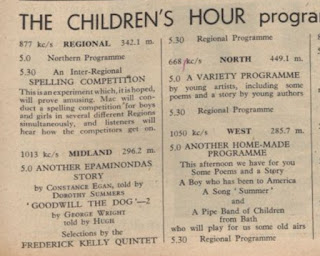 But the first quiz game to be battled out on air in real time, and the subject of that Beat the Chasers question, was a Spelling Bee broadcast as part of Children's Hour on Thursday 25 November 1937. Billed as An Inter-Regional Spelling Competition the Radio Times tells us that "this is an experiment which, it is hoped, will prove amusing. Mac (Derek McCulloch aka Uncle Mac) will conduct a spelling competition for boys and girls in several different regions simultaneously, and listeners will hear how the competitors got on".

The idea obviously caught on and in January 1938 the BBC entered into a co-production with NBC in the States for an adult version called Transatlantic Spelling Bee. Teams from Harvard & Radcliffe College played Oxford University with question-masters Tommy Woodrooffe (UK) and Pail Wing (US) overseeing proceedings. The US team won by 28 points to 24. The cameras of Pathé News were there to record the event.

A further transatlantic version was held in March followed by further UK-only inter-city competitions chaired by Freddie Grisewood, some dialect versions ("none of the words will be found in the Oxford dictionary") and even a TV version on the pre-war BBC service.

The idea on was revived on BBC radio during the war under the chairmanship of Ronnie Waldman pitting together teams such as Actors v Actresses or GIs v Tommies, and post-war with Lionel Gamlin being the most regular 'spelling-master'. UK broadcast spelling bees fizzled out in the early 50s but they remain popular in the US with the National Spelling Bee running since 1925 with TV coverage for the last 20-odd years on ESPN.