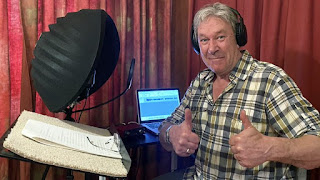 Disaster in Ambridge. No, so far the Borsetshire village remains COVID-19 free. But as a result of the pandemic the stock of recordings of the Radio 4 serial have run dry. New episodes are currently being recorded but with a difference as some of the actors record their lines at home (Tim Bentinck, who plays David Archer pictured above). According to The Archers website "Storylines will continue and you will still hear about the comings and goings in Ambridge, but you will hear its residents as you have never heard them before. Instead of multiple characters interacting each episode will have fewer characters and you will have an insight into more of their private thoughts".

These new episodes air from 25 May so to fill a three week gap this month we'll hear a selection of 'classic' episodes from the last twenty years. But while the programme takes a furlough, and for those with a longer memory, here's a chance to go back into the last century.

I've previously written about the night that Grace Archer died in 1955 and the passing of Doris Archer in October 1980. From just three months earlier comes this omnibus edition. The omnibus versions had started in January 1952 on Saturday evenings but moved to Sunday mornings in the summer of 1955. For 30 years they were introduced by Tom Forrest (played by Bob Arnold) who would directly address the listener and regale them with a countryside story and segue into the opening scene. This edition was heard on 24 August 1980 just days after the death of actor Norman Shelley who played Colonel Danby.


Moving on a few months the programme marked its 30th anniversary with this New Year's Day edition from 1981 as a party is about the start at Brookfield Farm.


The day before that 30th anniversary edition radio critic Gillian Reynolds explored the popularity of the serial in this edition of the Radio 4 arts magazine Kaleidoscope titled An Everyday Story.


In this omnibus edition from 14 February 1982 there's havoc on the roads of Ambridge - though it takes place 'off mic' - with the death of (spoiler alert) Polly Perks.


From August 1983 Jack Woolley (played by the late Arnold Peters) is hit by the news that his former wife Valerie (they'd divorced in 1974) has just died.


This is a bit of a rarity called Vintage Archers from Christmas Day 1986 as various characters get together over the holiday period and remember times past leading to the replay of some old clips including a reappearance of Grace Archer.

From 1987 yet another programme celebrating the genesis of the The Archers. From the documentary strand The Saturday Feature Barry Norman looks behind the scenes of the programme that was originally introduced as a farming version of Dick Barton. An Everyday Story of Country Folk was first heard on 27 June 1987.


The following day the special edition features Terry Wogan who's staying at Grey Gables whilst taking part in a pro-celebrity golf tournament. He's greeted by Pru Forrest, played by Judi Dench, a character who was seemingly silent in the 70s and 80s though she'd previously been played by Mary Dalley After this episode Pru once again lost her tongue.


Roland White looks at the programme's history for that week's Radio Times. 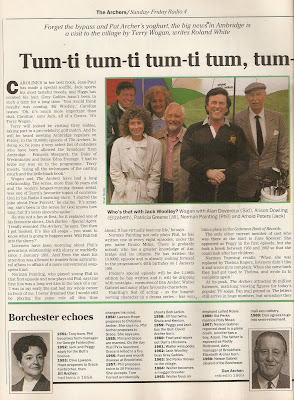 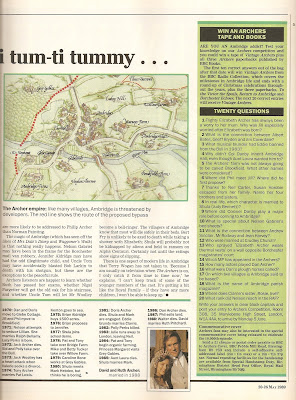 
In this Radio Times article from the same week Alison Graham asks whether the serial has come too far away from its roots as "an everyday story of country folk". 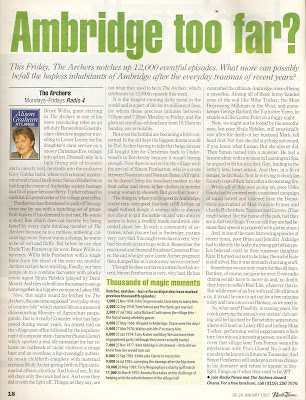 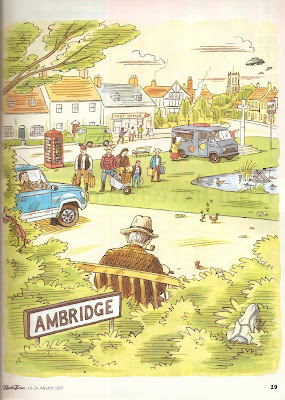 
From December 2000 is this edition of The Archive Hour in which Simon Hoggart looks at the how the development of the characters and storylines has adapted to reflect changing social roles and attitudes.

Finally some fun from 2001 when the Dead Ringers team pay an affectionate tribute to the show on its 50th anniversary. Starring Jon Culshaw, Jan Ravens, Mark Perry and Kevin Connelly this edition first aired on 1 January 2001.

Great to revisit the old days, but I must correct one glaring error, for the sake of the actor concerned! Pru Forrest was not always silent - she was played for many years by Mary Dalley, before falling silent in the 70s. It was frankly a bit of an insult to get a celeb in to voice her for the "only" time she spoke.

Thank you for your comment. I'm happy to correct this post and recognise Mary's role as Pru.

Thank you for curating this. I’m definitely going to savor it! :)