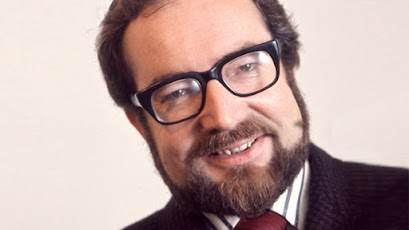 John  Tydeman, who joined the BBC in 1959, was a drama producer for the best part of four decades, becoming the department's head before retiring in 1994 and continuing as an independent producer.

Early assignments for Tydeman included the usual run of Afternoon Theatre productions and even the daily serial The Dales. Under incoming head of drama Martin Esslin (replacing Val Gielgud) he worked with upcoming writers such as Joe Orton and Tom Stoppard. He directed Orton's The Ruffian on the Stair for the Third Programme in 1964 (available here). Tydeman was shown the script for Orton's stage play Entertaining Mr Sloane and passed it on to agent Peggy Ramsey and it soon became a West End hit. Tydeman said: "I would always encourage them to write for the theatre-rather than TV, which seemed to do them less good on the whole".

For Stoppard he directed the short play M is for Moon Among Other Things (a 1990 remake is here) and If You're Glad I'll Be Frank.  Later there was Where Are They Now?, Artist Descending a Staircase, Rosencrantz and Guildenstern are Dead, The Dog It Was That Died, the award-winning In the Native State and The Invention of Love.  In the Native State was repeated earlier this year with an introduction by Tom Stoppard. The cast includes Felicity Kendall (who'd first worked with Stoppard in 1981 in On the Razzle and whose casting for this radio play bagged a rare Radio 3-related Radio Times cover), Saeed Jaffrey, and, in her final role, Dame Peggy Ashcroft. The piece is set in India in 1930 and London in 1990.

Tydeman was also closely associated with the works of Rhys Adrian, producing 27 of his plays including Passing Through, Buffet starring Richard Briers and Outpatient (available here).

In 1981 Tydeman was sent a script by a new writer called Sue Townsend about a character called Nigel Mole. The script was accepted and The Diary of Nigel Mole, Aged 13¾ was broadcast in January 1982. This directly led to a book commission, but with the diarist renamed Adrian Mole, and several volumes and subsequent radio adaptations followed with Tydeman himself making cameo appearances in the stories.

'Tydey', as he was known to colleagues, died earlier this year. Over the summer BBC Radio 4 Extra have been digging deep into the archive and have found two series that he directed that haven't been repeated in decades.  Just concluded is the 1970 Radio 2 thriller series The Joke About Hilary Spite. Written by Christopher Bidmead, later a script editor on Doctor Who, it tells the story of a young woman, a mesmerising performance from Angela Pleasance, who gets embroiled in the world of the secret service, computer hacking and double-cross. The cast includes Dinsdale Landen and three Tydeman cast regulars Andrew Sachs (this time playing an Italian coffee shop owner), Nigel Anthony and Rolf Lefebvre. 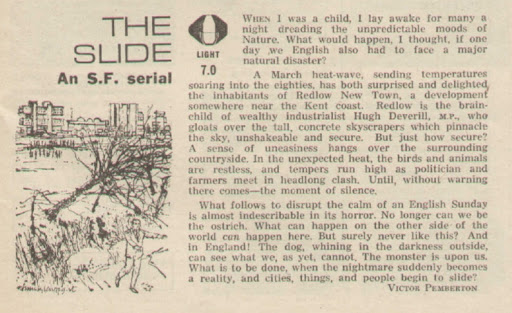 Coming up in mid-August is a 1966 sci-fi story by Victor Pemberton called The Slide involving the threat of a sinister mudslide on the New Town of Redlow. Pemberton had originally written it as a Doctor Who story but it was rejected; in time he'd would write for the TV show and become a script editor. David Spenser is in the cast as well as Maurice Denham, a very early role for  Miriam Margolyes and Roger Delgado (again providing another Doctor Who link as he played The Master in the 1970s). The series was released by BBC Audio in 2007 but this is it's first radio repeat.

Hi Andy, I noticed a blooper in episode 3 of "The Slide" - one of the professors mentions "H2SO4 and HC one" - rather than "H2SO4 and HCl" (i.e. hydrochloric acid). Mr Tideyman should have picked that up!