Sausages, A Lawn Mower and the Dwarf in Shakespeare 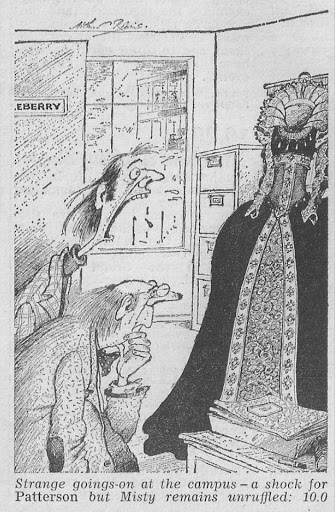 If I were asked to list my favourite radio comedies that list would include the largely-forgotten, and not heard since 1981, Radio 3 series set in the world of academe, Patterson.

Patterson (think Lucky Jim meets The History Man) was written by Malcolm Bradbury and Christopher Bigsby. It's Radio 3's only out and out sitcom, and that's more by chance than design. The series was originally commissioned for Radio 4 but at some point during its production they decided they didn't want it and Radio 3 controller Ian McIntrye picked it up. The series also enjoys the further distinction of being a the only Radio 3 series to get a repeat on Radio 2, and within months of its first transmission.

The central character is struggling English Literature lecturer Andrew Patterson, played by Lewis Fiander. His career is in the doldrums and so is his marriage to the long-suffering Jane, played by Judy Parfitt. In episode one he's interviewed for and obtains a job at some unspecified rundown Northern redbrick university. "Isn't that Henry Moore?" "Oh no sir, that's  Fred the cleaner  dusting a great hunk of metal".

During the interview we first meet two characters that will appear during the series, as well as two, Professor Amis and Professor Murdoch, that don't. The Vice-Chancellor is played in true CJ style (memories of The Fall and Rise of Reginald Perrin) by John Barron. "Hmm, Dr Patterson. In my experience, which is wide, women are not usually fellows called George". Richard Vernon puts in a superb comic performance as the absent-minded head of faculty Professor Misty. "Dreaming spires, appalling traffic, tea and crumpets, AJP wotsit."

Arriving for his new job Patterson finds his old friend from college Victor Evans (Hugh Thomas) is already in post. "I thought you were at Hull?" "I couldn't stand it, buses, people on the streets, living people walking about everywhere, giving me headaches..."

Victor introduces Patterson to the rest of the faculty: departmental secretary Mary played by Frances Jeator. "there's a letter for you already, an invitation from the Vice-Chancellor. Dinner next Monday night, 7 for 7.30, dinner jacket, RSVP, carriages at 11.30. I didn't like to open it". Then there's Amy Spade (Maggie Steed) prone to spying on her colleagues and then sending anonymous letters using newspaper clippings signed "the Holy Scout." And finally Melissa Murgatroyd "honeypot of the senior common room" vampishly played by Maureen Lipman - and showing just what a star cast Patterson enjoyed.

Other members of the cast during the eight episodes include Richard O' Callaghan the librarian on the issue desk Spencer Cuthbertson who comes round offering "bloody helpful herbs", university porter Probity played by Jack May (Nelson Gabriel from The Archers), Irene Prador as Mrs Vice-Chancellor ("Ach, to be Jung in Vienna"), Tariq Yunis as Victor Bannerji and Leueen Willoughby as Valerie Candle. Also appearing are Lisa Hayden, Philip Davis, David Tate, Patrick Barr and Patricia Hayes. 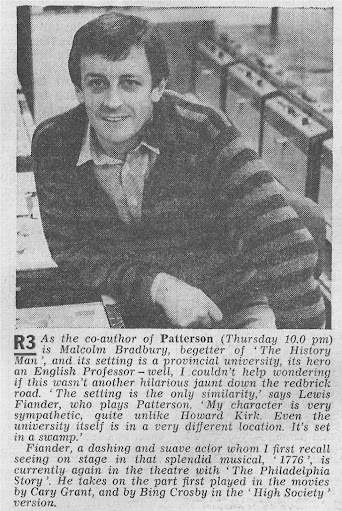 Patterson was produced by Geoffrey Perkins, at the time co-starring in and co-writing Radio Active but already an experienced producer with Week Ending, Hitch-Hikers and ISIHAC under his belt. When the series first aired on Radio 3 (February to April 1981) it, in true Radio 3 form, over-ran its supposed half-hour timeslot by two or three minutes. By the time of its Radio 2 repeat (June to August 1981) some of the dialogue had been trimmed but at the same time some musical stings had been added. Unfortunately the BBC only kept the edited repeats, though off-air recordings of the originals do exist. For years I'd wondered what the theme music was called and the answer came to just a couple of years ago when quite by chance I was listening to an old In Concert featuring guitarist Gordon Giltrap. The theme is Jester's Jig and both it and The Tyger were used to provide the stings between scenes for the revised repeats.

Here's an example of one of the edits between the Radio 3 original and the Radio 2 repeat. From the opening of episode one Patterson's monologue goes completely. Generally lines are cut rather than whole scenes going often in the longer domestic scenes with Patterson and Jane. I've left in the original Radio 2 continuity with announcer Liz Allen.

Malcolm Bradbury had written The History Man some five years before Patterson came along but surely the character of Flora Beniform, with whom Howard Kirk shares many "desultory interludes", is a forerunner of Melissa Murgatroyd. "Flora is formidable, and she likes going to bed with men who have troubled marriages; they have so much more to talk about, hot as they are from the intricate politics of families which are Flora's specialist field of study."

Bradbury co-wrote Patterson with his friend and University of East Anglia colleague Christopher Bigsby. In fact they had already collaborated on a 1975 Play for Today titled The After Dinner Game. It too was set on in a university and there amongst the dramatis personae are 'Flora Beniform' and an idealistic young lecturer called 'Andrew Patterson'.

The parallels between Patterson and the Kingsley Amis novel Lucky Jim can easily be found. The first major post-war campus-based novel, Lucky Jim is set in some non-descript university, perhaps inspired by Amis's own teaching experience in Swansea or maybe his visit to see Philip Larkin in Leicester. (The novel is dedicated to Larkin). Like Patterson, Jim Dixon, a young history lecturer, has to deal with an absent-minded professor, Professor Welch,  whose sentences just ...err... trail off... Welch, like Misty, addresses Dixon by his predecessor's name of Faulkner, just as Misty confuses Patterson as Thistleberry. There's a lecture for which each of the main protagonists is ill-prepared: Dixon's on 'Merrie England', Patterson's on Milton's Lycidas. Whilst Dixon sets fire to the bed sheets, Patterson manages to set his jacket alight. "This man is on fire. Pour champagne on him Probity." Dixon, a bachelor, spends most of the novel failing to get off with Christine and instead returns to the dull but dependable Margaret. Patterson, after various sexual dalliances, returns home to Jane and the kids.

I said "not heard since 1981" but that's about to change. My tapes of Patterson (since digitised) were beginning to wear out so I'm delighted to say that a new audience can finally appreciate this comedy when, after a 39-year wait, it gets a repeat next month on BBC Radio 4 Extra (weekly on Friday from the 4th).

You can read more about Radio 3's comedy output in my 2016 blog post The Intelligent Chuckle and in Tim Worthington's book The LarksAscending.

Rachel Cooke mentions Patterson in today's Observer! It's fair to say that she wouldn't list it as one of her favourite radio comedies, but finds it more interesting as a social document - https://www.theguardian.com/commentisfree/2020/sep/20/david-camerons-pheromones-are-the-least-of-sasha-swires-indiscretions