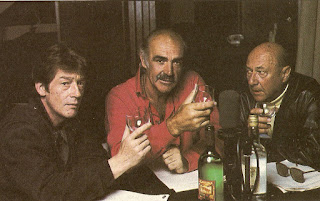 This weekend we're mourning the death of Sean Connery. Of course the plaudits and obits have all focused on his career defining 007 role but as this is a radio blog I've been looking elsewhere.

Connery's radio appearances were few and far between but inevitably focused on his films as well as his other passions of golf and Scottish nationalism. To my knowledge he only made one starring role in a radio programme and that was in a BBC Radio 3 drama series written by Peter Barnes.

Playwright and screenwriter Peter Barnes had adapted a number of plays for BBC radio by the time he wrote an original set of monologues that were broadcast in 1981. Barnes' People had a glitzy cast that included Alec Guinness, Leo McKern, John Gielgud and Peggy Ashcroft. Barnes' People II, a series of duologues appeared in 1984. Barnes' People III with casts of three was heard in 1986 and the final series More Barnes' People followed in 1990. Sadly they've not been heard since.

For the first drama of Barnes' People III,  called After the Funeral, director Ian Cotterell gathered together Sean Connery, Donald Pleasence and John Hurt. Connery flew in from Spain for the recording, Pleasence jetted in from France while Hurt "trotted along from Chiswick."

The black comedy centres on a trio of pimps - "upmarket flesh meddlers" - who are lamenting the passing of Anna "the First lady of Brotheldom." At the end they honour her memory by clinking glasses and singing Unforgettable.

The Radio Times had this article about the series written by David Gillard. 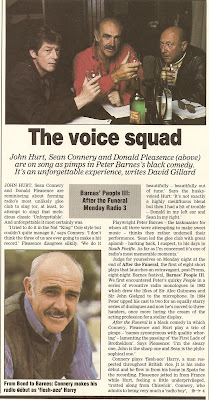 Here is that drama not heard since a 1987 repeat. (With apologies for the sound quality).

"Sadly they've been heard since."

But thank you for sharing your recording with us.

Or indeed "not been heard since". Thank you Billy. Written in a rush and not triple-checked.