You and Yours - A Brief History 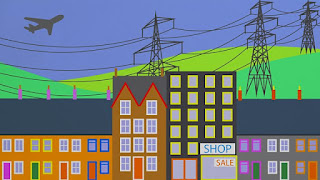 You and Yours has been championing the rights of the consumer and providing advice on matters of finance, legal issues, travel and holidays, food and drink, health, lifestyle, work, planning, money-saving tips and a myriad of other subjects for five decades. The programme's first edition aired on BBC Radio 4 on 5 October 1970.

In 1970 Radio 4 already had a smattering of programmes that dealt with a range of consumer issues (more on those in a moment). But the idea for some kind of umbrella programme was raised by the then controller Tony Whitby in May of that year following a departmental meeting about the "possible incorporation of the present service programmes in your department...into a daily magazine as 12 noon on weekdays."

Introducing You and Yours, Stephen Bonarjee, Editor of General Current Affairs wrote for that week's Radio Times: the logic is that, over the years, and over the pages of Radio Times, there have been scattered a number of valuable programmes dealing with listeners' various problems, on an ad hoc basis, never interrelated. All these aspects of direct concern will now be gathered together in one sequence."

The programme was initially scheduled in a 25 minute slot at 12 noon Monday to Thursday and just 15 minutes starting at 12.10pm on Fridays (to accommodate schools programmes). "We feel that this is a suitable time", said Bonarjee, "we hope one that is convenient for listeners. A high proportion of the matters discussed will be relevant to women, although not exclusively so. And women tend to be around at midday, to listen."

At first the programmes was broadly themed by day. Monday was money, Tuesday home and family, Wednesday rights and responsibilities, Thursday health and welfare and on Friday leisure.

You and Yours swallowed up four existing programmes. Perhaps the best-known and longest-running of these was Can I Help You? which dealt with legal, social and financial issues. It had started in October 1939 as  a series of fortnightly talks billed as "Questions that are puzzling people in these difficult times are answered by two well-known broadcasters". Those broadcasters were Herbert Hodge and Thomas Thompson. Hodge was (some four decades before Fred Housego) a cabdriver turned writer and broadcaster. Thompson had made his name writing about Lancashire life for The Guardian and the Radio Times and broadcasting for the North region. 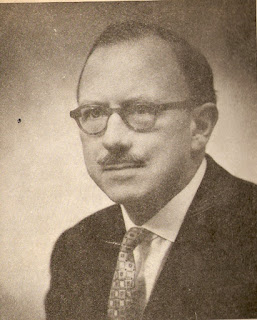 After a few months Douglas Hougton became the main name associated with the programme in which he dealt with "the questions people ask him and the problems arising from the many regulations with which we all have to deal nowadays." Initially on the Home Service and later the Light Programme Can I Help You? only really came into its own under Dudley Perkins (pictured above) who presented it throughout the 1950s. Perkins was a solicitor and at one time Assistant Director of the BBC's Legal Department. He also talked about legal matters on Woman's Hour and a You and the Law feature on the BBC tv afternoon magazine Home at One-Thirty (1961-2). Perkins received sufficient listener correspondence and interest in legal matters to publish a 1959 book Can I Help You? looking at topics such as buying or renting, hire purchase, sale of goods and making a will.

For most of the 1960s Can I Help You?, by now back on the Home Service (later Radio 4), adopted more of a magazine style rather than a straight talk. The main presenter was the staff announcer Robin Holmes and reporters included Marjory Todd, Joan Yorke (a long-time reporter on Woman's Hour), Pamela Deedes (solicitor and a regular contributor to Woman's Hour), Elizabeth Mitchell and Laurie Sapper(who became a leading Trade Unionist). All, except Marjory, would also appear on You and Yours.

Another programme subsumed into You and Yours was Listening Post which read out listeners correspondence on current issues. For most of its run it was scheduled to follow the 10 pm weekday news, only occupying a 12 noon weekly slot in the last few months of its run in 1970. it was variously presented by Kenneth Kendall, William Hardcastle, John Thompson, Douglas Brown, Leslie Smith, Audrey Russell, Walter James, Polly Elwes, John Ellison, Giles Playfair, Nan Winton, Anne Allen, Tim Matthews, Walter Taplin, Gilbert Phelps, John Anthony, Jill Tweedie and Antony Brown.

You and Yours also picked up some of the issues covered by Parents and Children "a forum in which parents can talk about their children." This had first appeared in late 1957 as part of the Study Session on Network Three, the daytime service on the Third Programme's wavelengths. Initially under the direction of Eileen Molony who throughout her career concentrated on programmes to do with education and child development ranging from Children's Hour in the 40s to BBC tv Schools programmes in the 60s. Parents and Children moved to the Home Service in 1964 and for much of its run was presented by former Talks producer and interviewer Leslie Smith who also appeared on Woman's Hour, Frankly Speaking, Taking Issue, Listening Post, In Touch, Home This Afternoon and many schools programmes.

Yet another programme that became part of You and Yours was  In Practice, a medical magazine with Joan Yorke that had started in April 1968 and by late 1968 was weekly on Thursdays at 12 noon.

And finally there was You and Your Money had a short run over the summer of 1970 and was presented by journalist and one-time ITN newscaster Antony Brown. 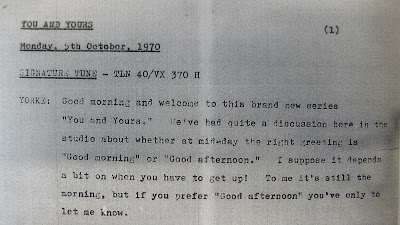 The first edition of You and Yours was presented by Joan Yorke. No recordings exist but it included items on home ownership, an interview with Lesley Vickers who'd just written the book Buying a House, and an interview with the Chairman of the Building Societies Association. Other topics in the first week covered DIY trends,  pensions for the over eighties, 'Pangs of Parting', 'Tomorrow's Living Rooms' and 'Firework Hazards'.

Despite some initial concerns that the programme would not have the time to deal with subjects in any depth or that it might provide inaccurate or misleading advice, it soon got support at the Radio Review Board. Controller Tony Whitby was happy that "the programme's practical, down-to-earth approach was exactly right. It deals with matters that are of daily concern to ordinary people". It clearly met the remit of providing a public service function.

There are very few early complete editions in the archives. From 7 June 1971 comes this edition presented by former World at One reporter Nancy Wise looking at household budgeting with Borehamwood housewife Mrs Jay and Tim Matthews on cheap holiday accommodation plus Ken Sykora reports on rheumatoid arthritis.

From 3 February 1972 an edition with John Edmunds, former ITV announcer and at the time a BBC tv newsreader. It includes a report from Joan Yorke on the growth of health centres and investigates school uniforms.

Joan Yorke is presenting this edition from 15 February 1972 looks at teacher's pay, the life of a fireman, textiles research and features an increasing number of listeners' letters.

Derek Cooper was already a familiar voice on radio and television when he presented You and Yours between 1970 and 1974. In this edition from 25 May 1972 he starts by tackling a subject which would later be close to his heart when he devised and presented The Food Programme in an interview with Dr Lyall Watson about his new book Omnivore: The Role of Food in Human Evolution. There's are also a report from Lucille Hall on a subject that remains critical today, that of elderly residential care and a feature on child development.

By 1980 the original theme had been dropped and we have one that sounds like a Radiophonic Workshop creation. In this short clip Nancy Wise (at the time the longest serving presenter) co-presents with Bill Breckon who'd been reporting on medical matters since 1973.

In this clip from 6 May 1983 Bill is presenting with ex-Radio Bristol's Jenni Mills. 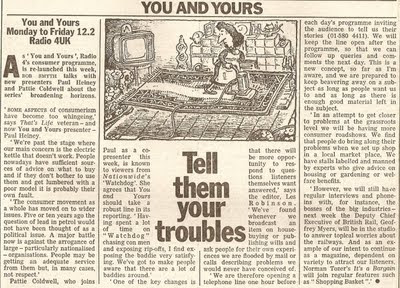 From 9 May 1983 the programme had a revamp with new presenters Paul Heiney and, from Nationwide's 'Watchdog' feature Pattie Coldwell. The other major change was that the programme no longer relied solely on listeners' letters to generate feedback but finally saw fit to open the phone lines "inviting the audience to tell us their stories", though it would be some years before callers were put on air in the regular programmes.

If you missed any vital information you could always send off for a fact sheet, at least until the internet came along. The You and Yours brand was also extended with programmes such as Call to Account and Call You and Yours.

For one of the 40th anniversary shows Julian Worricker looked at the changes in communications over the preceding four decades.

Since 2000 the You and Yours regular presenter has been Winifred Robinson alongside Peter White, who's been involved with the programme since the 1990s. It moved from Broadcasting House to Salford in 2011.


The influence of You and Yours and the expansion of consumer-based radio programmes continued throughout the decade and into the 1980s. These include the hard-hitting investigative Checkpoint with Roger Cook (1973-85), Money Box (1977- ), It's a Bargain with Norman Tozer (1977-84), The Food Programme (1979- ), looking at travel and transport Going Places (1977-98), radio's answer to the Holiday programme Breakaway (1979-98), Medicine Now with Geoff Watts (1980-98), Law In Action (1984- ) and exposing "serious cases of injustice, fraud, abuse of power and incompetence" Face the Facts (1986-2015). Consumer issues were also tackled on many a BBC local radio show and a revamp of Jimmy Young's show when it moved from Radio 1 to Radio 2 eventually saw the introduction of features with the Legal Beagle (Bill Thomas), Legal Eagle (Andrew Phillips) and Tony D'Angeli of The Grocer. On BBC Radio Ulster Linda McAuley has been presenting On Your Behalf for 25 years.

The 50th anniversary edition of You and Yours falls on Monday.