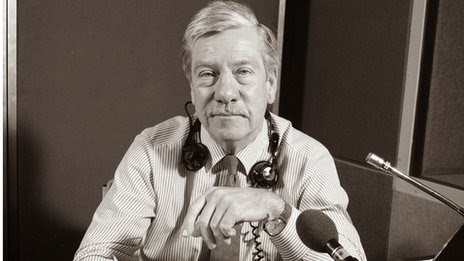 The first thing you notice is the voice, described by one writer as “rich as the finest burgundy”. That voice belonged to broadcaster and writer Derek Cooper who died on Friday.


Derek first started broadcasting in the 1950s on Radio Malaya, he ended up in the Far East following service in the Royal Navy. By the end of the decade he was controller of programmes for the English  Service (the ‘Blue Network’) but returned to the UK in 1960 when the station was relocated to Kuala Lumpur.
Joining ITN Derek would produce and sometimes narrate the Roving Report films, short travelogues from around the world. On YouTube checkout Roving Report: Project Malaysia narrated by Nigel Ryan and produced by Derek Cooper.


When, in January 1963, Granada started their World in Action series, again Derek was on narrating duties, along with Wilfrid Thomas. In 1965 he joined the BBC working on Tomorrow’s World. Raymond Baxter was the presenter but it was Derek’s voice you heard on the filmed reports about the latest technological advances.  This clip comes from a 1969 edition:


On the radio Derek was a regular reporter on the Today programme. It’s a report he did for Today that led to interest in all things food and drink. He talked to foreign visitors to the UK about their response to finding menus full of coq au vin and lasagne rather than traditional British fayre. Articles in The Listener and other publications prompted him to write The Bad Food Guide, published in 1967.


When the BBC Light Programme revamped their news coverage in 1967 and introduced the nightly News Time (from 2 January) Derek was the first presenter. He remained with the programme, alongside other presenters such as Corbet Woodall, when it transferred to Radio 2 and was on the final broadcast on 3 April 1970.


The following week over on Radio 4 the first edition of PM went out with the pairing of William Hardcastle and Derek Cooper.  Bill looked after the hard news and Derek the lighter stories, though he was only with the programme for a few months, being replaced by Steve Race. 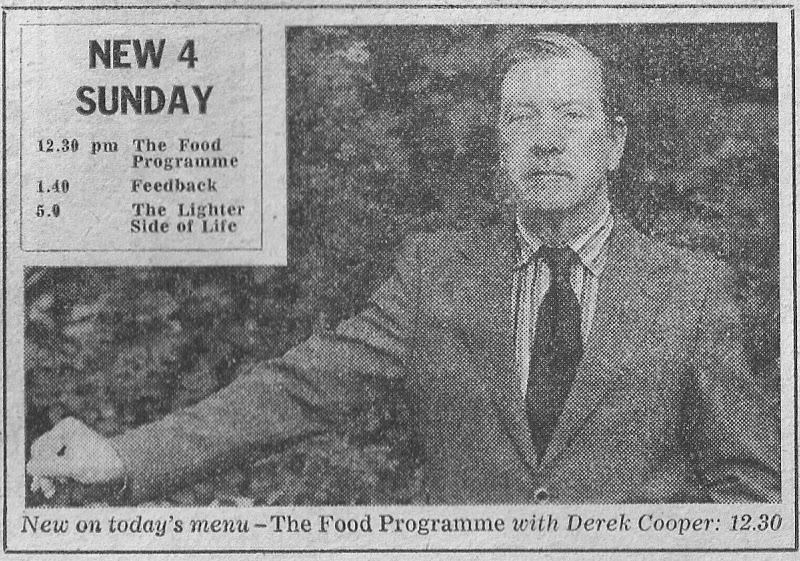 On Radio 4 in the 1970s there were an increasing number of consumer-based programmes: You and Yours (which Derek presented), Checkpoint, Money Box, Going Places and Breakaway. But there was little about the food and drink on national radio other Tony De Angeli (“editor of The Grocer”) on the JY Prog and Margaret Korving’s shopping basket items on You and Yours.  Derek had first proposed a TV series about the food industry in the early-70s but by the time the budget for the pilot had been agreed he and producer Richard Wade had moved on. In the interim Derek went on to present The Food Programme for BBC Scotland and A la Carte for Radio 4 before his original idea was eventually picked up by Radio 4 for the ground-breaking The Food Programme first aired on Sunday 30 September 1979.
This is a typical early edition from 1986 in which Derek looks at the coffee trade.

When The Food Programme hit the ten years milestone there was a special compilation edition broadcast on 11 September 1989.


Derek would make other programmes some such as STV’s Scotland’s Larder (all episodes are on YouTube) combining both his love of food and of Scotland – Derek was born in London but his mother was from the Western Isles, his father from Kent. For Radio 4 there was the 1989 series about the Western Isles, Islanders and in 1994 Cooper’s Particular Pleasures. For the BBC World Service in the late 80s he was one of the presenters of the arts programme Meridian.


He continued to write and broadcast about food but ‘retired’ from the microphone in 2002 – his last Food Programme was in September of that year. His campaigning work in raising standards in food production was recognised with an OBE, a Sony Award and awards that carried his name such as the BBC Food and Farming Derek Cooper Award and the Guild of Food Writers’ Derek Cooper Award for Campaigning and Investigative Food Writing or Broadcasting.
Derek Cooper 1925-2014

A glorious radio voice... from the days where vocal quality seemed to matter in making such appointments. Sadly, that seems to be a long-abandoned requirement!

PS: Lovely to hear a bit of Chris Rowe and Ian Clark in that last extract too!

Both the Guardian and Times obits say that during the 60s Derek presented programmes for BBC Schools. Anyone got any idea what these were?