Down Your Local – Roundabout East Anglia 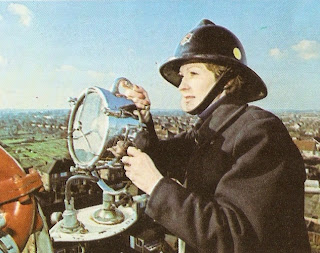 I start my review of the early BBC Local Radio stations by, ironically, focussing on an area that didn’t get a local station until 1980. It’s timed to coincide with a documentary going out this Bank Holiday Monday on Radio Norfolk titled Radio in a Roundabout Way.
By the early 1970s the BBC’s English regional opt-outs on Radio 4, and prior to that on the Home Service, were being phased out as the local radio network expanded. Regional identities remained in just East Anglia and the South-West.
The first regional opt-out from Norwich was a 35 minute show Happy Weekend, Everybody, billed as “Your songs, your music, whatever you’re up to”. The main presenter was Tom Edwards already well-known in the area as a former host on BBC1’s Look East as well, of course, as being a former pirate and Radio 1 DJ. However, the music mix of everything from “Semprini to rock ‘n’ roll” was not perhaps what the Radio 4 audience expected. The series ran from 1968 to early 1970 and alongside Tom the other host was former TV announcer Maggie Clews.
Launched in April 1970 was the region’s first news based magazine show, a half-hour opt-out from the Today programme called This is East Anglia. Again fronting this was Tom Edwards and, occasionally Jean Goodman who also presented Woman’s Hour from the region.
This is East Anglia


You may recognise that theme tune as the one first used by Breakfast Special on the Light Programme back in 1965, Jumping Jupiter by Ron Goodwin.
But, according to the BBC publication Serving Neighbourhood and Nation, “half-an-hour tended to be too short a time for the magazine to develop character and production staff felt this somewhat cramped their style”.
From 5 August 1974 the programme was extended to two hours (0645-0845) with a new title, Roundabout East Anglia. Broadcast on VHF only it provided the regional slant whilst Today continued on medium wave only.  For the first year Christopher Trace (of Blue Peter fame) was the anchor followed by Ellis Hill (pictured above on location with the Norfolk Fire Brigade) and then finally John Mountford, who would go on to work for Radio Norfolk. The mix of hard news and music in a magazine programme came to define the style of BBC local radio, all it lacked was the phone-in element.
John Mountford 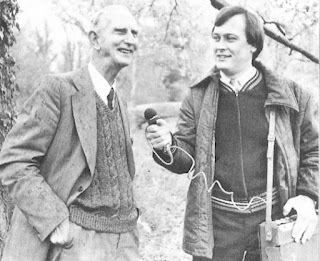 The VHF transmission area for Roundabout East Anglia spilled over into parts of Lincolnshire, Bedfordshire and Rutland attracting a regular audience of 300,000 listeners. Stories from this vast, mainly rural, tract of land were provided by eight freelance reporters working for senior producer Michael Chapman (pictured above with naturalist Ted Ellis) based at BBC East’s regional HQ at All Saint’s Green in Norwich.
You can hear interviews with many of the key players in the programme both on-air and behind the scenes in the Radio Norfolk documentary Radio in a Roundabout Way. Little archive material of the show existed apart from some tape inserts courtesy of reporter Stuart Jarrold but fortunately newsreader Michael Drake had kept his cassette copy of Roundabout’s Last Farewell when the programme ended on 30 May 1980. Four months later Radio Norfolk had launched.
With thanks to Paul Hayes.

Edit: the documentary has long since been unavailable on the iPlayer so here it is to enjoy all over again.
Posted by Andy Walmsley at 15:36