Down Your Local - The Switched-On Parish Pump 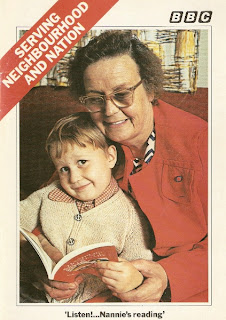 BBC local radio is under threat or at the very least faces a very tight squeeze. Programmes outside the core hours face the possibility of the chop or being shared amongst groups of stations. Some specialist music shows have already been dropped. Medium wave transmitters are being shut down and from January next year a new “Radio England” evening show has been commissioned to run across the whole network.

In this series of posts I’ll revisit the early days of BBC local radio and recall the programmes and personalities of the 1970s.

But first of all its back to the early 1960s when the plans for local radio were first mooted.  A BBC briefing document entitled Local Sound Broadcasting and dated 7 February 1961 detailed studies that had started two or three years earlier and outlined the pattern of local radio stations over the next few years.  “They would give a service of local news and local programmes. With the local stations and national networks together, we should be able to make sound broadcasting into a more comprehensive service more truly national than it has ever been.”

In the BBC’s 1977 publication Serving Neighbourhood and Nation Frank Gillard, former Managing Director of Radio and the man who played a key role in driving through the local radio ethos, remembered how it all began:


Radio began in Britain on a local basis. The early BBC built transmitters and studios in 20 cities. But the supply of wavelengths ran out. So a handful of high-powered regional stations, networking together, replaced the score of local outlets. The development of radio as a local amenity was abruptly interrupted.

That was 50 years ago. In the subsequent decades, broadcasting took hold in Britain very decisively, and showed its ability to make a powerful contribution to the enrichment of national life. To the metropolitan mind, that achievement was enough. But many in the BBC knew that its service was not comprehensive. It lacked one major dimension.

To serve national interests was a fine thing – but Britain is a country in which local life matters, too. For many people local interests and issues matter as much as national affairs.

Given its chance, broadcasting could stimulate and energise local life just as effectively as it had already contributed to the life of the nation at large. But when would the chance come?

By the mid-fifties, the post-war pattern of national and regional broadcasting was well consolidated. The time was ripe for an advance. Technical developments and particularly the opening up of vhf, made additional radio channels available.

Those who had the vision of what radio could do for home-town life began to preach their gospel. The BBC prepared a plan for local broadcasting and began to talk to the Post Office about it in 1958. Two years later, the Government put the idea, along with many others, to its Pilkington Committee on Broadcasting. Two years after that, in 1962, the Commons recommended the introduction of BBC Local Radio.

But this was one recommendation he Government would not swallow. It wanted to be convinced that there as public demand. How the public could be expected to demand something of which it had no concept, no model and no experience, was not explained.

So there followed years of campaigning – lobbying, demonstrations, lectures, discussion – until eventually local opinion up and down the land was so strongly mobilised that at Christmas 1966 the Government authorised a two-year BBC experiment with a handful of stations. The experiment had to be paid for by local money, and a number of local authorities made this possible.

The results were immediately convincing and within 18 months Whitehall authorised the BBC to expand the number of local stations to 20, and to support them form licence revenue.

It had been quite a struggle. But, at last, radio was firmly recognised and accepted as a community instrument of great value. For very large numbers of people in the cities where it exists, life without local radio is now unimaginable.

The sooner every community of any size in Britain can enjoy such a service, the better. And the richer the life of the nation as a whole will be.

This brief narrative somewhat underplays Gillard’s significant role in proceedings. As he mentions in the documentary posted below it was his personal intervention that got local radio back on the Pilkington agenda when he persuaded committee member J.S. Shields to reinstate the discussion.

Throughout the 60s a number of experimental trials around the country helped prove the concept and convince the decision makers. Although initially operating costs were funded in partnership with willing local authorities Gillard argued that the network of stations should be paid out of the licence fee at a time when the corporation was facing one of its regular financial squeezes. A review of operations culminating in the Broadcasting in the Seventies policy paper agreed that 40 stations would be opened; though, in the event, only 20 were on air during the seventies. It wasn’t until Radio Norfolk launched in 1980 that phase two came into effect.

Celebrating the first two decades of BBC Local Radio is this Radio 4 documentary The Switched-On Parish Pump. Presented by David Clayton and Neil Walker it was aired in March 1988.