Not the A to Z of Radio Comedy: K is for Keep It Maclean 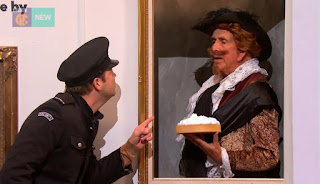 I see that Crackerjack (CRACKERJACK!!!) is back on television with Sam and Mark breathing life into the 60-odd year old brand. Amongst the faces popping up on the first show from its earlier incarnation was Don Maclean (pictured above).

During the 70s Maclean was partnered with Peter Glaze doing those Crackerjack comedy routines and song parodies as well as providing the comic relief on The Black and White Minstrel Show. By 1977 he was appearing on Radio 2, first on the comedy panel show Wit's End and then with his own sketch show Maclean Up Britain. Here he teamed up with one of his Crackerjack co-stars Jan Hunt, that man of voices Chris Emmett (Week Ending, The News Huddlines and The Burkiss Way), Bob Todd (stooge to Benny Hill and Spike Milligan on the Q series) and Gordon Clyde (the interviewer on The Dick Emery Show and presenter of The Pleasure's Yours on the World Service). 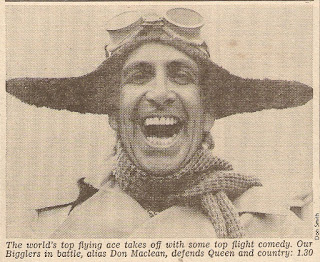 Don's show made a return in 1980 for a further three series but now re-titled Keep It Maclean. The cast, apart from Todd all returned with scripts provided by Tony Hare who had also written for Crackerjack and would go on to be one of the chief writers on The News Huddlines. The other writers were Howard Imber who'd contributed to Week Ending, TISWAS and Bullseye and later a comedy quiz vehicle for Maclean called The Clever Dick-athlon, as well as Jimmy Mulville and Rory McGrath just before they went off to write and perform on the telly.

From the start of the third series on 5 September 1982 comes this edition of Keep It Maclean. The comedy does, as those programme warnings on Talking Pictures TV sometimes say reflect "the prevailing attitudes of the time". Listen out though for a delightful musical tribute to radio stars of the past sung by Don to the tune of In Party Mood and with lyrics by Frankie Desmond.


Don Maclean continued to appear on Radio 2 comedy shows such as The Press Gang and The Name's the Game before taking over the Sunday morning religious slot Good Morning Sunday in 1990 where he was heard each week for the next 16 years.

Are You Sitting Comfortably? (Again) 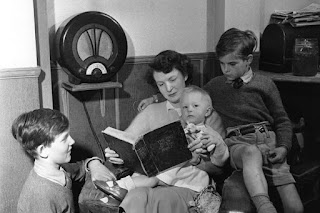 From the earliest days of British radio the BBC  was keen to keep the children of Britain entertained (and informed and educated too of course). Each of the regional stations had their version of Children's Hour presented by one of the radio uncles and aunts, from 'Uncle Rex' Palmer in London to Kathleen Garscadden as Auntie Cyclone (yes, really) in Glasgow. For ninepence a year those young listeners could join the Radio Circle and receive their membership card and enamelled badge.

Children's Hour was aimed at those of school age and it wasn't until 16 January 1950 that the Light Programme schedules listed, for the first time, Listen with Mother a new programme for the under-fives. The notion for such a programme was imported from Australian radio where the BBC's Controller of Talks, and former Director of School Broadcasting, Mary Somerville had heard Kindergarten of the Air, which had been running since 1942. 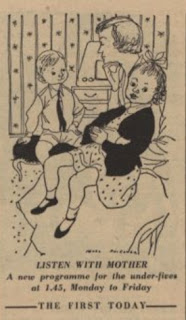 Broadcast on weekdays at 1.45 pm Listen with Mother was "primarily for the three- to five-year-olds" and consisted of "stories, songs and nursery rhymes and will be opened and rounded off with music". The nursery rhymes were set to music by Ann Driver, presenter of Music and Movement  since 1934 and sung by George Dixon and Eileen Browne, both schools programme producers and broadcasters. It was Eileen who became one of the main presenters of Listen with Mother for the next two decades.

The other main voice on the programme was that of the storyteller who initially would appear on a monthly rotation so that "continuity will grow through hearing a familiar friendly voice each day." Within the first few weeks the actresses Julia Lang and Daphne Oxenford both took turns as the "story lady", joined later by Dorothy Smith. All three stayed with the programme for years.

Those stories, whether it was Roderick, the Little Red Roller, Lambkin and the Butterfly or The Little Cat in the Haystack, were prefaced by the opening words "Are you sitting comfortably? Then I'll begin." Now synonymous with the programme and having long since entered the British consciousness they were supposedly ad-libbed by Julia Lang; but given this was the era when even live programmes were scripted, timed and rehearsed to the second this seems unlikely.

The other element was music, and it was soothing music designed to let the toddlers nod off whilst mother would put aside her housework and listen to Woman's Hour that followed. In time the soothing music became a regular closing theme, the rather wistful cradle song or Berceuse from the Dolly Suite by French composer Gabriel Fauré.

This recording dates from 16 June 1965 with Eileen Browne presenting, Julia Lang reading the story of Big Fat Puss-Cat. The continuity announcer is John Dunn. At the time the programme opened with an tune played on the celesta.


When Listen with Mother started the majority of children's programmes on the radio came within the remit of the BBC's Entertainment Division under the control of R.J.F. Howgill and later Michael Standing. However, Listen with Mother was produced by the School Broadcasting division under R.S. Postgate (seemingly no relation to Oliver Postgate) and then John Scupham. Following the axing of Children's Hour in 1964 Listen with Mother moved over from the Light to the Home Service (later Radio 4 ) where it remained for the rest of its run. In its new berth on the Home it was now followed by schools programmes in term-time or various musical concerts the rest of the year.

Increasingly competition from television meant that Listen with Mother sadly became an unwanted infant, more likely to be heard by 55-years olds rather than 5-year olds and eventually, and inevitably, got shunted around the schedules. In July 1973 it moved on an hour to 2.45 pm to follow Woman's Hour which itself had been shifted over from Radio 2.

When Radio 4 moved over to long wave in November 1978 Listen with Mother now went out at 11.45 am, an odd bit of scheduling just before lunchtime. By October 1979 it was back in the afternoon just after the 3.00 pm news and before Afternoon Theatre. Finally in September 1980 it was back again to mornings at 10.30 am and on VHF only, whilst the Daily Service was on long wave. Radio 4 controller Monica Sims, herself a former children's television executive, saw the programme as "a frightful nuisance" and that it "made the audience, or a lot of the audience, switch off".

Time was called on Listen with Mother in September 1982 and led to much "nostalgic wailing" with letters of protest and a petition handed in at 10 Downing Street, though it's doubtful that Mrs Thatcher was much of a fan. As a report in this sequence shows even Roy Hudd and Christopher Timothy were on hand to raise their objections and Chris Rowe - a song for every occasion - lamented its passing. These clips come from The World this Weekend and Today.

The final edition presented by Nerys Hughes and Tony Aitken was broadcast on Friday 10 September 1982 ending with a round of goodbyes from the recent presenters.


But Radio 4 didn't totally neglect the under-fives. The following Monday, 13 September 1982 again on VHF only, the five-minute Listening Corner started, offering just enough time for a story. It was a familiar voice too for that first week, that of Tony Aitken.


Listening Corner ran for eight years with stories read by some former Listen with Mother storytellers such as Nerys Hughes and Carole Boyd, some from Play School like Toni Arthur and Fred Harris and guest readers that included Roy Kinnear, Willie Rushton, Kenneth Williams and even Alvin Stardust.

The last edition of Listening Corner aired on Radio 4 on 24 August 1990, though by then it running on repeats. On Monday 27 August Radio 5 launched and scooped up all the children's and school's programmes with the toddlers catered for by Andrew Sachs on 1, 2, 3, 4, 5.