Not the A to Z of Radio Comedy: I is for Injury Time 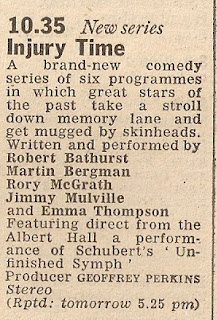 BBC radio has (or certainly had) a long association with the Cambridge Footlights, with the student drama club providing a rich source of on-air comedic talent and radio producers.

The cast of Injury Time were all Footlights alumni with three of them being past presidents: Jimmy Mulville in 1977, Martin Bergman in 1978 and Robert Bathurst in 1979.  The other two participants were Emma Thompson and Rory McGrath.

The sketch show Injury Time was one of the those Radio 4 shows that used to be dropped into the schedule to fill the summer recess when Week Ending was taking a holiday. Some lucky ones enjoyed more than one series - Injury Time was one such and ran over three years (1980-82).

To add to the show's comedic pedigree, and overseeing proceedings, was producer Geoffrey Perkins (Oxford University) and contributing to the scripts were Guy Jenkin, Jon Canter, Douglas Adams, Clive Anderson and Stephen Fry (all Cambridge University, with Canter being Footlights President in 1974 and Anderson in 1975). For the second (1981) and third series (1982) Martin Bergman was replaced by another Footlights graduate Griff Rhys Jones, who'd already served time as a producer on Week Ending and the scholastic quiz Top of the Form.

From 1 August 1980 comes my off-air recording of the first ever edition of Injury Time.  At the time this series seemed to offer something fresh but listening back it does play safe, certainly safer than The Burkiss Way which it name checks in the closing credits - even if there is a Burkiss-style jokey continuity announcement  at the end. It's nearest influence was probably Not the Nine O'Clock News and its perhaps no coincidence that Griff appeared in both.

Listen out for an impression of the now persona non-grata Clement Freud "one of the few Liberal MPs not to be accused of... (Buzz) Deviation" and a short sketch using the Play School theme voiced by Emma Thompson whose Dad was, of course, on the pre-school programme in the 60s. The Musicians Union sketch references the industrial action taken as a result of BBC cutbacks to its in-house orchestras (and the dropping of Waggoners' Walk). The gymkhana sketch has Emma in Joyce Grenfell mode and to prove we're on Radio 4 there's a longer piece that relies on the audience's knowledge of Kafka.

Mulville and McGrath went on to write and star in the Channel 4 sketch show Who Dares Wins and to found, with Denise O'Donoghue, the influential Hat Trick Productions company. Mulville continued to work mainly behind the scenes while McGrath tended to spend a lot of time on panel games. Bergman married US comedian Rita Rudner and has worked in Hollywood. Bathhurst appeared in the underrated Joking Apart and has spent years playing David Marsden in Cold Feet. As for Emma Thompson, she was never heard of again!


This is the first in an occasional series of posts, i.e. when I can be bothered and/or find the time in which I'll dart around the alphabet in no particular order and delve into my archive of old comedy shows. I'll be picking those shows that rarely, if ever, get a repeat on Radio 4 Extra.

Posted by Andy Walmsley at 13:00 No comments: