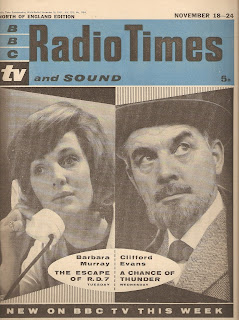 22 November 1961. Elvis is number in the UK hit parade with His Latest Flame. Jimmy Dean's Big Bad John tops the Billboard Hot 100. The Biblical epic King of Kings is the latest cinema release. Macmillan's government has implemented a wage freeze and is considering joining the Common Market. JFK is not yet a year into his Presidency and the date two years on would prove fateful. Meanwhile at Hull's Hedon Road Maternity Hospital I was born.

But this is a radio blog. So what, I hear you cry, was on the radio that day? The BBC Programme Index helps fill in the blanks but you can't beat going back to the Radio Times listings.

My edition of the Radio Times is for the north of England so on the Home Service we only get the first edition of Today with Jack de Manio. Replacing the second post 8 am news edition is Today from the North with John Watmaugh. It's term-time so schools programmes take a chunk out of the daytime hours. Wednesday means Choral Evensong and from 5 pm programmes badged as Junior Time in what was the old Children's Hour timeslot include a drama The Immovable Object produced by long-time Manchester-based producer Trevor Hill. From the current perspective the evening schedule seems a little odd, the Home Service carries the Bizet opera Carmen in four acts, so taking up most of the night. However, the Third Programme has the drama, in this case an adaptation of Un Caso Clinico (A Hospital Case) by Italian playwright Dino Buzzati. 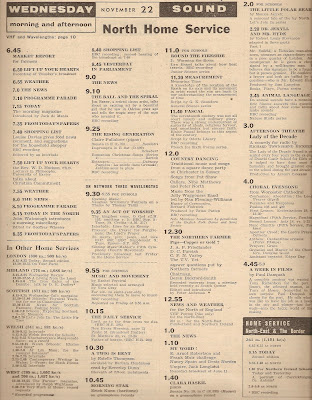 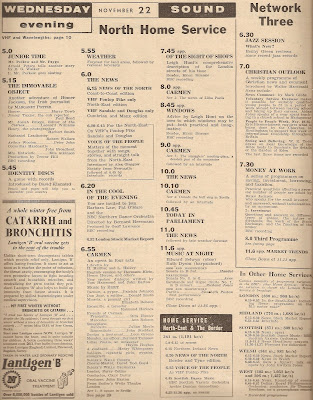 The Light Programme offerings include Housewives' Choice with Kenneth Wolstenholme who was in a for a busy day with tv commentary to follow in the afternoon. Radio commentary on the second half of the England v Ireland international was by Raymond Glendenning and Robert Rosser. Lunchtime music was provided by Bob Miller and the Millermen and guests in Parade of the Pops. We now know how this show sounded thanks to a chance discovery of a recording of the programme from 30 August 1961 in my earlier post Back in Time On the Light - Part 1. 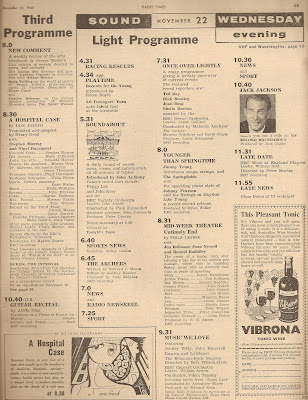 There are some very familiar titles in the afternoon and early evening including Listen with Mother, Woman's Hour (it would not be until 1973 that it moves to Radio 4), Mrs Dale's Diary and The Archers, as well as the teatime magazine show Roundabout. The evening on the Light moves from the long-forgotten comedy Once Over Lightly, Jimmy Young presenting Younger than Springtime, a Mid-Week Theatre story by Philip Levene who would later script some classic episodes of The Avengers, through to Jack Jackson's Record Roundabout and the BBC West of England Players who bookend this day with appearances on Morning Music and the pre-closedown Late Date.

Of course it wasn't just the BBC you could tune into to. There were any number of foreign stations, perhaps the AFN, but more than likely it'd be 208 metres for some alternative night time listening on Radio Luxembourg. The schedule for the 22nd can be found in the issue of Disc ("the top record and musical weekly") tracked down online by Mike Barraclough. Essentially its full of lots of very short  pre-recorded sponsored shows with not much clue, at least in this publication, as to who the DJs were

Meanwhile over on the telly ITV offered us Zoo Time from Whipsnade Zoo, The Adventures of Sir Lancelot, Coronation Street (so some things never change), Rawhide, the musical programme Pop! Vintage '48 and The Blackwell Story,  a drama about America's first woman medical student Elizabeth Blackwell. Over on the BBC it was an afternoon of live football with Kenneth Wolstenholme commentating of the England v Ireland international, The Flowerpot Men, Tales of the Riverbank, Cliff and the team with Tonight, the US series Frontier Circus, Peter Dimmock with Sportsview and the start of a new 6-part drama A Chance of Thunder by Z Cars scriptwriter John Hopkins. 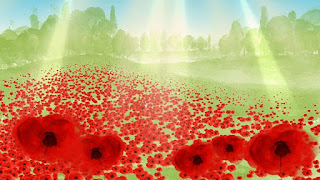 Today marks Remembrance Sunday, the day to commemorate those who gave service during the two world wars and later conflicts. Marking this day on the Sunday after Armistice Day has been part of British life since 1946.

Armistice Day services were first held in 1920 and a year later the Royal British Legion began selling poppies. Early BBC programmes did mark Armistice Day each November 11th but it wasn’t until 1928 that it was allowed to broadcast coverage of the events at the Cenotaph in London, including the two minutes silence.  An agreement was made with the Home Office when the BBC assured that it could be done by use of underground cables to minimise the risk of “unsightly mechanical apparatus” except for “one microphone which might take the form of a lectern”.  Thus started a broadcasting tradition that means that this is one of the longest-running outside broadcasts on UK radio.


The Armistice Day coverage continued until 1938, with the 1937 and 1938 ceremonies also filmed by BBC television for broadcast later that day.  It resumed after the Second World War on Sunday 11 November 1945 but the following year the Government decided to mark the event on the second Sunday of November on what was to be called Remembrance Sunday. Setting the scene for that 1946 service at the Cenotaph was Wynford Vaughan-Thomas. Subsequent Services of Remembrance were carried each year on both the Home Service and the Light Programme with commentary alternating between Vaughan-Thomas and Richard Dimbleby. By 1962 Robert Hudson took over the radio commentaries with Dimbleby (and following his death, Tom Fleming) taking over the BBC television presentation.
Hudson would describe the role of commentator for the event as "having a pastoral role to play; his words, dropping precisely into place, must strike exactly the right note. The mental image of the scene and the personal recollections prompted by his words can often be more vivid and satisfying than any television picture, however skillfully composed."

This brings us to Sunday 13 November 1960 when this recording of the Service of Remembrance was made. The announcer (Frank Phillips?) introduces the programme before going over to “our observer overlooking the scene in Whitehall”. That observer is once again Wynford Vaughan-Thomas. This is another recording made by Eric Bartington and digitised by Gerard de Roo, to whom I extend my thanks.

Since this recording the radio commentary for the Service of Remembrance from the Cenotaph has been provided by the following: