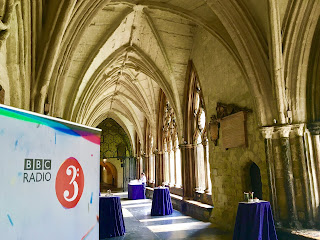 Next week one of BBC radio's longest-running programmes will mark its 90th year on air. Choral Evensong was first heard on 2LO on Thursday 7 October 1926 billed (see below) simply as '3.0-3.45 Evensong relayed from Westminster Abbey'. Today at 3.30 pm on Radio 3 the programme makes a return to Westminster Abbey. 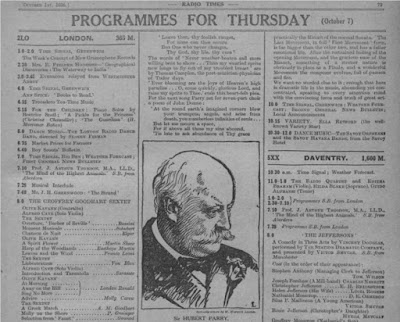 Choral Evensong (it was mostly billed as just Evensong until 1945) has been broadcast on various days of the week since 1926 on the National Programme, Home Service, Radio 4 and then, from July 1981, on Radio 3. 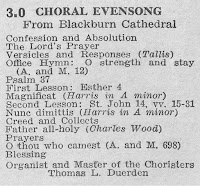 There's a large archive, approaching one hundred, of Choral Evensong recordings on the YouTube channel of the Archive of Recorded Church Music. The earliest surviving recording, taken from BBC Transcription Service discs, dates from 7 September 1948 (Radio Times billing shown above)

Note: the BBC describes Choral Evensong as "the longest running outside broadcast" programme. In terms of programme duration it's only beaten by The Week's Good Cause which started in January 1926, though that's been known as Radio 4 Appeal since April 1998.
Posted by Andy Walmsley at 12:00