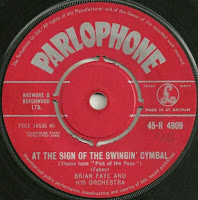 It's one of British radio's best known signature tunes. It has accompanied countless chart rundowns. It is forever associated with one DJ but remains part of the fabric of radio some 14 years after his death. It's At the Sign of the Swinging Cymbals and it's 60 years old this year.

So how did this piece of orchestral music become such an iconic track?

It was composer and arranger Brian Fahey that wrote At the Sign of the Swingin' Cymbals (its original title) in 1960. It was released on the Parlophone record label (catalogue number 45R-4686) The title, if not the tune, was inspired, if that's the right word in this instance, by a crude song that he probably heard sung in the Forces that starts with the line "on the street of a thousand arseholes". This in turn was based on a dramatic monologue written and performed in the mid-30s by music-hall comedian Billy Bennett called The Street of a Thousand Lanterns (I'll not repeat the words to that here).

Towards the end of 1960 it was BBC Light Programme producer Derek Chinnery who was tasked with producing a new show for the upcoming DJ from Australia, one Alan Freeman. Freeman had already been given a weekly try-out on the daily disc show Twelve O'Clock Spin and in January 1961 was to get his own weekly show Records Around Five, sandwiched between Mrs Dale's Diary and Roundabout. Chinnery thought that the recently issued record by Brian Fahey and his Orchestra was appropriate as a theme and Alan liked it too. And so it was first used as Fluff's theme on 5 January 1961 for a show that had a 14-week run. 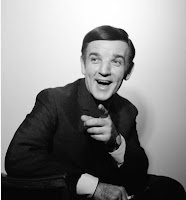 In September 1961 Alan took over the role as presenter of the Saturday night best-selling record countdown Pick of the Pops from David Jacobs. Initially part of a longer show Trad Tavern it became a stand-alone Sunday afternoon fixture from 7 January 1962. It was Alan that suggested to producer Denys Jones that there were sections of At the Sign of the Swingin' Cymbals that he could use to punctuate the various sections of the show and so started its long-running association with a chart rundown.

So popular was the new theme that Parlophone re-issued it in 1962 (catalogue number 45R-4909) labelled as the theme tune to Pick of the Pops under the title At the Sign of the Swingin' Cymbal and credited to Brian Faye (sic) and his Orchestra.

The theme was dropped in late 1966 in favour of Quite Beside the Point (a composition by Cliff Adams, he of Sing Something Simple fame)  and credited as being played by the Harry Roberts Sound.

By 1970 At the Sign of the Swinging Cymbal was back in a brand new souped-up faster brass-led arrangement by singer, composer and arranger Barbara Moore, the version that's still played to this day. It was recorded in a session that saw the group of musicians, under the name of Brass Incorporated, also playing the Moore composition for Terry Wogan's Radio 1 afternoon show called Just Like That. Both were released on a Pye International single (catalogue number 7N.25520).

Of course those cymbals are still swinging as the theme has remained with Radio 2's weekly Pick of the Pops since 2000 with Dale Winton, Tony Blackburn and Paul Gambaccini.

Here in audio form is the story of At the Sign of the Swinging Cymbal and Pick of the Pops with the voices of Alan's first BBC producer Derek Chinnery, his first POTP producer Denys Jones, Fluff himself talking to Steve Wright in 1997 and Barbara Moore in conversation with Tony Currie in 2014.

Though the Brian Fahey version was dropped in 1966 it has continued to appear on radio and TV and in 1975, by which time Brian was the conductor of the BBC Scottish Radio Orchestra, he got to conduct another performance of it. This comes from the Radio 2 show Saturday Night featuring the BBC Radio Orchestra, presented from London by Ray Moore, with the SRO up in Glasgow with an introduction from the guest singer that week, Danny Street.

The tune re-surfaced on Radio 1 in 1998 when Fatboy Slim got his hands on the Fahey original and re-mixed it for the Top 40 rundown with Mark Goodier. A couple of months later yet another re-mix, this time by The Propellerheads and titled Crash! was used and lasted four years. Their version also featured in the soundtrack to the 1999 film Austin Powers: The Spy Who Shagged Me.

Brian Fahey was born in Margate in 1919 had been taught to play the piano and cello by his father. He joined the territorial Army in 1938 and was called up the following year where he joined the Royal Electrical and Mechanical Engineers. He was wounded and captured during the retreat to Dunkirk. He spent the next five years as a prisoner of war organising entertainment in the POW camps. His first job as a musician was as pianist with Rudi Starita's Band where he met his future wife Audrey Laurie who sang with the band. He arranged for Geraldo, Harry Roy, Billy Cotton, Joe Loss and Ken MacIntosh for whom he wrote The Creep (a chart hit in 1954). His 1955 composition for Eric Winstone's Band called Fanfare Boogie won him an Ivor Novello Award. 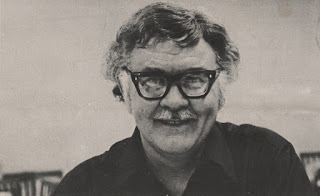 Other Fahey compositions that were used on BBC radio included Swinging Choice, the theme for the short-lived successor to Housewives' Choice on Radio 1 called Family Choice, Pete Murray's theme for Open House and the opening music for Late Night Extra.

Between 1972 and 1981 Brian was the conductor of the BBC Scottish Radio Orchestra until it was disbanded in a round of cost-cutting. By this time he was living in Skelmorlie in Ayrshire. His own orchestra continued to appear for a few years on Radio 2 shows such as You and the Night and the Music and the weekend Early Show and Late Show and later he guest conducted the BBC Radio Orchestra and the BBC Big Band.  He died in 2007.

For more about Barbara Moore see her website here and a page on the De Wolfe Music site. 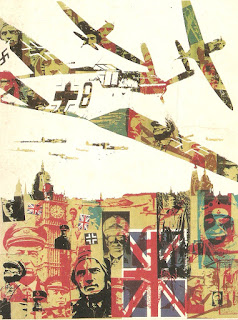 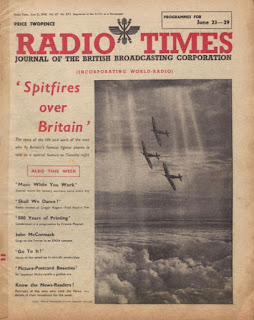 Posted by Andy Walmsley at 09:58 No comments: