The Voices of D-Day 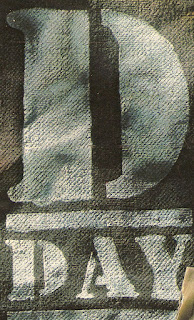 Operation Overlord had been months in the planning. A vast allied onslaught of men, machinery and armaments onto the beaches of Normandy that eventually got the go-ahead on D-Day Tuesday 6 June 1944. The official announcement on BBC radio came at 9.30 a.m. with the reading of Communiqué Number 1.

"This is London. London calling in the Home, Overseas and European services of the BBC
and through United Nations Radio Mediterranean, and this is John Snagge speaking.
Supreme Headquarters Allied Expeditionary Force have just issued Communiqué No. 1.
Under the command of General Eisenhower, Allied naval forces, supported by strong air forces, began landing Allied armies this morning on the northern
coast of France".

Facing something on an editorial dilemma the Corporation had already broken the news at 8 a.m. to forestall any rumours that may have started to circulate following an early morning announcement on German radio that had been recorded by the Monitoring Service in Caversham.

The logistical planning for Operation Overlord had started in early 1943 with a target set for the following May. By the end of the year SHAEF (the Supreme Headquarters Allied Expeditionary Force) had been established and General 'Ike' Eisenhower appointed as Supreme Commander.

The BBC was playing its part too and in May 1943 established the War Reporting Unit with the team of correspondents undertaking courses of physical training, reconnaissance, weapons training, signals, aeroplane and tank recognition and map-reading. Before D-Day they were deployed so that they could cover every phase of the landings. On the day itself the first eyewitness accounts from onboard a bomber were heard after the one o'clock news.

That evening saw the first edition of War Report which pulled together first-hand reports from the War Correspondents. The voice of John Snagge was heard again: "War Report number one, the story of D-Day. Throughout the day the British Broadcasting Corporation has been telling the world that allied forces have crossed the Channel into France. With every arm of the liberating forces went a BBC correspondent and soon after the assault was launched reports began to come in."

The following day, D-Day+1 a new radio service, the Allied Expeditionary Forces Programme, was launched by Franklin Engelmann complete with its famous Orange and Lemons theme.

Over the years BBC radio has regularly commemorated the events of that day, most notably for the 50th anniversary in 1994 when there was a whole bunch of extra programmes.

Some notables programmes over the years include:

The Story of D-Day (Home Service 6 June 1948)- an account of events produced by Laurence Gilliam of the BBC Features Department and written by former war correspondents Chester Wilmott and Robert Barr. This retelling contained no actuality and accounts were read by actors.
Five Years After (Home Service 5 June 1949) -memories from the war correspondents who reported at the time including Richard Dimbleby, Stanley Maxted and Colin Wills.
This Was D-Day (Light Programme 7 June 1953) - "A sound-picture ... compiled entirely from on-the-spot recordings made by War Correspondents and men of the Allied Forces"
D-Day Anniversary Programme (Light Programme, 6 June 1954) - a number of programmes throughout the day to mark the 10th anniversary
Dawn of D-Day (Home Service 14 June 1959) with Lt-General Brain Horrocks narrating
OK! Let 'Er Rip (Radio 4 4 June 1974) - taking its title from the supposed invasion order given by Eisenhower
D-Day: 6 June 1944 (Radio 4 6 June 1984) - see below
Overlord  (Radio 4 18 & 25 May 1994) - Christopher Cook tells the story of the military and diplomatic preparations
D-Day A Moment in History (Radio2 6 June 1994) - a collection of eye-witness accounts from British, allied and German ex-service personnel.
The People's D-Day (Radio 4 5 June 2004) - a two-hour sequence, presented by Libby Purves, of "short features and stories told by the people who made D-Day happen".
From Dunkirk to D-Day (Radio 4 5 June 2004) - Charles Wheeler recalls "the epic of survival and strategic success that made cross-Channel victory possible". 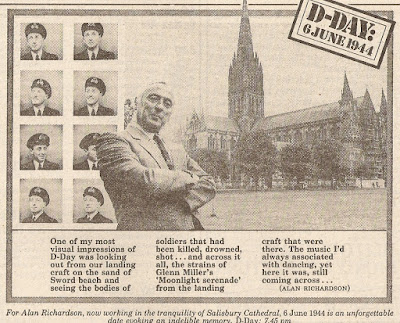 The finest of these commemorative programmes must be the 1984 documentary, D-Day:6 June 1944,  compiled and written by Alan Haydock and Dan Kelleher. It relies almost entirely on the voices of the men and women that were involved in the planning, logistics and invasion of the Normandy beaches, all recorded especially for the programme. They tell their story in a matter of fact way, and is all the more powerful for it.  There's minimal narration, in this case from actor Frank Windsor (of Z Cars fame) and only a little archive material with reports from Frank Gillard, Richard Dimbleby, Chester Wilmot and Colin Wills.