A year ago a poster on the R2OK forum asked whether anyone had any recollections about David Symonds. The post below is based on my response to that query supplemented with additional research and audio.

David was born in Oxford in 1943. At university he read botany for a year but left and headed off for New Zealand where he got his first radio job working for the New Zealand Broadcasting Corporation.

He returned to the UK in 1965 and joined the BBC as a staff announcer working across all the networks. For the first 18 months he mainly read the news on the Home Service and presented classical programmes on the Third Programme. But he ‘swapped’ with David Dunhill and joined the Light Programme taking turns on Playtime, Newly Pressed and Breakfast Special. His break came when he took over from Keith Fordyce on the Sunday morning pop show Easy Beat. 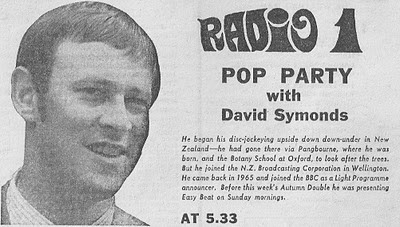 
In January 1969 he lost his daily show to Tony Brandon and moved to Sunday mornings, back in his old Easy Beat slot, where he was billed as ‘Uncle David Symonds’. Symonds on Sunday ran until September 1969 when DLT took over. During this period David was also one of the DJs on Radio One Club and during February he covered for Tony Blackburn on the Breakfast Show.

From April to October 1970 he presented the Monday editions of Sounds of the Seventies, before leaving the station. He spent time in recording studios learning about production and for a while managed the bands The Purple Gang and Fairfield Parlour. Back in radio by 1973 David was a production manager for Radio Luxembourg.

Writing in The Independent in 1992 he explained the possible reason his demotion from his Radio 1 weekday show: "In 1969 I was the first (and, as far as I know the only) Radio 1 DJ to be busted. I had left my overnight bag in a Doncaster hotel while on assignment for Radio 1 Club. An over-zealous manager called in the police when he found a small amount of grass in the bag. Douglas Muggeridge, who by then had replaced Robin Scott as controller, assured me that no stigma would attach to my BBC career. Perhaps it was coincidence, then, that the latter became downwardly mobile from that moment on, and I left Radio 1 altogether in 1971".

David’s voice was the first DJ on air when Capital Radio launched in October 1973.
 


A couple of years later he was chosen as the first Programme Controller for Radio Victory in Portsmouth. He was at Victory for a year or so. This aircheck dates from 22 June 1976.


By 1978 he was back at the Beeb as a Radio 4 announcer. He did many of the promotions for Radio 4 UK in advance of the move to 1500m in the November. His was the first voice to welcome listeners to Radio 4 on long wave. His stint here lasted from October 1978 to August 1979. 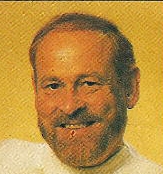 In July 1979 David was again had an afternoon music show this time on Radio 2 presenting  Much More Music, a programme of easy listening. This started on 9 July 1979 and ran through until 1981. These clips date from 1979 and 1980.


Then it was off to California to live out “the lost dream of sun, sea and rock 'n' roll” presenting the morning show on station KEZY in Los Angeles.
Back in the UK by 1985 David was again on Radio 4 as an announcer and newsreader. Here he is on 3 July 1986 with news of the Peacock Committee report on broadcasting.

By all accounts David “hated” his time on Radio 4 and so jumped at the chance to return to pop music presenting on Capital Gold from 1988 until about 1993.

Dreams of broadcasting from somewhat sunnier climes were realised when David moved to Cyprus in about 1995. There he set up radio station Coast FM in Limassol as well as running Rondor Creative Services Ltd. Saying that “it was everything I’ve lived for since I was a boy” the station ran for about 10 years. But the recession hit and earlier this year David sold the company to new Russian owners. Apparently his intention was to apply for a new radio licence for a station that is more “international” than “English”;

Do you have any recordings of David on either Radio 1 or Capital Gold? If so I'd love to hear from you.
Posted by Andy Walmsley at 02:00

Never knew David worked on the Third. Making him one of an elite band to have had a regular gig on Radios 1,2,3, and 4. Gambo is the other obvious example - Richard Baker managed 2,3 and 4... any other contenders?

Incidentally, while the mellow side of his delivery is showcased here, the Azanorak site has a Capital Countdown aircheck where he's super-energised, indeed possibly taking the p-ss out of the whole thing!

That Victory news fanfare owes a lot to Capital's of the same era, and I thank you for introducing me to that Henry Gross song!

No problem! Many announcers in the 60s worked across all the networks. John Dunn must be another contender from the days when Night Ride was classed as a Radio 1 programme. He hosted the Sports Service on the Third and 4th Dimension on Radio 4.

The Victory clip must be from towards his run as programme controller.I think he left and the end of Aug 76 (same time as Jack Mcgualhin).Calling was a kinda of local version of Down Your way and visted a town in the Victory transmission area each day. Introduced after the IBA complained that Victory wasn't providing a enough programmes that interacted with their community.

John Dunn presented Sunday Sport for several years, a half-hour round up of the day's sport broadcast at 7 pm during the summer. I think that that was on Radio 1 as well.

I'm so proud of my Husband David Symonds!!

Thank you for passing by Bacilia and belated congratulations on your marriage.

Thanks Andy. we are quiet happy living in la bella France, David wants to come back to work now, he loves so much Radio.

Happy memories of David at Victory in the mid 70s. Then we met up again after a 20 year gap when I equipped his Cyprus studios. Now seems we are both living in France. Still have a load of the Joan Armatrading Victory jingles on a drive somewhere. Paul Robbins.

I am a big fan of the Bonzo Dog Band and they made quite a few live appearances for Radio 1 Club. Is there anywhere I can find information about Radio 1 Club episodes?

I would love to contact Dave again - haven't seen him for over 20 years when he came to our house in Crouch End. Old friend from schooldays, now living in New York, Jo
Bacilia please ask Dave to contact my sister in Berkhamsted. Will be travelling through France on slow trains in July.

Someone---now generally forgotten---who crossed the BBC networks without being a staff announcer [including World Service, too] was the estimable Peter Clayton. His Jazz Notes/Sounds of Jazz was aired on Radio 1 on Sunday evenings [just after Alexis Korner]; he presented Album Time/occasional Round Midnights on Radio 2; Jazz Record Requests on Radio3; occasional speech progs on R4; and Encyclopaedia Claytonica & Jazz For the Asking on World Service. Always youthful-sounding & genuinely engaged, particularly in interviewing jazz musicians.

Dave here. Andy - do you have a copy of my R1 25th anniv article for the Independent on Sunday? You can email to david.symonds@radiocompany.net

David Symonds.. FANTastic... put the kettle on mother... who could ever forget! Happy days trying to listen in on a little transistor radio that had more snap, crackle than pop!!!

I remember David Symonds from his time on Radio 1. He turned me on the the Moody Blues, a band whose music he played quite a lot. If I remember correctly, the last track he payed on his Sunday morning show, which was compulsory listening for me, was @Have You Heard?' from their album 'ON the Thteshold of a Dream'. I've just been listening to some of the clips on this site, and they took me right back to the late 60s, early 70s. Happy Days.

Now to be heard on United DJs radio every Friday night from 10 till 12, repeated Monday morning's 5-yam. Great show - good to hear him again. Still playing the Moodies too of course!

Good old David Symonds my absolute favourite DJ. Turned me onto the Moodies which I have just been listening to.
His enthusiasm for Lost Chord and Threshold of a Dream impacted on me greatly. Keep on truckin' Dave, you were the best but the system sucks and burns the best of us. Never mind, your not alone and its good to know your still with us.
Time now to start searchin to see if I can find you on air or the net.

I used to enjoy the "Much More Music" show on Radio 2 and was sad that it didn't last very long, either time-wise each day, or its length of time on the network. I also frequently say to my wife even today, when it's time for a cuppa, 'David Symonds? Fantastic! Put kettle on mother!". Only tonight did I try to find a recording of this and so I googled it. What a nice surprise to find your blog and hear that jingle once again. Thanks for your dedication.

I remember that jingle! I'd hear this at my auntie's on school holidays.

Indeed he was. We shared the same producer Keith Stewart in Egton House. David Simmons.