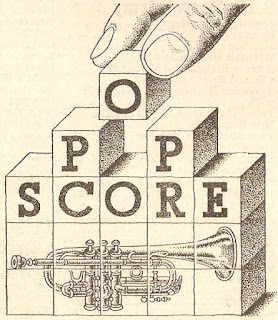 Question: What's the name of the first Radio 2 pop quiz presented by Ken Bruce? If you answered Pop Master then you could be said to be "one quiz out!" The answer is Pop Score, the quiz that ran from 1972 to 1992 which Ken chaired for the last five series.

Devised by Light Entertainment producer Richard Willcox is was initially seen as a Radio 1 versus Radio 2 contest (early series were carried on both stations) with Tony Blackburn captaining the Radio 1 side and Terry Wogan representing Radio 2. Popping the questions was Pete Murray. Willcox continued to produce and write all the questions, and indeed do the audience warm-up, for the first fifteen series until Mark Robson took over production. By this time Willcox  had already brought in a certain Phil 'The Collector' Swern to help set the questions. Phil had previously attended some of the show's recordings to 'help' Tony with some of his answers until he was thrown out of the Paris studio a few shows later.

Early guest stars were a  little eclectic to say the least. You can hardly say it was on trend, more like a decade behind. Many of the musicians had been sixties hitmakers with virtually no current chart performers taking part in the early series with perhaps the exception of Lynsey de Paul, Dana, Neil Sedaka, Long John Baldry and Mike Batt. But Deryck Guyler and Reg Varney?

In time under Willcox's tenure a smaller pool of contributors was called upon, often appearing on a other radio panel games. For instance we have actor Patrick Mower (also on The Law Game), singing impressionist Johnny More and Ray Alan (both on The Impressionists), Lance Percival (also on Wit's End and Just a Minute) and Duggie Brown (also on The Name's the Game and Dealing with Daniels). Some folk such as Tim Rice (also on Just a Minute and Trivia Test Match) really knew their stuff but generally it was a chance to muck about and the quiz side was never taken that seriously.

Later series, produced by Robson, Dirk Maggs and Phil Clarke took things a little more seriously, but only just, with people from the music business and DJs. Typically a show might include rounds such as continuing to sing a song after its faded (think of Clue's Pick Up Song), correcting song titles, identifying song covers or  records played backwards, and a final quick-fire round. Throughout the quiz the chairman would, depending on how many points they'd scored in the round, read out so many letters of a song title that team's could guess at any time for bonus points. 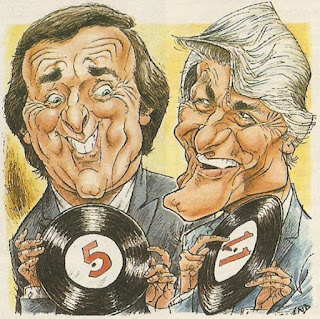 The old Blackburn/Wogan rivalary ended in 1977, though they returned for the 200th edition in 1987. Coming in as team captain for Terry was David Hamilton and a couple of series later Ray Moore replaced Tony. Ray in turn would become chairman when Pete left the BBC and after a series of different captains - Joe Brown, Duggie Brown and Helen Shapiro, who eventually became a show regular - new boy Ken Bruce was drafted in.

Following Ray's untimely death Ken took over as quizmaster (Ken was also hosting the Radio 2 general knowledge show The ABC Quiz) and with David off to commercial radio the team captains settled down to be Helen Shapiro and Alan Freeman.

It all came to an end in April 1992 by which time panel games were virtually a thing of the past  on Radio 2.

Six years later Ken Bruce and Phil Swern, who had both worked together on Pop Score,  put their heads together (together with Ken's then producer Colin Martin) and came up with the format for Pop Master. The daily music quiz which stops the country is celebrated tonight in the Radio 2 programme One Year Out-The PopMasterStory and tomorrow sees the second All Day quiz. 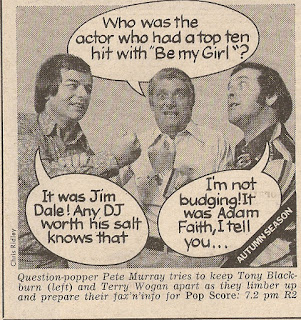 The theme tune used for the majority of Pop Score's run was Chicken Feathers by film and TV composer Pat Williams from his 1968 album Think. In the last 80s Birdland was used for a while, possibly the Manhatten Transfer version.

An edition of Pop Score from this series is on Mixcloud here though sadly the last couple of minutes are missing. 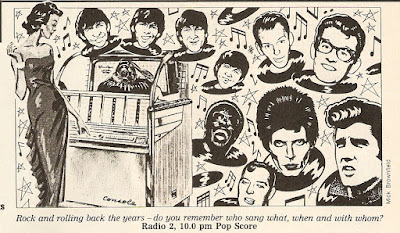 I've unearthed the 7th programme from this series.

Series 11 DH (Other captain was either Duggie Brown, Joe Brown or Helen Shapiro)

The first edition of this series is available on Mixcloud here.

As is typical with virtually all Radio 2 panel shows from this era they've never been repeated since they ended so if you've got any recordings of Pop Score please let me know.

Posted by Andy Walmsley at 11:20 No comments: 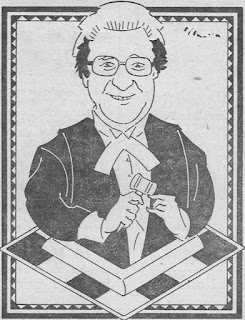 "How well do you know the law? Find out by joining us for The Law Game. Along with our celebrity panel you can hear details of law cases and judge which side you think won. And on the bench as usual presiding over the programme is your chairman Shaw Taylor."

Back in the day when panel games had a regular place in BBC Radio 2's schedule The Law Game was one of the best known and longest-running - 17 series over 16 years. The premise was straightforward enough: three playlets were acted out by three members of the BBC's Drama Repertory Company in which matters of the law are played out in various settings or in court. After chairman Shaw Taylor dings his bell to end the sketch the celebrity panel have to identify what laws have been broken and by whom. Team members then bet points, from their starting pot of 50 points, on the outcome of the case. "It's quite educational, not just an excuse for three celebrities to fool about", said Shaw Taylor to the Radio Times in 1985.

The Law Game was devised by comedy writer Brad Ashton and he wrote all the mini-dramas, offering injecting the odd comedy line. Ashton had been writing since the mid-1950s on radio shows such as Show Band Show, London Lights and later series of Life with the Lyons. On TV he wrote for Tommy Cooper, Dick Emery, Mike and Bernie Winters, Lennie Bennett and Jerry Stevens and for Little and Large. The format of The Law Game was perhaps inspired by the guess who committed the crime programme Guilty Party (1954-62). See John Arlott blog post.

Shaw Taylor, best known on TV for Police 5, seemed a natural choice as series chairman with a mix of light-hearted authority. He was not unfamiliar in this type of role having presented a number of ATV game shows in the late 1950s/early 1960s when commercial television was devouring as many US formats as it could get through. On Radio 2 in the 1970s he also chaired The 78 Show and Pros and Cons, more of which later. 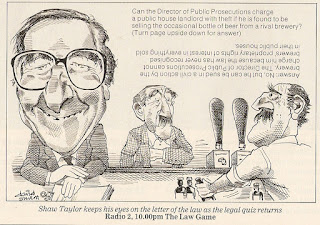 The Law Game first aired on Radio 2 in September 1976. The celebrity panel usually featured at least one actor together with journalists, broadcasters and comics, though not as many as today's panel games are stuffed with. Favoured panellists were Claire Rayner, Denise Coffey and Nerys Hughes. Produced by the Light Entertainment department initially under the guidance of Richard Willcox, though over the years several young producers who went on to bigger things got a chance to work on the show including the late Danny Greenstone, Paul Mayhew-Archer, Richard Edis, Jan Ravens, Andy Aliffe, Dan Patterson, Lissa Evans, Sioned William, Sarah Smith and Caroline Leddy.

The Law Game hasn't been repeated since it ended nearly 30 years ago so here's an opportunity to hear a couple more (in addition to the two I've already uploaded to YouTube in 2015 and 2020.

From 23 November 1981 this edition has a panel of Diane Keen, John Junkin and Lance Percival. Acting out the scenes are Miranda Forbes, Nicholas Courtney (so one for Doctor Who fans)and Ronald Herdman.

From the following year, 19 July 1982, we have Sandra Dickinson, Matthew Kelly and Fred Housego sitting in judgement. The actors are Steve Hodson, Miranda Forbes and Vincent Brimble.

The other Brad Ashton creation was Pros and Cons. In fact it started the year before The Law Game but had a shorter run, just seven series over eight years. A number of the cons were experienced by Brad himself, including one in the 1982 edition below. Many others came from contacts he'd made at Scotland Yard. Writing in the Radio Times in 1980 he admitted that "I get strange looks when I tell people that my hobby is collecting confidence tricks. So far I've got 340 and used 144 of them in the sketches aimed as fooling the panel." His interest began on a trip to new York in 1956. "I was a prototype for all innocents abroad. The airport cab driver circled the whole of New York State to get me to my hotel just two miles away. He was about to do a lap of honour when I recognised a store we'd passed three times."

The format of Pros and Cons was the same as The Law Game, three short sketches played out with enough clues to help or mislead the three celebrities on the panel to identify the con, the person(s) doing the conning and the person(s) being conned. The panellists were a pretty mixed bunch (see series details below) but included a fair number of personalities from the sister show. The series  producers included some very experienced BBC hands such as Alistair Scott-Johnson of The Navy Lark fame, Ian Fenner and Trafford Whitelock, as well as Ros Bartlett, Jamie Rix and Richard Edis.

In this edition from 17 November 1980 the sleuths are Claire Rayner, David Jason and Roy Hudd. The repertory company are Rowena Roberts, John Church and Trevor Cooper.

The second recording comes from 24 February 1982. The panellists here are Kenny Everett (that week's Radio Times cover star), Stephanie Turner (at the time known for her lead role in cop drama Juliet Bravo) and Derek Nimmo. Acting out the scenes are Adrian Egan, Miranda Forbes and George Parsons. 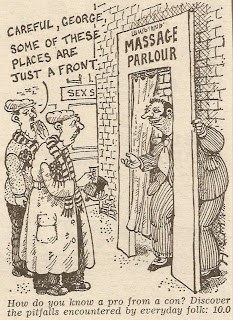