A mouse you say? In the studio? Yes, unexpected rodent sightings did seem to be commonplace around the BBC and I've dug out audio evidence of a couple of incidences.

First, the now infamous mouse-related episode up at Media City in January 2013 during Shelagh Fogarty's 5 live show. As guest Mike Linnell spots the unwelcome intruder there are girlie screams from Shelagh as she hops onto her chair in a scene reminiscent of an old Tom and Jerry cartoon. "It's on the bloody table," she exclaims.


This all happened just a month after another mouse had popped up during Kate Kinsella's weather forecast, presumably from a London weather studio, during Iain Lee's BBC Three Counties morning show. This one is "quite sweet actually" as Kate rejects Iain's suggestion to despatch it with a book or a block of wood.

Posted by Andy Walmsley at 17:25 No comments: 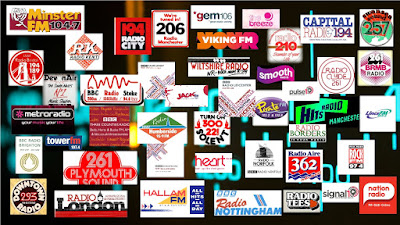 Local radio is under the cosh at the moment. Commercial stations dominated by the Global/Bauer duopoly relentlessly head towards networked shows and centralised production. In my home town the Viking FM breakfast show comes from Sheffield, 70 miles away, and just last week the rockin' church in Preston closed its doors.  That said the number of stations on offer, on DAB and online, continues apace. Last year hardly a month passed without yet another fresh addition to one of the existing brands.  Localness hasn't been totally abandoned as this year OFCOM are expected to announce further community radio licences this month.

Meanwhile the BBC is feeling particularly unloved both by the Government and the public whose perception of the Corporation barely extends beyond Question Time and the Today programme. Calls to 'scrap the licence fee' always overlook the funding model for radio in general, and BBC local radio in particular. But BBC local stations continue to demonstrate their worth. Consider the coverage of the flooding in the last three weeks - and how often is it that adverse weather shows the strength of a truly local service? - with some commendable reporting on many stations.  And only last week Radio Cornwall's Donna Birrell wrote of the important personal connections that radio makes when relating the story of 'Clara from Bude'.

Local radio did enjoy something of a golden age in the 1980s and 90s when new stations were coming on stream, AM and FM services were splitting, broadcast hours expanding and budgets increasing. But it wasn't always like this. The birth of a BBC local radio network was years in development with co-funded experimental stations run of shoestring budgets and reliant on Radio 2 and Radio 4 programmes to fill the holes in the schedule. Independent local radio, when it finally arrived, offered a true livelier alternative to those lucky enough to have a station in their area but, hamstrung by regulatory restrictions , struggled to make a profit and was not averse to some BBC-style programming like Swops and Trades and Late Chemists Rotas.

This weekend the documentary The Village Loudspeaker - the nickname Dave Bassett gave Plymouth Sound when it started - reflects on the evolution of local radio. It's a bi-media effort with a half-hour television version on the BBC News Channel and an hour long radio version on Radio Solent on Sunday afternoon.

Producer Richard Latto has been digging around in the archives and sourcing material from private collections  to uncover video that's not been seen since its first broadcast. There are also newly-recorded interviews with the likes of Martin Kelner, Johnnie Walker, Les Ross, Graham Dene, Louise Churchill,  Darren Lethem, Tony Gillham, Duncan Warren, Stephanie Hurst, Chris Burns,  John Foster and Graham Mack.  There are over 40 video clips to support this programme on the BBC Radio Solent website here.

Richard says “This isn’t a definitive history of local radio, it’s a flavour of local radio and a chance to reflect on how it has changed and evolved over the years. With all the recent changes, especially in the commercial sector, local radio has generated a lot of discussion from both industry insiders and listeners, who have heard it evolve at great pace.”

This is the radio version of The Village Loudspeaker:

Further reading:
Last year David Lloyd asked is there a Future for Local Radio.
On this blog I've written about the first 19 ILR stations and many of the early BBC local stations as they hit their 50th anniversaries. See under the 'Down Your Local' label. See also The People's Radio blog post.
Matthew Linfoot's PhD thesis on the history of BBC local radio (1960-80) is online here.