The BBC Light Programme, launched 70 years ago today, so often gets a bad press. I've lost count of the number of times I've read or heard someone say that the station offered little in the way that was new and entertaining. Admittedly the view is often expressed by those that fondly remember the 60s pirates stations. And there's no denying that the BBC both wilfully and by dint of MU agreements and lack of needletime was spinning very few pop records. And when you heard programmes like this you can understand why:


In 1964 an editorial in the Sunday Express offered the opinion that Radio Caroline was providing millions of people with "lively and gay music" and asked why can't the BBC "turn over the Light Programme to just this kind of entertainment instead of the pompous, pretentious pap it so often purveys?" 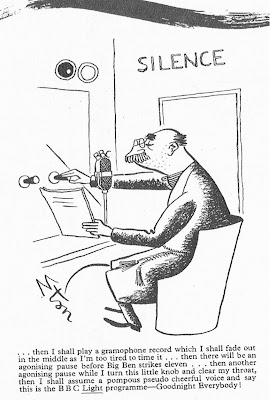 Does the much-maligned Light Programme deserve this slating? After all the most most-listened to shows on BBC radio in 1964 where all on the Light: Two-Way Family Favourites, (1) Housewives' Choice, Children's Favourites, Saturday Club and Easy Beat.  This is also the sound of the station:


The BBC Light Programme first went on air on Sunday 29 July 1945 as part of a promised "first step towards a return to normal broadcasting". For the Home Service there was a return to the pre-war regional service (2) whilst the Light succeeded, at least for British listeners, the General Forces Programme and also the Allied Expeditionary Forces Programme. Indeed, as you'll hear in the programme below, the Light Programme borrowed from the AEFP its Orange and Lemons interval signal. 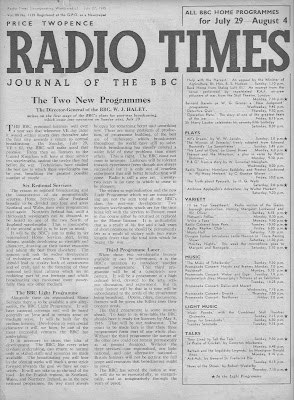 During the planning stages, which had started back in 1943, the idea of a 'popular' station had been mooted to compete with "sponsored programmes from our neighbours", i.e. Radio Luxembourg. Whilst BBC bosses wanted the same kind of programme mix that listeners enjoyed on the Forces network there was an insistence that the new stations should be "firmly British in character" and that there should be "an effective resistance to the Americanisation of our entertainment".

The Radio Times promised that the service would have programmes that were new but there would also be "old favourites reintroduced in a new form." Some of those wartime programmes that continued on the Light Programme included ITMA,  Music While You Work and Variety Bandbox. Comedy series badged under the Merry-Go-Round title split off to become Waterlogged Spa, Stand Easy and the much-loved Much Binding in the Marsh. 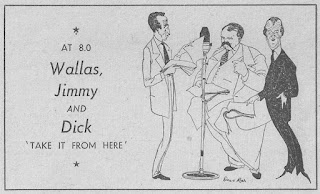 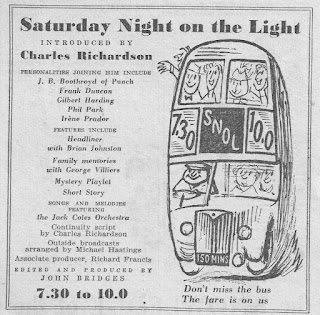 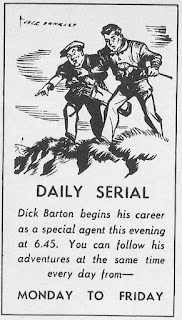 Some of these programmes are recalled in this fiftieth anniversary tribute to the Light Programme presented by Chris Stuart. It was broadcast on BBC Radio 2 on 30 July 1995. Edits have been made for some copyrighted music.


This is how the BBC Year Book for 1946 described the new Light Programme service:

Some months before the end of the war the Director-General promised that within ninety days of the end of hostilities in the West, the BBC would provide its listeners in the United Kingdom with two full-scale alternative programmes ; and that regional programme services, necessarily interrupted for security reasons, should also return. VE-day came on 8 May, and the programme
and technical staff at once began to make good the promise, even while a week of special victory programmes was being broadcast. On 29 July the new programmes were launched ; the `Home'
service with its regional variations, and the new alternative `Light' programme.

THE LIGHT PROGRAMME- `Designed to appeal not so much to a certain class of listener -but to all listeners when they are in certain moods'
The Light Programme, latest -comer to the air, sets out to give British listeners a continuous service of information and entertainment, contrasting now with the various Home Services and in future with the Home Services and the third programme that is to begin in 1946. It is broadcast nationally on long wave, backed up by medium -wave transmission in urban areas, where long -wave
reception may be subject to interference. The long wavelength is the famous 1500 metres used for the National Programme before the war, and devoted to the European Service from 16 November, 1941, to 28 July, 1945 ; now back at the service of listeners at home. The medium wavelength, 261 metres, is also that used for the subsidiary National stations before the war.

Both these predecessors were addressed to specialized audiences, and the civilian listener at home knew that in listening to them he was virtually eavesdropping (which, by the way, is a popular pastime with British listeners, as was evident with the European Service and the AEF Programme). Unlike them, the Light Programme is meant for civilians, and they have the right to expect it to give them what they want.

The title `Light' Programme does not mean that everything broadcast in it must necessarily be frothy or frivolous. It does mean that the overall content of the daily or weekly programme contains a higher proportion of sheer entertainment than either the Home Service or the third programme. More Variety shows, dance bands, brass bands theatre organs, popular orchestras, sport ; more `easy listening' in general, designed to appeal not so much to a certain class of listener but to all listeners when they are in certain moods. This does not exclude a proportion of more serious items -religious services of a rather different kind from the broadcast service that has become traditional, talks, fine music played by great orchestras (but not formal `symphony concerts'), plays, dramatic features on subjects with wide appeal. But these items will always form a minor element in the programme as a whole.

In two respects the Light Programme forsakes its special character in order to take its place in the BBC's general plan. It carries news broadcasts, at times which alternate with those of the Home Service, and these news broadcasts do not differ in style from the Home Service news, although they are read by different voices. Also it carries an hour a day of Forces educational broadcasts planned in consultation with the Service education authorities. These are included in the Light Programme because its long -wave transmission brings them within the reach of the greatest possible number of Service listeners. Among these are the British occupation forces in Germany, and it is worth mentioning that there has from the first been close co- operation between the Light. Programme and the British Forces Network in Germany, run by Army Welfare. The BFN relays a large proportion of the Light Programme and in return contributes regularly to it. A notable example of this co- operation is the two-way 'Family Favourites' series, in which a tune requested by a civilian listener for a relative in the occupation forces is followed by a tune requested by a Service man in Germany for a relative at home, the whole programme being broadcast both in the Light Programme and by
the BFN. 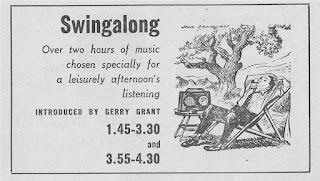 1 - Family Favourites topped 18 million listeners, the biggest audience of any regular radio or BBC TV programme. (Source: BBC Handbook 1964)
2- The regions were London, Midland, North, West, Scotland and Wales  with Northern Ireland having to share one of the North regions wavelengths (285.7m) due to a shortage of available wavelengths.
3- Although the regular series of Housewives' Choice started in March 1946 the BBC Genome site lists two earlier weeks: w/c 26 November 1945 with Roy Rich and then w/c 1 January 1946 with Franklin Engelmann.
4- In fact Have a Go  had started on the Northern Region of the Home Service some 6 months earlier on 4 March 1946 but was quickly transferred to the Light Programme where it ran until 1967. Of course the other programme transferring from the Regions, and still broadcast today, was The Archers from the Midlands. Another popular show was Welsh Rarebit, from Wales (naturally), that had started life as a magazine programme in 1940 but became a 60-minute variety show from 6 April 1949.
5- The first 3-part series in 1964 had aired on the Home Service but the second and all subsequent series were broadcast on the Light Programme and then Radio 2.

These extracts from the past on the Light Program brings back so many memories.

50 years on I still miss the Light Programme with its great variety of programmes. It really did cater for everyone. As a teenager, I loved the light music programmes (particularly Music While You Work and Morning Music.) Numerous orchestras, bands and ensembles, all with their own distinctive styles regularly broadcast delightful, tuneful music. We had brass and military bands, organists, pianists, dance bands, plus comedy and variety shows.
I was not keen on pop, even as a youngster - now it's impossible to avoid and much of it is awful. Sadly, the youngsters who think it's good don't have the opportunity to hear anything better!