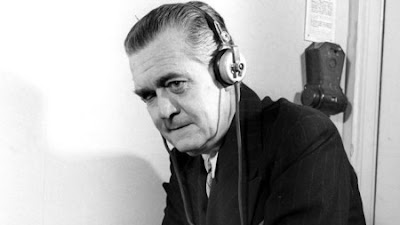 If families had their favourites played on Sunday and housewives got their choice on weekdays then on Saturday mornings it was Children's Favourites.  In this the fifth of nine posts recalling the years of the BBC Light Programme I remember the time when kids requested the Swedish Rhapsody and Sparky's Magic Piano.

Even if you don't know remember Children's Favourites you'll know that delightfully cheerful theme tune, Puffing Billy. But the forerunner of the show started just over a year earlier as Children's Choice and it used the Housewives' Choice theme In Party Mood until Puffing Billy was shunted in a year or so later.

Children's Choice started off as a Christmas Day 1952 request programme on the Light Programme. The host was the singer Donald Peers. Throughout 1953 it effectively ran as a Saturday morning extension of Housewives' Choice; whoever was presenting during the week covered the junior edition too. Early record favourites were The Runaway Train by Vernon Dalhart, Nellie the Elephant by Mandy Miller and Charles Penrose with The Laughing Policemen - all still instantly recognisable to Stewpot's listeners some twenty years later.

The programme had a rebrand on 2 January 1954 to become Children's Favourites. In charge of proceedings was Derek McCulloch (pictured above), better known from his Children's Hour programmes in the 1930s and 40s as Uncle Mac. McCulloch had retired from the BBC in 1950 but became the somewhat testy compère of the request show, his familiar Children's Hour sign-off of "Goodnight children...everywhere" transformed into the opening words "Hullo children...everywhere". 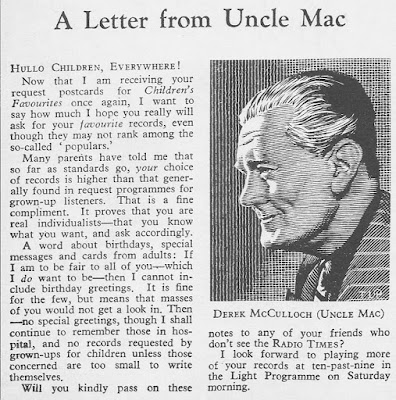 Uncle Mac's last edition was on 5 December 1964. By then even Children's Hour had been axed and the BBC wanted some younger blood on Children's Favourites. Perhaps this was in response to the growing competition from the pirates, even if the requests still came in for Max Bygraves singing You're A Pink Toothbrush, I'm A Blue Toothbrush.

Though McCulloch presented the lion's share of the programmes in the first eight years you could also write in to Archie Andrews and Peter Brough, Max Bygarves, Rex Palmer (Uncle Rex), John Ellison, Spike Milligan, Christopher Trace and Jim Dale. Between 1964 and 1967 you'd have heard Paddy Feeny, Michael Aspel and Leslie Crowther. And it was Crowther who took the show to Radio 1 where it became Junior Choice on 30 September 1967.

From 24 October 1965 Children's Favourites added a Sunday morning edition. The Radio Times advised that this double helping - initially presented by Paddy Feeny - aimed to "satisfy the mounting number of requests (from both parents and children) which has kept this popular morning programme spinning along for eleven years". It went on to say that "children - from toddlers to teenagers - are explicit about what they like and why. Even the youngest listeners are quick to follow the trends of the new pop sounds, but there's also a constant demand for all those intriguing children's 'standards' - many of them off-beat novelty records which nudge the charts without reaching the hit parade but still delight generations of children. Among the artists who are perennial favourites are Danny Kaye, Charlie Drake, Julie Andrews, Rolf Harris, Burl Ives, Doris Day, Petula Clark, Cliff Richard and Anthony Newley." I'll leave you to provide the appropriate novelty song titles for these singers.

The early years of Children's Favourites are recalled in this 1988 Radio 4 documentary written and presented by Jeremy Nicholas: Hullo Children Everywhere. Nicholas described part of the appeal of the programme as "its thumb-sucking security, each week the same old welcome friends singing the same old welcome songs".

In this second recording it's former Junior Choice presenter Ed Stewart who recreates the days of Children's Favourites. This show was broadcast on Radio 2 on 29 July 1995 as part of the station's celebrations of the Light Programme years.
Posted by Andy Walmsley at 10:00

Sorry to crash this blogpost to ask about another one, but I'm scratching my head trying to find the name of a theme tune I think was used on Capital Radio in the 1970s by a female presenter with an American accent - quite possibly not a DJ. If you can help please drop me a line at Eutychus [at] ship-of-fools.com