On the Light - Part 8 "Music for Everyone" 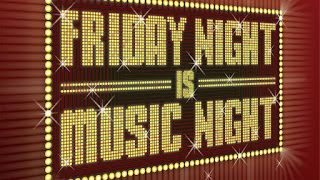 Friday Night has been Music Night for over sixty years. In the eighth of nine posts celebrating the BBC Light Programme I pay tribute to Friday Night is Music Night, still a fixture in Radio 2's schedule and one that takes the accolade of being the world's longest running live orchestral music show.

First heard on 25 September 1953 (1) the show was created to showcase the BBC Concert Orchestra that had been formed the previous year. (2) The brief to principal conductor Sidney Torch was to create a Friday-night show that would "help people relax after the week's hard work and put them in the right mood for a happy weekend."

The programme's repertoire consisted of that loosely-defined genre of 'light' music, operetta, military music, show tunes with the addition of songs from the Great American songbook, film themes and, more recently jazz classic and pop songs. 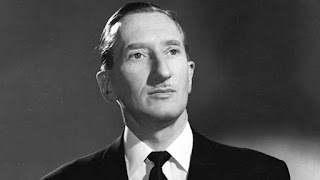 Sidney Torch (above) appeared on Friday Night is Music Night until 1972 but his vision, and indeed, his arrangements remain part of the programme and are often revisited. Other principal conductors have included Vilem Tausky, Kenneth Alwyn, Marcus Dods, Ashley Lawrence, Barry Wadsworth and Robin Stapleton.

Friday Night is Music Night has always toured the country, and occasionally over in Europe, but between 1953 and 1972 its main base was the Camden Theatre. From 1972 until 2002 the usual venue was the Hippodrome, Golders Green. 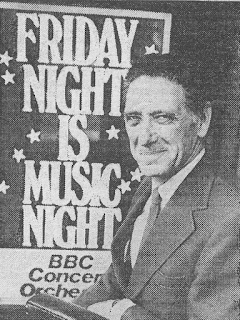 Like many Light Programme music shows the presenting duties fell to one of the continuity announcers. At first this was Philip Slessor and then from 1958 to 1972 the main presenter was Jimmy Kingsbury with some shows being picked up by John Webster, John Hobday, Robin Boyle (pictured above), David Geary, Frank Phillips, Jon Curle, Bryan Martin, Douglas Smith and Eugene Fraser. Robin would become the main presenter, and, to date,  the programme's longest-serving between 1972 and 1998. When he stepped down the role was fulfilled by Richard Baker, Brain Kay, John Dunn and the current incumbent Ken Bruce, as well as many guest presenters.

For the programme selection I'm turning the clock back just twelve years when Friday Night is Music Night celebrated it's fiftieth anniversary. Ken Bruce presents the show from the Symphony Hall in Birmingham with the BBC Concert Orchestra conducted by Robin Stapleton. This show was broadcast on Radio 2 on 5 September 2003.

1 - In its early days the programme had an appreciative audience of four million (1958 figures). By 1963 it pulled in one and a half million.


2 - It traces its origins to the BBC Theatre Orchestra that was re-formed as the BBC Opera Orchestra in 1949 and then the Concert Orchestra three years later.
Posted by Andy Walmsley at 10:00