On the Light - Part 4 When Housewives Had the Choice 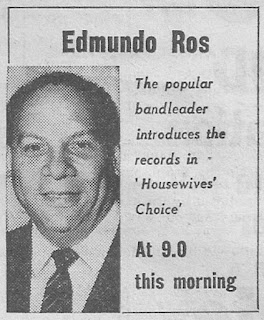 Whenever TV producers want to evoke an image of cosy 1950s British domesticity they will invariably reach for the music track In Party Mood. More than half a century after it was first used Jack Strachey's piece still has the ability to immediately strike the right nostalgic note.
In Party Mood was the theme to the Light Programme's daily request show designed to accompany the morning chores after the menfolk had gone off to work - this was the 1940s after all - Housewives' Choice.

The idea for Housewives' Choice actually came from Sweden - the reference books make no mention of its title or its longevity - following a visit to the country by the Light's Programme Controller Norman Collins. It launched on 4 March 1946 (1) and lasted until the close of the station some twenty-one years later.

Musical requests ranged from the traditional - Greensleves and the Eton Boating Song - to the popular - Don't Sit Under the Apple Tree With Anyone Else But Me by the Andrews Sisters and Charles Trenet's La Mer. In 1956 the favourite artists were Perry Como, Ruby Murray, Percy Faith, Pat Boone and Doris Day. The programme's production office groaned under the weight of 3,000 postcard requests a week. At its height over eight million listeners tuned in.

The programme's first compère was the actor and broadcaster Robert MacDermot. Others who proved popular in the early days were Bryan Michie and Godfrey Winn. Presenters were generally  booked for a two-week stint; many returned again and again over the years. Some were not re-booked. There were also appearances from BBC staff announcers. You'll notice - in the list at the foot of this post - that of the 250+ names the majority are men. During the week it seems, in contrast to Sunday's Family Favourites, women were not allowed to play record requests.

Of the four women who did present Housewives' Choice, three were on the BBC staff and had broadcast during the war. They all featured on the programme in the late 1940s and all were also associated at one time or another with Woman's Hour: Barbara McFadyean, Jeanne Heal and Joan Griifiths. The other woman presenter was Vera Lynn, who made a couple of one-off appearances in 1956 and 1962 and then did a fortnight in 1963. 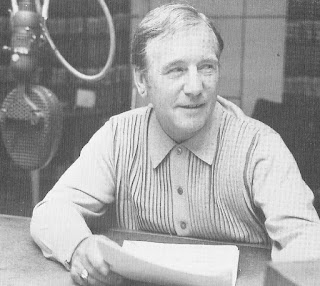 One of the best-known and most-loved of the regular hosts was George Elrick (pictured above), the former big band drummer and singer who would later combine his radio work alongside managing Mantovani and his orchestra. In his autobiography (2) he recalls that it was veteran DJ Christopher Stone that put his name forward to Anna Instone, the indomitable Head of Gramophone records whose domain included Housewives' Choice. (3)

When the programme first started the presenters were expected to help choose the records from the submitted requests (4) and turn up to the studio early for a complete run through, all scripted of course. But George Elrick enjoyed a little latitude to deviate from the script and one morning "after the last record had been played and I knew I was off the air, I removed my headphones, leaned back in my chair and began to la-di-da the signature tune which I could hear faintly from the room where they played the records. Unfortunately my engineer thought I was still talking and, unbeknown to me, hastily switched me back on". Concerned that he might get a ticking off from the BBC he was surprised to hear programme organiser Pat Osborne tell him: "Wonderful touch, old boy. Do it again tomorrow." In the following show he added the words "See you all again tomorrow morning..." and that sign-off became a programme institution.

In 1965 the BBC recorded an average daily audience for Housewives' Choice of 8.5 million, by far the largest weekday radio listenership. The following year this had dropped to 6.5 million - the impact of the pirate radio stations perhaps? But its days were numbered as in September 1967 the Light Programme came to an end, and with it Housewives' Choice. Final presenting duties were taken up by David Hamilton, his first and last appearance on the show.

Although the title disappeared on 29 September 1967 the programme format did not. The following week a 90-minute daily record requests show was back in the schedules of Radio 1 under the guise of Family Choice. (5) Like its predecessor it has hosted by figures from the entertainment world and disc jockeys. Family Choice ran until 26 September 1969, replaced the following week by Pete Murray's Open House on both Radio 1 and Radio 2.

Very little exists in the way of recordings of Housewives' Choice. The BBC kept just a few minutes of a 1964 edition with Kenneth Horne. Online you can find 40 minutes of a 1950s programme with Bob Danvers-Walker. And that's the sum total of 21 years of broadcasting.

In 1989 Russell Davies celebrated the programme in When Housewives Had the Choice - though the Radio Times billings suggest recordings from the original programmes were available - and in 1990 George Elrick was back at the helm for a one-off May Bank holiday special. I only recorded the first fifteen minutes of the show so I've no idea how he signed off this particular edition.

In 1995 to celebrate fifty years since the launch of the Light Programme there was another one-off programme, this time with Roy Hudd looking after proceedings. Roy hadn't presented Housewives' Choice first time round, but he had been on Family Choice. This is my recording of that complete show.

1- Although the regular series of Housewives' Choice started in March 1946 the BBC Genome site lists two earlier weeks: w/c 26 November 1945 with Roy Rich and then w/c 1 January 1946 with Franklin Engelmann. The programme was broadcast from 9.10 to 10 am, but later started at 9 am and finally 8.30 am.
2 - Housewives' Choice: The George Elrick Story by George Elrick (Mainstream Publishing 1991)
3 - George's first appearance was on 9 December 1946. Between 1946 and 1967 he hosted the show about 240 times.
4 - Richard Murdoch, who was a regular DJ on the Light Programme alongside his comedy work, remembers that in the early days "we could take home the postcards and compile our own programmes. One could have filled a whole hour of requests for Gracie Fields singing Bless this House." As quoted in the foreword to The Golden Age of Radio by Denis Gifford (Batsford, 1985)
5 - On occasions in the 1950s and 1960s Housewives' Choice had been billed as Family Choice, usually on Bank Holidays.  Radio 1's Family Choice was also simulcast on Radio 2.

Housewives' Choice Presenters
This is a list of all the presenters in order of their first appearance:

My mother had a request done by her sister for either "Please Release Me" or "The last Waltz" unfortunately I have lost the newspaper article as a newspaper did a story on Mum getting a bunch of flowers from her favourite singer Engelbert Humperdinck. I would love to have a copy of this newspaper article and would cherish it as my Mother is no longer alive.