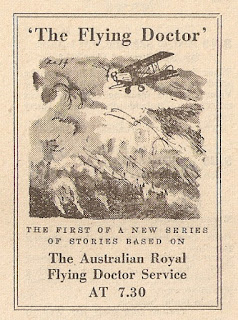 Australia's Royal Flying Doctor Service owes its existence to a forward thinking Presbyterian minister, a young airman and the inventor of the first commercial combine harvester. The service, now in its 91st year, has stimulated writers and film producers to tell stories of medical emergencies but with the added bonus of aeroplanes rather than ambulances and set against the backdrop of the Australian Outback. 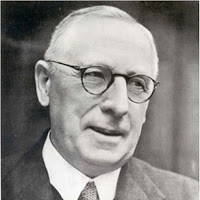 It was the Reverend John Flynn (pictured left) who, in 1911, on a posting to a remote mission in South Australia, was struck by the lack of nearby medical facilities. The inspiration for a medical service of the air came in the form of a letter to Flynn sent in 1917 by a Lieutenant Clifford Peel, a former medical student and at that time a pilot for the Australian Flying Corps. His proposal was to use aeroplanes to ferry the sick and injured.

The Rev Flynn continued to campaign for an airborne service for the next decade but it didn't become a reality until he received a generous bequest to be used for "an aerial experiment" from the Australian industrialist and inventor Hugh McKay. McKay is credited with inventing and manufacturing the first commercially viable mechanical combine harvester and he set up the Sunshine Harvester Company to produce this and other machinery. Flynn had already teamed up with QANTAS founder Hudson Fysh to get his idea off the ground, so to speak, but the influx of  funds allowed him to properly establish the Australian Inland Mission Aerial Medical Service. By 1942 it was known as the Flying Doctor Service and received the Royal prefix in 1955 following a tour of Australia the previous year by Queen Elizabeth II.

When it came to stories based on the service first out of the hangar was a 1936 Australia/UK co-production film The Flying Doctor starring Charles Farrell and Mary Maguire. It was shot at the short-lived Pagewood studios in Sydney by National Productions with financial and technical support from Gaumont-British Pictures. For many years the  film was considered to be lost, or at least missing its final reel, until it was unearthed during the demolition of the Figtree Film Studios.

It was two decades later that BBC radio decided commission a series set around the Flying Doctor service, more on that in a moment. 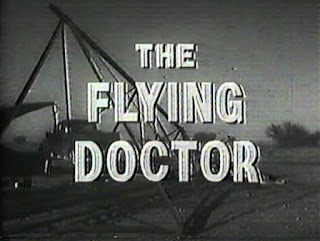 Meanwhile, inspired by the radio programme, British television got in on the act with a Sunday night series of 39 programmes airing on ITV in 1959 and 1960. The Flying Doctor was an Associated British Picture Corporation production for ATV filmed at Elstree and on location in Australia. It starred American actor Richard Denning as Dr Greg Graham, a US medic on leave from a San Francisco research institute who takes over the duties of a blind doctor colleague (played by Peter Maddern).On hand was nurse Mary Meredith, played by Jill Adams and pilot Charley Wood played by the only Australian in the main cast, Alan White.

The story of the Reverend John Flynn himself was told in an 8-part series on the Light Programme in 1963. Simply titled Flynn, the dramatised account by Rex Rienits starred New Zealand actor Walter Brown.

BBC television took up the story of Flynn and the Flying Doctor service in two series of 5-minute readings that went out on Sunday teatime in November/December 1967 and April/May 1968. Read by Aussie actor Vincent Ball as part of the Sunday Story strand, the first four episodes titled Flynn of the Inland told Flynn's story whilst the second five, Tales of the Inland, looked at other pioneers of the service.

It was the mid-80s before medical tales of the Outback resurfaced in the form of a long running (over 200 episodes from 1986 to 1993) series from Crawford Productions titled The Flying Doctors. It was headed by an all-Australian main cast that included Andrew MacFarlane, Liz Burch, Lenore Smith, Robert Grubb, Lewis Fitz-Gerald and Peter O'Brien. Set in the fictional town of Cooper's Crossing the programme had a more soap opera feel to it, romance amongst the medics was just as important as the medical emergencies. The series cashed in on a boom in Australian produced soaps such as Neighbours, Sons and Daughters, The Young Doctors and A Country Practice.

In the UK the initial mini-series was shown on Channel 4 but BBC1 picked up the main ongoing series in 1988 and continued to show it until 1997, some four years after production had ceased. All the episodes are available on DVD. 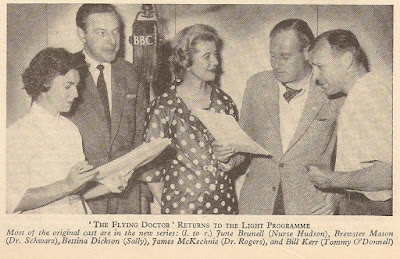 "Flying Doctor calling Wallamboola base" became something of a catchphrase for anyone listening to the BBC Light Programme series that ran from 1958 to 1963. The Flying Doctor was written by the Australian writer Rex Rex Rienits and proved to be a very popular show, clocking up six series and over 120 episodes.

Rex Rientis had arrived in the UK on the back of some research work he undertaken for the 1949 Ealing Films production of Eureka Stockade, the story of a rebellion in 1854 by old miners in Victoria, Australia. Rex wrote or adapted a number of radio drama serials for BBC radio during the 1950s before being asked to pull together a series set around the Flying Doctor service.

Set in the fictional town of Wallamboola the main character was an English doctor, Chris Rogers, played by Scottish actor James McKechnie. Writing in the Radio Times ahead of the second series Rientis described the lead character as "the son of a small suburban shopkeeper, which means he has had to learn his job the hard way, through scholarship, part-time work and countless hours of sheer hard study. On first impact, most Australians found Chris a little too dedicated and serious-minded; and he found most Australians a little too casual and easy-going. But all that is straightening out now. Mutual understanding has brought mutual liking and respect, and discerning listeners may even note that nowadays a slight touch of Australian slang is apt to creep into Chris's speech." 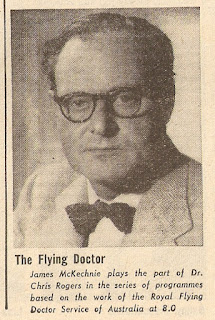 Assisting Rogers was nurse Jane Hudson, the daughter of a wealthy Sydney industrialist. "Jane likes to dance, she dresses better than most nurses can afford, she is good at sports - particularly tennis - and her fast, red sports car is the pride and terror of the district". Nurse Hudson was played by June Brunell, who like most of the cast apart from the lead, were all from Oz. However, from the third series in 1960 the main nurse role went to New Zealand actress Rosemary Miller as Mary West. Miller was already well-known as playing Nurse Pat Roberts in ATV's Emergency Ward 10 and by the time she left the soap and joined The Flying Doctor was married to actor Peter Hawkins of Bill and Ben fame.

The pilot for the Flying Doctor service was Tommy O'Donnell played by Bill Kerr, at the time still acting as Hancock's dim-witted sidekick in Hancock's Half-Hour. O'Donnell learnt to fly as part of the R.A.A.F as a sergeant pilot. His sense of humour is "irrepressible, his conversation is racy, and he admits to two weaknesses - girls and very cold beer."

Rientis continued to work for BBC radio during the 1960s writing more drama serials for the Light Programme and then Radio 2 including Pride of the Pacific (starring Bill Kerr as Johnny Pride, skipper of the cargo ship Cleo), Agent X09, Charter Pilot (more Bill Kerr, this time as pilot Steve McFarlane) and The Man from Snowy River. 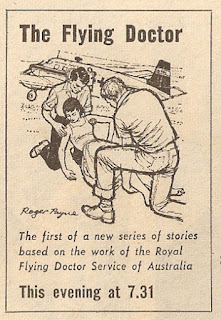 The Flying Doctor series, popular though it was - the "Flying Doctor calling Wallamboola base" line even appeared in The Radio Ham episode of Hancock's TV series and there was at least one Flying Doctor annual- it has never been repeated since the early 60s. BBC Sound Archives retained just five programmes in the rather random way they were prone to do. It seems that the BBC Transcription Service issued a grand total of 54 episodes, just under half the total output, of which about 30 are known to have survived. However, no copies are known to be circulating amongst collectors and old-time radio enthusiasts.

So here is a plea. If you chance upon this blog post and you have in your possession, or know of any, off-air recordings of The Flying Doctor radio series please let me know. Alternatively see this post on the Missing Episodes forum, link here.

Retained in BBC Sound Archives: s02e02 The City Orchid, s02e03 SOS for Baldy, s03e10 The Comeback, s03e15 The Rat Trap and s05e02 The Filibuster
Update: since first publishing this blog post I'm now aware that BBC Transcription Services issued 54 episodes of the series. Maybe one day some of these will turn up on Radio 4 Extra. [14 June 2020]

Thanks Andy. Great research!! There are some Flying Doctor annuals on eBay right now. I think they were companion publications to the BBC Radio series.

There could be something here: http://colsearch.nfsa.gov.au/nfsa/search/display/display.w3p;page=0;query=%22flying%20doctor%22%20Media%3A%22RADIO%22;rec=0;resCount=10
I might be able to follow this up if you're desperate...

Hi Mark. Yes please - we are desperate. There are no episodes around although Keith Wickham says that he has access to a number of transcription discs. Thanks - Chris B.

Anything further to where one can listen in to those old radio dramas. I well remember listening to The Flying Doctor on BBC radio as a young boy, before the days of tv! Which rather datesmou’!!

Kieth Wickham - who restores off-airs from listeners for R4X - has a complete list of episodes. Sadly in its wokeness the Beeb is unlikely to air any eps anytime soon. There is a t.v. version from Oz. available on DVD.

No off-air tapes are circulating amongst OTR enthusiast groups.