Turn of the Year 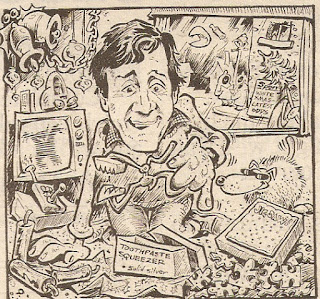 So that's another decade nearly over. Where did it go? I can't let opportunity slip by without turning back the clock once again and this time taking you back to the turn of the year exactly four decades ago with this extra large slice of radio comedy.

Throughout the 1970s BBC Radio 4 had a Christmas Day tradition of featuring an hour or so of comedy and music linked together by David Jacobs (1972-77) or Richard Briers (1978-79 & 83). Essentially this was a festive pick 'n' mix of repeated comedy sketches from record or the BBC's own sound archives and comedy or Christmas songs. The 1983 edition (mislabelled as 1978) of Christmas Briers can be found on YouTube.

For a couple of years Richard Briers also compèred a similar New Year's Day offering, billed as a "Bank Holiday bric-a-brac, a revue of sketches and songs from recent radio shows more typical than topical." The first Turn of the Year show was on 1 January 1979 but my recording comes from the following year.

This edition of Turn of the Year features clips from The Hitchhiker's Guide to the Galaxy, Week Ending, The News Huddlines, The Kings Singers, Marks in his Diary, Hello Cheeky, The Grumbleweeds, The Burkiss Way, Aspects of the Fringe, Peter Goodwright, Victor Borge, The Frankie Howerd Variety Show, The Spinners, Listen to Les, Comedy First, Instant Sunshine, I Like Spike, Quote...Unquote, the Philip Jones Brass Ensemble (music has been edited), The News Quiz, The Atkinson People, I'm Sorry I Haven't a Clue, Something Appealing, Something Appalling and Just a Minute.

The linking script is by Barry Pilton and the producer Jonathan James-Moore.