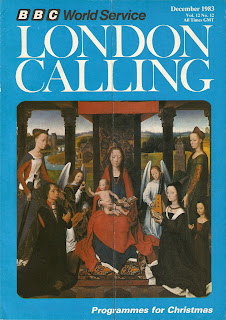 A glimpse into the past to a time when the BBC World Service provided a full schedule of news, current affairs, sport, comedy, music and drama. These are the pages from the monthly magazine London Calling for December 1983 complete with listings and frequency guides.

There are some much missed music shows here: Anything Goes with Bob Holness, John Peel, Jazz for the Asking with Peter Clayton, classical music with Edward Greenfield and Gordon Clyde, and DLT's A Jolly Good Show.

The drama on offer includes productions under the Play of the Week and Radio Theatre banner specially commissioned for the World Service under the head of drama Gordon House. Some such as Puss in Boots and Detective had previously been heard on Radio 4. Some ex-Radio 3 programmes also surface: A Closer Look with poet Vernon Scannell and David Munrow's landmark series Pied Piper.

You could also learn English through the lyrics of pop songs in the frankly bizarre Pedagogical Pop. Sadly there are few examples of the programme floating around the web but they're well worth a listen.

Remarkably some programmes from this month are available to 'listen again' on the World Service website. There are about a dozen December 1983 editions of the arts magazine Meridian (over 2,000 in total), with this one presented by Jim Hiley looking at the music of Abba and the latest Bond film. The theme tune for Meridian by the way is Dave Grusin's Mountain Dance. I know this as a couple of years ago I received a query about it from a chap in Seattle. Correspondence from the States about World Service programmes. It's like being Margaret Howard on Letterbox! 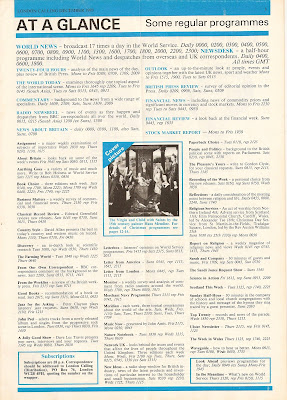 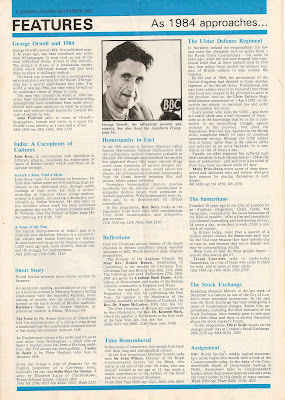 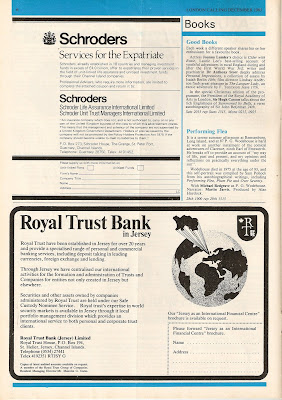 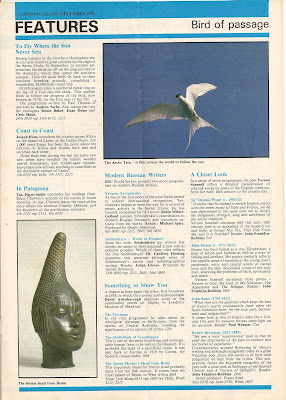 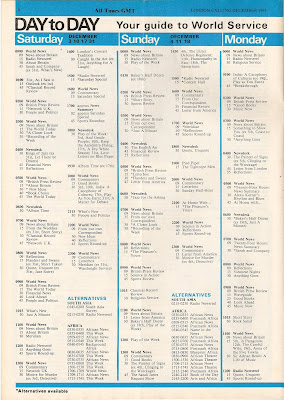 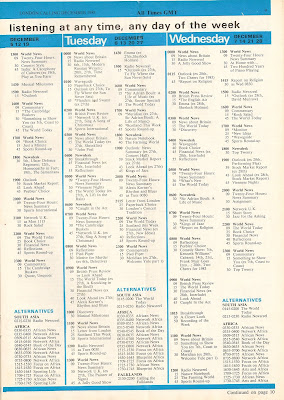 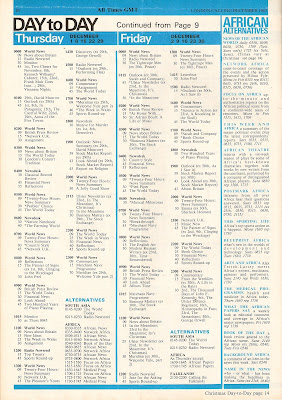 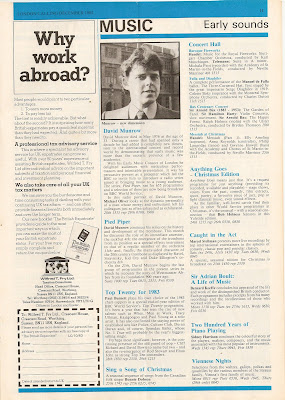 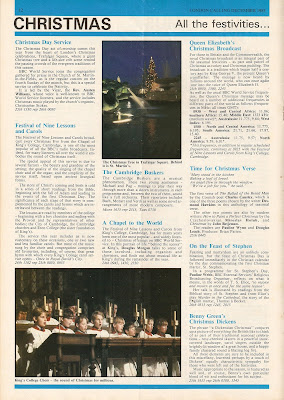 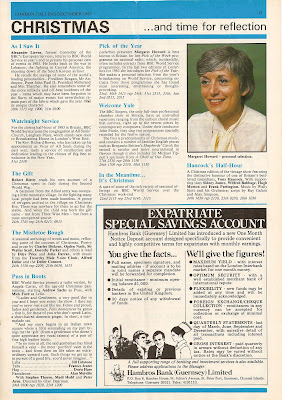 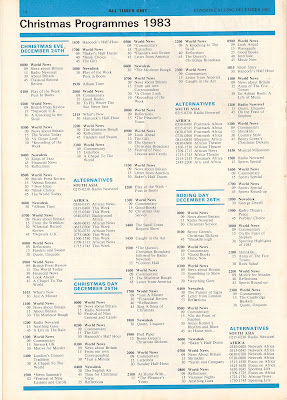 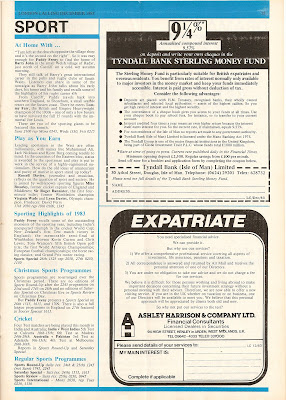 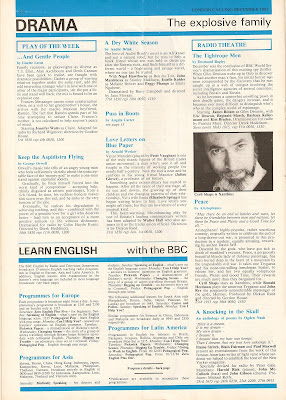 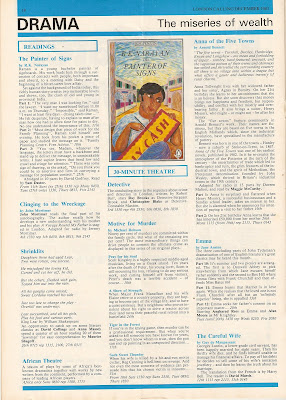 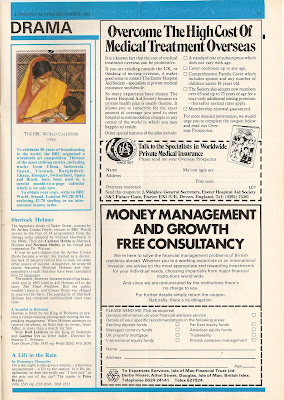 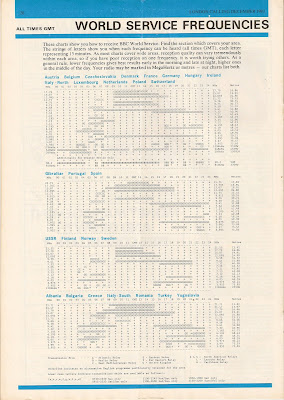 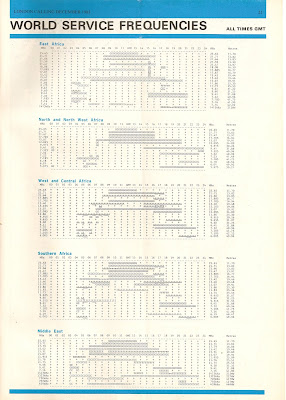 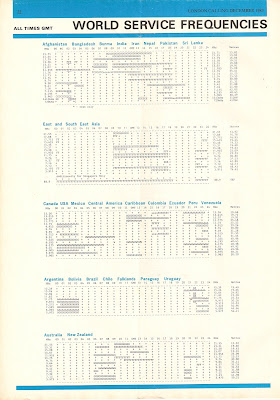 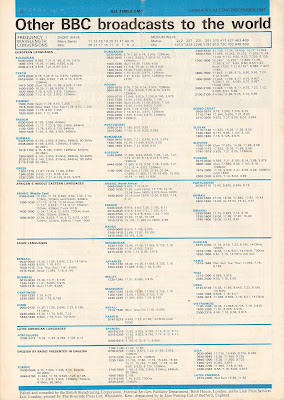 I had this issue of London Calling! I began enjoying the World Service and all it had to offer, via shortwave of course, in September of 1983 as a 17-year old in Pennsylvania outside Philadelphia and tuned in several times a day routinely for many years after that, often falling asleep late at night to the whispers of Auntie Beeb and her charicteristically British voice/perspective from the radio at my bedside. Letter from American and many of the programs/personalities you mention soon became favorites. Haven't thought of Gordon Clyde in years. Very sad that what the World Service once was began to erode in the late 90s and early 2000s as funding cuts took effect and priorities shifted. The rolling news format and restricted nature of the programming now cannot compare. The last straw was when direct SW broadcasts to North America, via the Caribbean Relay Station on Antigua, ceased during Summer 2001. BBC Radio 4 online comes close at times, but it's not quite the same thing.

I am reminded by Commentary in "At a glance" that a senior member of WS current affairs had to listen to The World Tonight and then a call the one overnight person to alert them of anything they should be looking at, and also to ok the 2309 Commentary tape to be broadcast. If events superceded there was always a backup. I remember overhearing a call about 20 months before that which was rather more lively due to the events in the South Atlantic I don't think one person finished overnight alone.

The World Service really did have a great mix of programmes back then.
It's a shame that it mainly focuses on just news now, rather than the other aspects of life.
There are still some programmes that are other speech, but music has gone completely.

I remember in the early 1990s when the BBC newsreader Keith Bosley, also a poet and translator of note, read highlights from the Finnish folk epic The Kalevala, having earlier translated it in 1989 for the World's Classics imprint of Oxford University Press. While living with my parents in late 1985 in Gerrards Cross, Bucks., I was in the upstairs bathtub when Bosley announced a segment in which the critic George Steiner gave a talk, first run in May of that year, inspired by the 100th anniversary of the death of the French writer Victor Hugo. I left the tub for a moment to put a cassette in my boombox to record the talk, which ended with Bosley saying, "that tribute to Victor Hugo was by George Steiner." Then there was the classical music critic Edward Greenfield, who c 1999 read my request that he play the Austrian operetta singer Richard Tauber singing, from Paganini by Franz Lehar, Lehar's "Girls were made to love and kiss/And who am I to interfere with this?", which I had seen Tom Conti play on an old phonograph as the title character Norman in The Norman Conquests. So many memories of the World Service - the top of the hour news theme from Purcell's "Lillibullero". Alastair Cooke with Letter from America, which ran for c 58 years. Thanks for the memories, Auntie.

"You could also learn English through the lyrics of pop songs in the frankly bizarre Pedagogical Pop. Sadly there are few examples of the programme floating around the web but they're well worth a listen."
They are definitely worth a listen, but sadly I can only find one "Blue Suede Shoes" on youtube. If you could post a link to any others you know of, I would be extremely grateful. (I 'd love to hear again their treatment of "Heard it through the grapevine", which I remember as being hilarious.

I've got the following recorded from the radio in a cassette and then connverted to mp3: