This is London - World Service Memories 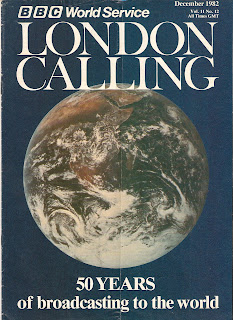 When did I first ‘discover’ the BBC World Service? Perhaps it was sneaky listen in the wee small hours when you could hear it on 1500m long wave or 276m medium wave. Quite why I was listening to the radio at 4 or 5 a.m. when I’d have school in the morning I don’t know!

At the time the long wave transmissions lasted just an hour or two whilst Radio 2 was off the air. The medium wave service was carried for most of the day and was really aimed at Western Europe and not a UK audience. Reception varied according to the time of day and the seasons.

What do I remember? Well Lillibullero before the news of course. Radio Newsreel with a theme that must have been used since the war (which indeed I later found out it was). Radio 1 DJs popped up too – John Peel, DLT on A Jolly Good Show (what a jolly British title) and Paul Burnett with the Top Twenty. Saturday Special with Paddy Feeney. Highlights of Radio 4’s Week Ending but retitled Two Cheers for… whatever year or month the clips were from. The film series Take One. Drama productions, often a repeat of something from Radio 4 but original stuff too, seemingly always directed by Gordon House.


Regrettably I committed virtually none of the above to tape, so no audio goldmine here. Nonetheless in this post I’m presenting some snippets that I did record between 1979 and 1982 presented in four montages.

The World Service is back in the news at the moment. The BBC has announced that more language services will close and that up to 650 jobs will go. And the old medium wave transmissions cease from the end of this March too. On 648 kHz (463m) since November 1978 the closure is perhaps understandable when the World Service is available on the internet and digital channels, though vast areas of the globe still rely on short wave signals or local FM. But clicking on the Listen Live button on a web page just isn’t the same as tuning your radio dial to catch a crackly fading signal, is it?

This first montage from 1980 includes part of the World News read by Pamela Creighton, News About Britain with Peter Lewis, Take One, Radio Newsreel, 24 Hours with Alexander MacLeod, Outlook with John Tidmarsh and New Ideas presented by Sarah Mills and Casey Lord

From 1982 Waveguide with Brian Ashen, English by Radio, Discovery with Tony Durham, A Jolly Good Show with Dave Lee Travis, The World News read by Michael Ashbee and Reflections with Olga Franklin 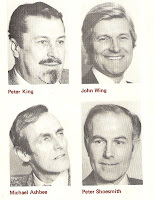 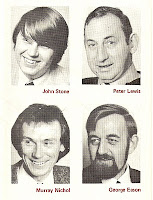 If you have ever wondered why the BBC World Service had silent pauses between programmes, it was so the engineers could switch antennas or change frequency on the transmitters.

Being on Short Wave you have to change frequency during the day to serve the different countries.

These changes used to be done manually, but eventually in the 1980's I believe some of the overseas stations where automated back to UK.

The World service always fascinated me and I must admit to catching the odd programme over the years on it - I know at one point they were repeating comedy shows like Dad's army on it as late as the late 80s / early 90s. you could frequently catch the odd music show too, broadcast in the small hours and generally lasting for half an hour.

Thankyou so much, With the move of World service today I was feeling nostalgic and decided to google 'Wave guide Brian Ashen' Brian was my Godfather and it was so nice to hear his voice again after all these years since his death.

Hello, I am doing a project on the World Service for university and am making a small book of memoirs in order to persuade people to keep it running. I wondered if you'd be able to give me a short paragraph I could quote and include in my book. Maybe just a mention of when you first heard it, key things you remember, why it's important to you, etc etc.

Thanks so much for posting these pictures and audio clips. It brought back many fond memories of listening to World Service in the 80's.

If anyone is interested, I have a copy of a joke / mash-up tape which "escaped" from Bush House circa 1970.
You can find it here:
http://www.campaignforindependentbroadcasting.co.uk/radio-station-archive/
Follow the download instructions near the top of the page.

Thank you for posting these clips. I worked in Belgium during the early 1980s, and despite being an American (i.e. many cultural and political references were not understood), I enjoyed listening to the BBC World Service on mediumwave and shortwave. As I suffered from a bit of insomnia at the time, there was nothing like a long list of sports match scores or the nautical (tide) reports to help lull me to sleep!

Well, that certainly brought back some memories. I'm glad that I left WS before it moved to Broadcasting House. Thanks for the post.

Brian - if you do revisit this page please email me as I'd love to speak to you about your time at the BBC. Andy

Loved listening to these old jingles and announcers. I recognized many of both from when I listened numerous times daily from the early 1980s to June 2001 when the WS stopped broadcasting to North America, and it even became difficult to hear African broadcasts on shortwave. Something was sadly lost when the decisions were made to go to the rolling news format, jettison much cultural programming, and move away from a distinctly British flavor. Listening online, while convenient, simply isn't the same.

Thank you, this is lovely! I'm wondering if someone could help me with a program that was on World Service during the 1980's. It has a female presenter & was a music program but with lots of interviews.
I remember one edition that had a great interview with Psychic TV - not even John Peel had them on! It's been really bugging me. Thank you for your labour of love:)

This brings back so many memories. I was living in Riyadh Saudi Arabia between 1985 and 1991. In those pre Internet days the WS was the only means of receiving news from Britain.Newspapers from UK were a day late and heavily censored. I managed to obtain a good shortwave radio and put a long wire antenna on the roof of the apartment block so reception was pretty good.I listened to it every day and into the night. Particular memories were hearing about the 1987 hurricane and the August invasion of Kuwait in 1990. Patrick Nairne

Awesome post thank you so much! I grew up in 70s and 80s listening to BBC WS in South India. Thanks to Web memories are relived. Especially news broadcaster's voice. I distinctly remember Roger Collinge final "Sports Round up" announcing he shall be retiring. Paddy Feeny Saturday Sports special, 1900-2300 Hrs Indian time, was another event to connect.

Thank you very much for posting this. Im trying to find more stuff about the brilliant sports commentator paddy feeney

Thanks very much for providing these snippets. Great to hear them again, gives you a real flavour of how the World Service used to sound. I often used to listen to the BBC WS in the 1980s when I was a teen. I found it fascinating. It was like a parallel universe alongside the commercial local stations, Radio 1 etc. The RP accents, the deliberate pronunciation, the sedate format, the Big Ben clock chimes, all the retro style programme music themes. I suppose it was, seeing as how they operated independently of the main part of the BBC, funded separately by the Foreign Office and operating at Bush House rather than Broadcasting House.

Wish we could have some of that style back again. Times change and not all of it would be appropriate now, but it had a distinctive theme and style which now seems to have been lost. I don't even know what the BBC World Service news theme sounds like. All I know is they have that Scottish woman every hour telling us it's "The BBC Waireld Sairvice, the world's radio station". RP has gone out of the window, due to PC.

Thank you for posting these snippets. I'm the granddaughter of Barry Moss - he passed away 11 years ago, and I love the fact his voice is captured online. When his great granddaughter (my brother's daughter) is older, I hope to sit down with her and show her his achievements.

Oh, the BBC kept me company for so many years on the SW. Correcting my timepieces and listening the news as spoken from Pamela Creighton who was my favourite. SW radio cannot be compared to the internet. Radio reception is incomparable. You can lay in bed, and close your eyes and listen, just listen. Or on the beach in summer. Internet requires eyes wide open, eye strain and of course some cost. Where have all those voices gone...long time passing.

Hello, what's your name? He was my great uncle, I'd love to meet you. You can find me on Facebook - Louie Ablett

Hi Louie, my name is Adam North Brian's Godson I think I've found you on Facebook.

There was a news reader, Nicola Davis but no reports seem available

I've been trying to find this out too! She was one my few sources of alternative music while I lived in southern Africa in the late 80s/early 90s.

I believe the presenter was Janice Long, but I'm not 100% sure.