Radio 1 Roadshow - On the Road 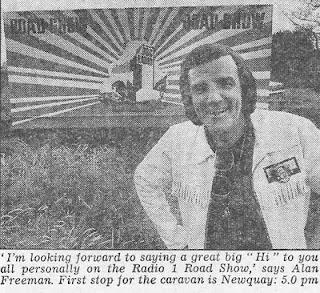 The kids are off school, the sun is out (!) so let’s head to the coast for the Radio 1 Roadshow.

A trip to the seaside to watch your favourite DJ was, for nearly thirty years, a regular summer event. That and maybe seeing a performance from a minor pop sensation of the day and a BBC OB crew wearing shorts and polo shirts, regardless of the weather, to a man.

The idea for the roadshows came from Executive Producer, later Network Controller, Johnny Beerling. Here he recalls a family holiday in the south of France:

While there I noticed the site on which we were staying had been taken over for a day by a sponsor who was staging all kinds of sporting and boule activities. In the evening a mobile stage was set up and as dusk approached people strolled towards it carrying their aluminium chairs. Being a nosey sort of bloke I wanted to see what was going on. There was to be an audience participation show, which turned out to be staged under the auspices of Radio Monte Carlo.

There were a couple of big trucks and a stage in front of one of them. I watched with a professional interest as the evening wore on and we were treated to a sort of cross between a small scale Sunday Night at the London Palladium with cabaret acts and live musicians interspersed with all kinds of audience participation games. I found out that the show was recorded and edited for subsequent transmission on Radio Monte Carlo.

Back in the UK Johnny had to find his roadshow vehicle and through BBC Bristol producer Brain Patten came to meet the manager of Adge Cutler and the Wurzels who had a van he used for staging the band at country fairs. The manager was John Miles who, with his brother Tony aka “Smiley Miley”, would provide the roadshow trucks and “Goodie Mobiles” for many years.

The first Radio 1 Road Show aired on Monday 23 July 1973 and was presented by Alan Freeman. Initially it was seen as a summer substitute for the long-running Radio 1 Club and so went out in the same late afternoon timeslot (see Radio Times left). It wasn’t until the 1975 series that it was moved to the late morning slot it occupied until the end of its run in 1999.

A set of bespoke Roadshow jingles was commissioned from Studio G rather than PAMS in Dallas who Radio 1 was using at the time; jingles used to great effect in the programme trailers and opening. Soon features such as Bits and Pieces and the Smiley Miley Mileage Game became summer regulars.

So let’s go back to the Roadshow’s 10th season and hear part of a Mike Read programme from The Promenade, Ilfracombe. The producer is Johnny Beerling. The date Wednesday 21 July 1982. In typical Mike fashion within minutes out comes the guitar as he goes into a Cliff Richard impression.

I’ll be posting more about the Roadshow including video of a programme from the early 90s but if you have any audio that you’d like to share please contact me.

Quote from Radio1 - The Inside Scene, Johnny Beerling, Trafford Publishing, 2008
Posted by Andy Walmsley at 02:00

I recall going to two Radio 1 roadshows in the 1970's on of the regular ones on Plymouth Hoe in about 1974 I think whilst I was on holiday there.

The other was as part of a saloon car racing meeting at Mallory Park. It was when Noel Edmunds used to race. And the Radio 1 road show was there as well.

Used to love listening to these on Radio 1 in summer hols as a kid. Always wanted to go to one in person but never got there ;~(

I also went to Mallory Park and still have the programme I bought. It was Paul Burnet 19 till 1 and David Hamilton 3 till 5 so not a Roadshow in the strict sense of the word. Saw the later Bournemouth roadshows( Danni Minogue was on one) which bore little resermblence to the eraly ones. I also saw Simon Bates and another year , Paul Burnet broadcast from the smaller stage at The Royal Show..........how times have changed!!