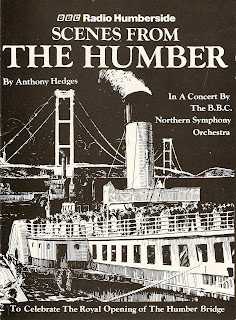 It was 30 years ago today that the Queen officially opened the Humber Bridge. That morning many of us went down to Brough station to watch the Royal train passing by, though we didn’t get to see the Royal party as it sped through. In the evening Val and I attended a concert at Hull City Hall and then wandered down to the Humber to watch a spectacular firework display.

As I used to live in Brough, a settlement that the Romans called Petuaria, here’s that first movement played by the BBC Northern Symphony Orchestra conducted by Günther Herbig. The announcer, from the BBC’s Manchester studios, is Michael Scott.
Petuaria Patrol
Though the Queen cut the ribbon on 18 July the bridge had been open to traffic from 24 June. Here’s how BBC Radio Humberside reported that opening. Providing the commentary are Robin Pulford and Barry Stockdale. The Song of Humberside is sung by Chris Rowe.
Opening of the Humber Bridge

More on the Humber Bridge  here.