Roger Eckersley and All That 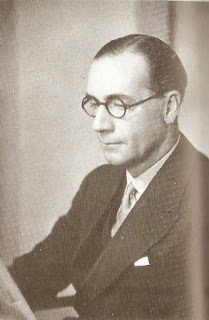 In the history of the BBC there are two members of the same family that figure in its early development. One of them was flamboyant chief engineer Peter Eckersley who’d started the experimental pre-BBC “Two Emma Toc” broadcasts from Writtle in a “spirit of farce and foolishness”. After eight years at the BBC he was forced to leave following an affair and subsequent divorce, thereafter working for Leonard Plugge’s IBC, MI6 and a period where his second wife Dolly was embroiled with Mosely’s British Union of Fascists and was instrumental in the Lord Haw-Haw broadcasts.

With a less colourful and much longer time at the BBC was his eldest brother Roger. (1) Details of Roger’s early life remain sketchy other than he was Charterhouse educated, failed at the law and had worked for the Foreign Office. By the time he’d been recruited to the BBC by his brother Peter in February 1924 (a case of nepotism that would send the current Minister at the DCMS into a frenzy) he’d had a spell as secretary of the Littlehampton Golf Club and a failed attempt to be a chicken farmer. Ideal BBC administrator material it seems.

Another string to his bow was as a composer with his best known composition being It’s Just the Time for Dancing (2), the opening theme used by Henry Hall’s band that was, rather neatly, the first piece of music heard from the newly opened Broadcasting House in March 1932.

During his tenure at the BBC Eckersley was instrumental in some of the decisions that set the template for British radio broadcasting. When the General Strike was bringing the country to a halt he’d argued for the creation of a news team rather than exclusively rely on the news agency reports; he was part of the Pronunciation Committee alongside playwright George Bernard Shaw and poet Robert Bridges; he held protracted negotiations with Sir Thomas Beecham on the formation of a permanent orchestra for the corporation (this was to be the BBC Symphony Orchestra under the direction of Adrian Boult following Beecham’s withdrawal) and he helped persuade the theatre owners  and entertainment agencies to let their artistes  appear on the radio. On the other hand, showing something of a detachment from the majority of listeners, he did express the view that broadcasting should cease between 7 and 8 pm because everyone would be dressing for dinner.

Eckersley was highly valued by Director-General John Reith. One of his contemporaries (speaking anonymously to Reith’s first biographer Andrew Boyle) said “he was a marvellously smooth operator in the field of social and public relations. He even taught Reith how to fasten a bow tie without turning a hair, and nobody resented his position as one of Reith’s favourites for several years. A select house at No. 21 Thurloe Square was leased, equipped, maintained and run at the expense of the BBC so that Roger could deploy his social graces officially and to the full.” Not all agreed with this practice; one of the BBC governors, Mrs Ethel Snowden, was of the opinion that “our employees should not be exposed to the danger of constant entertainment of people of artistic temperament.”

The early development of the BBC had seen the growth of regional broadcasting – partly out of a necessity due to the limitations of technology and transmitters. Chief engineer Peter Eckersley was particularly keen on developing this service to ensure that listeners could enjoy alternative programmes to the main radio station. Conversely his brother Roger was a proponent of greater centralisation, which is indeed what happened in the 1930s, and he was more metropolitan in his outlook. He wrote:”More has been made of civic pride and amour proper than has been necessary.” In a memorandum to station directors of November 1928 he argued: “Take from London what you cannot do better yourself, and do yourself what London cannot give you.”

In the view of David Cleghorn Thomson (Scottish Regional Director), Roger was “the greatest enemy of regional initiative and independence, and an enthusiast for just the bloated centripetal ‘mugwumpery’ that his brother feared.” Despite this, or maybe because of this, Eckersley became Director of Regional Relations in 1937 and Assistant Controller (Regions) the following year.

With the outbreak of World War II the National and Regional Programme were combined into one Home Service. Eckersley was put in charge of an American Liaison Unit and was therefore the man having overall responsibility for censoring American broadcasts, although he spent much of his time lobbying for greater access. That access included supporting Ed Murrow’s famous rooftop London After Dark broadcasts during the Blitz.

Eckersley retired from the BBC in 1945 and the following year wrote about his time with the Corporation in The BBC and All That. (3) For the BBC’s 90th anniversary extracts from this book were abridged by Neil Cargill and read by James Fleet.

Broadcast on 23 November 2012, in the first programme we hear of the rapid expansion of the BBC, why the performers in radio drama should remain anonymous and how to pronounce acoustics.

In the second programme, from 30 November 2012, we take a tour of Broadcasting House, hear about audience research and how not to address the Queen.

(1) There was also a third middle brother Tom who was also partly involved in radio as a research engineer at Marconi.

(2) Other tunes he wrote include The One in the World, Blue Lagoon, Pigtail Alley, Sentimental Moon, Just a Voice, Lake Isle of Innisfree, Deep Depression over Iceland Blues, Shopping, Three Encore Songs and a couple of two-step pieces Fire Flies and Gnats.

(3) Published by Sampson, Low, Marston & Co Ltd in 1946. I’ve been unable to source a reasonably priced copy so if you happen to have this book and are willing to sell it (for a reasonable price!) please contact me. The following year Eckersley published a book of humorous verses titled Some Nonsense. With rhymes like “She reads him naughty bit from Byron. That stimulating little siren. She says there’s something mute in him. And longs to rouse the brute in him,” it is perhaps best avoided.