Down Your Local - 50 Years of BBC Radio Derby

Fifty years ago today, at 5.50 pm, the last of the BBC's second tranche of local stations, Radio Derby, came on air.

Broadcasting from the studios at 56 St Helen's Street (and by my reckoning the only one of the original stations still to be in the same building five decades later) like all the BBC local stations it was initially heard on VHF only (on 96.5 MHz), transmitting from Sutton Coldfield some 25 miles away. Medium wave reception on 269 metres (1115 kHz) became possible a couple of years later when the site at Burnaston Lane was opened, by which time a VHF/FM relay was also in use on 94.2 MHz. 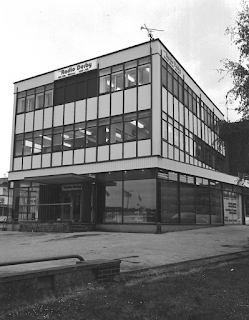 In common with a number of the other local stations, Radio Derby had made an impromptu appearance before the official launch date. In this case it wasn't weather related but was for the breaking story, in late February, of the bankruptcy of Rolls-Royce, a major employer in the town.

The station's first manager was an old BBC hand. George Sigsworth had worked for the corporation since the 1950s and was the Midland's Home Service agricultural correspondent producing programmes such as Farming Today and, in the late 60s, In Your Garden. He was succeeded in the post by John Bright. George's deputy was the Programme Organiser Roger Matthews (ex-Radio Leicester). The station's first news editor was Barrie Eccleston a news agency journalist who'd provided the news for Radio Leicester from Roly Orton's agency. Barrie also worked as a football commentator and reporter at a time when Derby County was riding under Brian Clough and then Dave Mackay. 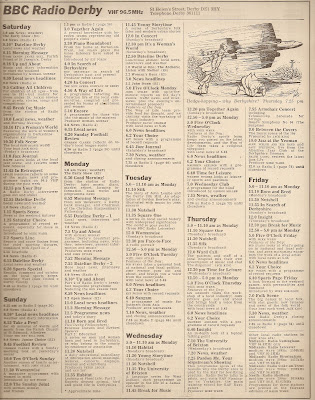 The earliest Radio Times with Radio Derby listings that I have comes from the week of 18 November 1972. It's the usual mix of weekday shows concentrated around the key times of breakfast, lunchtime and teatime/drivetime with Radio 2 and Radio 4 output acting as a sustaining service in between. Weekends offer more specialist shows, sports coverage and, like virtually every other local station at the time, a Saturday mornings kids show. Derby's breakfast show Up and About was presented by a rota of the presenters, this particular week by Michael Murray, a former Home Service announcer who'd been part of the launch team at Radio Leicester in 1967. His voice had opened Radio Derby. The local news bulletins were given the somewhat Americanised title of Dateline Derby. The teatime show is Five O'Clock Monday etc. but a year or so later that too got the 'dateline' treatment with Dateline Monday and so on.

Other presenters included Mike Warr (who a decade later would be the station manager when Radio Jersey launched), John Stiles (a former station assistant at Radio Stoke who opened Radio Derby in 1971.  He stayed with the station until the early 1990s), Kit Poxon (ex-Radio Nottingham who'd go on to present the Down Your Way type show Kit at Large), David Graham, Jack King, Maureen Axelrod, Leslie Robinson, Ralph Laing and sports presenter Graham Clarke. Producing the educational programmes including the daily 5-minutes Nutshell are Peter Legge and Ann Toy. 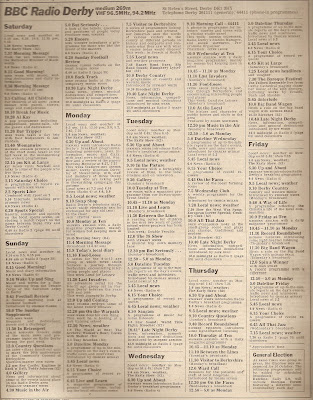 Moving on a couple of years to this schedule for the week commencing 28 September 1974 which includes the name Stewart White, who'll be immediately familiar to viewers of BBC One's Look East which he's presented for the last four decades. Listed here as the presenter of Up and About, Derby Country and The 78 Show he'd joined from Radio Brighton. Stewart would move over to BRMB before joining ATV (later Central) and then back to the BBC in 1984. On a couple of separate occasions he's also presented a Saturday morning show on Radio Norfolk.

Another very familiar radio name is that of football commentator Mike Ingham. Growing up in Belper he'd joined Radio Derby as a station assistant in 1973 after gaining some hospital radio experience in Birmingham. Initially presenting music shows, in this week Back Track and Up and Coming, he switched to sports presenting following the death of Graham Clarke.  Mike moved down to London in 1979 to join the Radio Sport department where he presented Sport on 2, Sunday Sport and the Sports Desks before becoming a match commentator and later the football correspondent. He retired in 2014. You can hear Mike speaking to Radio Derby's Andy Twigge on the BBC website here.

With the local cinema news In the Picture is, I'm guessing, the same Ian Christie who went on to be a renowned film historian (at the BFI and now Professor of Film and Media History at Birkbeck, University of London). In 1969 he'd got a job teaching at the Derby College of Art where he established one of the country's first film studies courses.

Unusually for many of the BBC local station's at this time Derby had an evening show Late Night Derby originally introduced the previous year to provide some late-night company during the power cuts when the television service was forced to closedown at 10.30 pm. 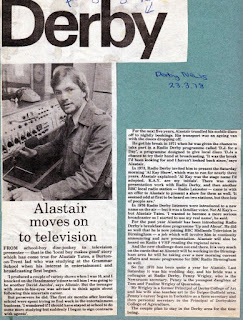 Presenting a Saturday morning pop show is Al Kay, the name that Alastair Yates had adopted at the time. Alastair was running a mobile disco when he got the chance to try out radio broadcasting when Radio Derby held a DJ for a Day contest in 1971. He joined the stations two years later eventually using his real name when he was offered some speech shows including a time on Up and About. He moved to Pebble Mill in 1978 to work at Radio Birmingham, Midlands Today and read the regional news on the Radio 4 VHF opt-out. TV news work followed at Grampian, Anglia and the newly launched Sky News before long stints at BBC World and BBC News 24. He retired in 2011 and died suddenly in 2018.
Other Derby presenters in the 1970s/early 80s included John Burton, Simon Shaw, Paul Baird, Arthur Coyne (jazz shows), Canon Noel Vincent (later a religious programmes producer for BBC radio and TV), Norman Innes, Richard Else, Richard Sykes, Chris Baird (ex-Radio Trent and one of Derby's longest-serving presenters until the mid-2000s), Tommy Owen (The 78 Show), Peter Gore, Nigel Dean, Dave Fern , Neil Everton (also the news editor for a time), Rodney Malcolm, Mike Robinson, Yvonne Guy,  Glen Wright (long-time presenter of Black Roots), Richard Dallyn (later IRN Political Correspondent, Radio 5 live and LBC) and Satvinder Rana (one of the original presenters of Aaj-Kal when it started in September 1981 and still on air today).
Amongst the news reporters in the 70s were Bob Egginton (later heading up the BBC's GNS and launching BBC News Online in 1997), Nigel Kay (later the Corporation's Head of Journalism Development) and Paul Leighton (later a general presenter before joining Radio 4 and then Radio 2 as a continuity announcer and newsreader).
One of Radio Derby's most unexpected appointments was Terry Christian, some eight years before The Word came along. Christian presented the early evening music show Barbed Wireless between 1982 and 1988 picking up two Sony Awards on the way. The BBC Handbook described the show as mixing "music with information about jobs, alternatives to work and suggestions about the sort of things that can constructively fill otherwise empty days". Terry moved back to Manchester to Key 103 and on to television from 1990. Audio from a 1988 edition of the show is on Mixcloud. 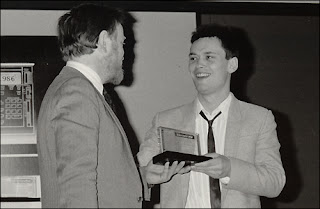 One of the Barbed Wireless team was Kevin Fernihough who also presented the show when Christian was on leave. Fern moved up to Radio Cumbria for the first of three spells at the station, in- between appearing on Radio Stoke (twice), Signal Radio and Century 106. Also on Barbed Wireless was Devon Daley who years later would produce Trevor Nelson's shows for Radio 1 and 1Xtra and has presented A Touch of Soul (2007-20) and currently DJ Delights across the East Midlands.

Jumping forward to the week commencing 11 January 1992 where Ian Skelly is the weekday breakfast show host. Ian started with the BBC in 1984 initially at BBC WM before moving to Radio Shropshire and then Derby but is best known as a Radio 3 presenter (Essential Classics and now Afternoon Concert).

On mid-mornings is the late Graham Knight (14 years with the station, ex-Radio Trent and host of Radio 2's weekend early show 1987-91). Another former Radio 2 early show presenter was David Yarnall (ex-Beacon, Mercia Sound and Radio Stoke) here presenting the Saturday morning breakfast show. On weekdays after lunch with Paul McKenzie the station was still taking Dennis McCarthy's Afternoon Special, something it had been simulcasting since 1980.

Amongst the specialist music shows is Folkwaves, a folk music show that ran from 1985 until it was axed in December 2010. The longest serving presenter was Mick Peat (who died in January of this year) alongside Bob Hazelwood, Barry Coope and finally Lester Simpson. 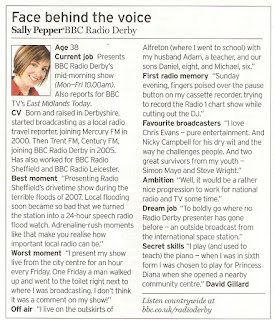 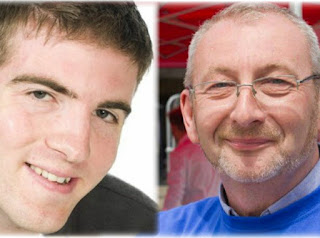 Special mention must, of course, go to two Radio Derby broadcasters who have sadly died in the last few years. In January 2017 Andy Potter, who been with the station since 1999, announced that he had terminal cancer. A blue plaque was placed on the studio building in January 2018. 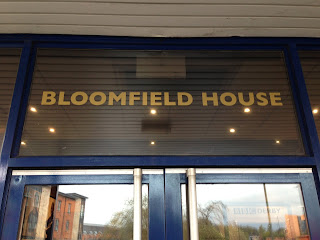 Colin Bloomfield spent 10 years at the station. Suffering from skin cancer in February 2015 he initiated the Colin Bloomfield Melanoma Appeal which went on to raise over £150,000. Colin passed away just three months later aged just 33. In April 2016 the studio complex at St Helen's Street was named Bloomfield House in his honour.
Posted by Andy Walmsley at 07:05 1 comment: