Steve Wright in the Afternoon 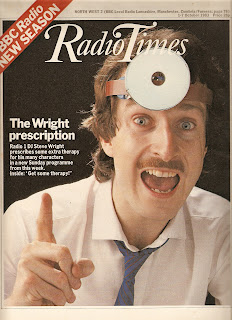 The standing joke is that his last name is Afternoon such is his long tenure on national radio in the mid-afternoon. A large percentage of listeners won’t be able to recall a time when Steve Wright wasn’t on in the afternoon as he’s made that his radio home for 35 of the last 40 years.

But all that is about to come to end this coming week as Wrighty steps down (or is gently pushed depending on how you read it) from BBC Radio 2’s afternoon show and Scott Mills finally makes a permanent move over to Wogan House.

In this blog post I’m posting a selection of Steve’s shows on Radio 1 and Radio 2 from the last four decades.


Steve’s radio career is well documented so I won’t go into too much detail. After a number of jobs from telephone engineer, insurance agent and club singer he moved into journalism on a local paper and then at LBC. His first broadcasts were on the Belgium-based pirate station Radio Atlantis (do any recordings exist?). In 1976 Steve joined Radio 210 at its launch with some pun-laden programme titles such as Wright On and, in partnership with Mike Read, The Read and Wright Show. See the Radio 210 website for more on this.

In 1979 it was off to Luxembourg for a brief spell on 208. Some audio of his time is on this Luxy website.

By January 1980 Steve had been signed up by the BBC and took over the Saturday night slot from Peter Powell. He presented his first Top of the Pops a month later. Moving to Saturday mornings later that year he picked numerous holiday cover shifts, including the breakfast show, before berthing in the afternoon show slot, then 1530-1700, on 5 October 1981 where he stayed for the next 12 years.This was the era of ‘The Afternoon Boys’(later ‘the posse’), “I’m all right, you all right?”, “Get some therapy”, True Stories and the Celebrity Trivia Quiz. Characters such as Damian the Social Worker, Sid the Manager (“hello boy!), Gervais the Hairdresser and Mr Angry from Purley (the voice of TO Dave Wernham who also played Dave Doubledecks) would pop into the studio or be on the phone. Steve was instrumental in bringing the zoo format to British radio. Frequent visits to the States provided much of the inspiration with the likes of Scott Shannon and the Morning Zoo on Z100 and The Greaseman on WWDC.

From the summer of 1982 Steve was part of the Radio 1 Roadshow and this is the first 25 minutes of his show from Morecambe on 5 August. There’s chance for you to have a go at Bits ‘n’ Pieces.

Here’s part of the afternoon show from Monday 2 May 1983. It’s a Bank Holiday so we get the show in super stereo on VHF (Radio 1 ‘borrowing’ Radio 2 FM frequencies for the afternoon) but we don’t get many of the regular features. There’s some Showbiz Gossip, a stupidly simple Celebrity Trivia Quiz and Tommy Vance advertising the virtues of Stench. And if you thought that Steve’s habit of  singing over the end of a record is a recent trait you’ll realise he’s been doing it for decades.

Although this next recording from 18 February 1985 lasts only 16 minutes we get bags of characters and catchphrases plus an extra dose of Mezzoforte’s Surprise into the Showbiz Gossip.

Another Bank Holiday show on FM, this time Easter Monday 8 April 1985 as Gary Davies hands over to Wrighty. It’s  a heavily edited recording but listen out for Mr Angry, Laura’s Second Love, Where in the World?, a non PC The Boss (“yes Sir, Mr Wright”), loads of Ruth McCrum (“You’re listening to Steve Wright, the guy who has the perfect body for radio”) and Andy Peebles trailing the charity football match of Radio 1 vs BBC Radio Sheffield. By now the show template and the production values that made the show sound ‘big’ and that would endure for the next four decades is set. Canned applause, themes and music beds, custom jingles (by AJ Productions), interruptions from characters, portentous announcements (here voiced by Simon Bates), lots of teasers, bags of features and repeating the news headlines even though they’ve been on the last bulletin. The music is almost secondary, Steve hardly ever introduces or back annos a track.

Early on in this sequence of recordings from Radio 1’s big FM switch-on on 1 September 1988 is about 20 minutes of Wright. Listen out for Sid the Manager, Adam West and John Bole (voiced by Peter Dickson, part of the Steve Wright repertory company at that time along with Phil Cornwell and Gavin MCoy) sounding not unlike political correspondent John Cole.

Forward on to 1991 for this recording from 1 July of another afternoon show “extending the boundaries of radio”. We hear the end of Gary Davies’s lunchtime show before Steve. Keep an ear out for the Hopeless the Weather Girl and guest posse member Chris Eubank. The newsreader is Alistair Sandford.

The last Radio 1 afternoon show aired on 24 December 1993. In January 1994 he was at the helm of the breakfast show with some of the old posse who were now Richard Easter, Julie De Rohan, producer Mic Wilkoyc, production assistant Nicky Hack and Ione Brown “the new dynamic breakfast posse”. Regular characters included Voiceover Man Peter Dickson and The Newsagent (“scuse me”). In this recording from 25 March 1994 the features include Star Trek sketches and Amazing But True (that would become Factoids on Radio 2). On news reading duty is Peter Bowes.

Steve’s spell on Radio 1’s breakfast show was brief, just 15 months. He was unhappy with the changes at the station as part of Matthew Bannister’s new broom  and it seems that he was also not happy with the breakfast slot as it allowed him little show prep time during the day; the afternoon show gave him the time to prepare and do any pre-records etc. Plus there was a Saturday morning show on Talk Radio in the offing and he also acted as a consultant for the GWR Group, visiting the stations and offering encouragement and support to their staff.

In March 1996 Steve was recruited back into the BBC fold by the new Radio 2 controller Jim Moir. He presented three shows: Sunday Love Songs (modelled on Gerald Harper’s old show Sunday Affair on Capital) , still running, of course, a Saturday morning show between 10 and 1 bearing a striking resemblance to his Talk Radio stuff and, at intervals in 1996, 1997 and 1998 Steve Wright at the Movies (later re-titled The Steve Wright Picture Show).

With Steve on the Saturday shows were the Talk Radio team of Richard and Georgey. There’s less mucking about on these shows, the main focus is on the guests. This recording dates from 4 April 1998 and in the studio with Steve is novelist Jackie Collins. By now Georgey has gone back up to Yorkshire TV and its Liza Tarbuck in the studio.

From later in 1998 the guests are Griff Rhys Jones, Dick Francis, Robin Gibb and on the phone Noel Edmonds, though sadly he gets cut off in his prime as my tape ran out.  Liza is off on her holidays. The newsreader is Colin Berry. Recorded on 5 September.

It was back to weekday afternoons from 5 July 1999 when Steve was moved to replace Ed Stewart. And he’s been there ever since. This is the era of the Big Quiz, the Non-Stop Oldies, the Old Woman, Factoids, Ask Elvis (my favourite feature) and Serious Jockin’ (with no g). Steve’s sidekicks are, no surprise here, Richard Easter and Janey Lee Grace, newly signed to the station from Virgin Radio. Before long Richard was off to Celador to write scripts for Who Want’s to Be a Millionaire? and in came Tim Smith. In this recording of the Big Show from 26 October 1999 the guests are journalist Matthew Parris and Shania Twain. Reading the news is Fran Godfrey, with the travel Pippa Sparkes and the sport Bob Ballard. As it did for many years the show ends with last chords of Wichita Lineman.

In January 1999 Steve was signed up to host a weekly show on the BBC World Service titled Wright Around the World. It replaced long-running popular shows A Jolly Good Show and Anything Goes. A mix of music, comedy, letters and dedications, a mystery voice, an entertainment quiz and a Pen Pal feature it ran until October 2003. This recording dates from around the 22 August 2002.

The final piece of audio, for the time being, is the afternoon show from 23 May 2008. With Steve is Tim Smith and his guests are Jack Bruce, Piers Morgan (sorry!) and Terry Wogan who previews the Eurovision Song Contest taking place the following day in Belgrade. You’ll also hear Sally Traffic, sports guy Jonny Saunders and Ricky Salmon reading the news. 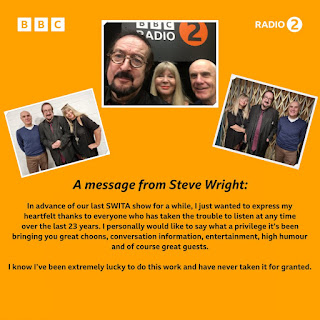 Before the final afternoon show Steve issued a statement (full text here) which tantalisingly dangles the carrot that this is "our last SWITA for a while." Will he be back? Here's that final Radio 2 show.