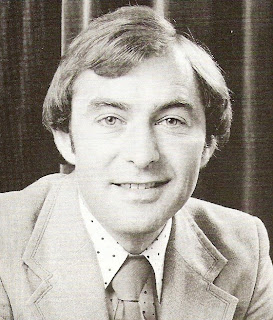 I'm taking the opportunity to post a little bit more about Ray Moore as further research has unearthed these two articles that I want to share with you.

Firstly back in June 1986 the Guardian’s TV critic Nancy Banks-Smith felt moved to write about radio rather than TV and penned this homage to Ray when The Early Show changed its start time.

I don’t think I shall bother to wake up at all this morning. For years I have been roused by the sound of Ray Moore coughing on Radio 2, like an early bird choking on a worm. It is a great comfort to his faithful if bedraggled following that he always sounds worse than we do.

All the ill-attended meetings of the Ray Moore Appreciation Society we all agree that he is the least well-known of all the well-known people in the history of the world. This is, of course, because he isn’t on TV. Some claim to have sighted him late at night dressed as a penguin, behind a potted palm and speaking highly of the paso doble but it seems unlikely. A leaked BBC memo states with a wince, “We have grave reservations about Ray Moore appearing on TV mainly arising from his face. As none of us has seen him we don’t know what this means and we’re not sure we want to know.

He inhabits by early light a Lowry-like landscape. Here in a knit and spit (apparently a seaside shelter) sit a cottage loaf woman and a man in cut-down wellies, their little legs dangling. In the Terminal Café, regulars are eating breakfast with nonchalant haste. In Oxford Circus is a whey-faced busker sitting on a stool, who can only play two tunes. One is Cavatina. The other isn’t.

Moore comes from a long line of wooden-legged greengrocers and short-sighted undertakers. His father used to take him to school in the hearse. Listeners sometimes (though not often) request a moving poem about Moore senior’s myopia, which he delivers in a monochrome chant.
My father had a rabbit
And he thought it was a duck
He put it on the table
With its legs cocked up

He claims to be related to Fletcher Christian, which gives you a faint frisson of sympathy for Charles Laughton. He is married to Management, referred to by Wogan as “a big Alma”. Consequently one imagines Moore as being exceptionally small.

Internal evidence like cries of “It’s Burt Bacharach, me old scouse mucker” lead one to suspect he may be Liverpudlian. He will sing you “Mersey Dock and Harbour Board” to the tune of Mersey doats and dozy doats if you’re not careful.

Like all Liverpudlians, he lives on the other side of a distorting mirror where nude ballooning is all the rage or if you don’t have the figure for it, single-handed round the world golf. Familiar buildings and singers emerge slightly askew as in the Royal Halibut Hall and Julio Double Glazing Arse. He seems to live in the plaintive hope of meeting Frank Sinatra, who never answers his letters.

Wogan called him a journeyman broadcaster, a jobbing jock. People used to set their alarms to catch the moment when those two programmes touched for a few fizzing minutes and Moore and Wogan went into their two-jocks-on-one-horse act. Wogan’s hole, so to speak, has never been filled. The head of Certain Things and Bits of Bent Wire at the BBC, as Moore puts it, has dropped Derek Jameson into Wogan’s hole today.

The splash of the displacement washes Ken Bruce forward, his psychedelic Scottish sweaters (“You could riddle bulldogs through them on a clear day”) disappearing dazzling into the distance. And it has washed Moore into the dark backward and abyss of time or 5.30 am if you insist, where he can be heard coughing in the dark like a Thurber seal.

There will be an extraordinary meeting of the Ray Moore Appreciation Society to discuss this at the Terminal Café. Big Alma in the chair, mixed gorilla on the menu, bring a fistful of wet change. And ‘phone Frank Sinatra.

And from The Independent dated 13 January 1989 here’s Richard North’s obituary for Ray. (Click image to view in full) 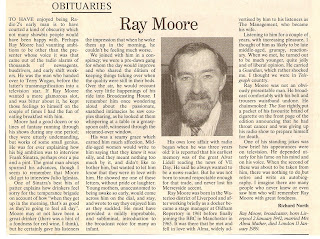 I was also reminded about the notes made by John Peel when he was drafting ideas for his autobiography, and reproduced as an appendix to Margrave of the Marshes. John wrote: " Trips to Eurovision Song Contests in Brussels-return to Heysel and hilarious meeting with King and Queen of Belgium in small party including the late Ray Moore leading to reflections on the really great broadcasters Moore, Lyttelton, Clayton, Arlott..."

Anyway time for a bit more audio. First another Monday Movie Quiz, this one from 7 March 1983 that follows the edition I've already posted. So if you were waiting for some answers to the last lot of film questions here you are:
 

A couple of years ago in January 2009 Colin Berry paid tribute to Ray on this BBC Three Counties show. He included some links from Ray's last Early Show on 28 January 1988. Apologies for the quality of this recording, it was made at a low bitrate from the iPlayer:

I loved reading all this about Ray Moore. Used to listen to him while getting ready for an early shift.... thank you so much for your blog!

God bless you for these posts . . I'm still not convinced I''m his one and only listener though! . . surely nobody is as daft or dafter than me. I used to walk to work on the early shift with my Sony Walkman to ensure I would gather as much daily garbage from Ray as possible . . Has nobody got a recording of him passing comment on Cyndi Lauper's "Like Ray Moore?"

Just listening to all the comments on Terry Wogan and how relaxed his presentation skills were which was true.I have to say however that I have wonderful memories of waking up to Ray Moore and his fantastic presentation skills the equal of Terry's.Ray was my introduction to Radio 2 in my earlier years and I have stuck with it ever since.A shame that the station has now adopted Chris to follow Terry.I don't listen to the breakfast shows any more.

I've just stumbled upon this blog referring to the lovely Ray Moore. I remember him well. I was a newsagent in the 1980's and used to creep around my shop "marking up the papers" early in the morning (my kids were asleep in their bedrooms above) while listening to Ray and smiling a lot. I sent him a birthday request, which he read out, for my mum and her best friend who were like two Molly Sugdens working as cleaners in the local doctors. They looked alike, had the same birthday, but were born 3 years apart - the strangest twins ever!
I'm now toasting him with a glass of Macon (flippin Mabel.
Thanks for the memories :)

Just stumbled upon this blog too. My job involved meeting people all over England, meaning very early starts and long drives. On many days, the salvation was listening to Ray. Almost to a point of obsession when getting up, I would do any necessary jobs making sure that when the music stopped I could listen to the continual stream of gems emitting from the radio. When it was time to leave home, I always made sure that during the short trip from front door to car there would be music; and the relief of making the car seat, turning on the engine and then the radio by the time Ray was talking again. Almost crazy, isn't it!