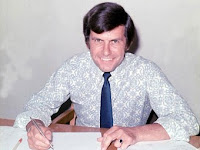 The sad news of the death of Bob Holness has been announced today. Bob was a regular radio broadcaster from the 60s through to the 90s and, of course, the host of Blockbusters.

Bob’s radio career started in his native South Africa, though the family had returned back to the UK just after his birth, with his first job being in 1955 as a radio actor. As trivia fans will know he played James Bond in an adaptation of Moonraker. He transferred into presentation and DJ work before moving back to Britain in 1961 where he joined Granada TV working of World In Action and hosting Junior Criss Cross Quiz. At the same time he was DJ'ing from the London studios of Radio Luxembourg.

By the mid-60s Bob was working on BBC radio.  On the Light Programme he popped up on Housewives’ Choice, Newly Pressed, Swingalong, Playtime and Roundabout. Over on the Home Service he was one of the presenters of the regional news programme South-East, working alongside Tim Gudgin and Paddy Feeny.

When Radio 1 and Radio 2 started in September 1967 Bob was on air in the first week as a regular host of the Late Night Extra, and he continued to work on the show until 1974.

Between 1975 and 1985 Bob was one half  of the famous LBC partnership with Douglas Cameron on the daily AM news magazine.  Originally at LBC on the afternoon Newswatch, Bob teamed up with Douglas following the departure of Clive Roslin. You can hear a tribute to Bob’s time on AM is this feature compiled by Geoff Lumley. Bob Holness Ten Years


It was during this time that Bob also became a teatime favourite on Central TV’s Blockbusters - “Can I have a P please Bob?” and the Blockbusters hand jive surely ensuring his place in TV history.  I posted a short clip of Blockbusters  on my You Tube channel last year.

Back on the radio Bob was heard every week on the BBC World Service with the request show Anything Goes that ran from the mid 70s to the late 90s, prior to that he also presented Date with a Disc. In 1985 he returned to the Radio 2 to front shows with the BBC Radio Orchestra and sitting in for holidaying DJs such as Desmond Carrington and Derek Jameson.
 

A touching tribute- thanks Andy. I remember listening to Bob on LBC's AM when I was at school, then enjoying the odd chat with the man a decade later when we both worked at Bush House- a genuinely lovely chap- RIP

Amazing what a long career Bob had. I didn't actually come across him until the 1980s when he debuted in Blockbusters. A true gentleman.

Loved him so much. Had so much fun listening to his 'anything goes'. I'm sure he is at peace wherever he is right now :)