Another Stroll Down Waggoners’ Walk

Time for another trip to Hampstead to meet the inhabitants of Waggoners’ Walk.

The daily series was first broadcast by BBC Radio 2 back in April 1969 as a replacement for long-running The Dales (formerly Mrs Dale’s Diary).  Although meant to be a bit more hip and happening than its predecessor, the Radio Times for that week, went to great lengths to assure listeners that the new serial’s setting was familiarly suburban.

Far from being a vast impersonal spread of urbanisation the greater part of London is still divided into hundreds of separate communities which, despite the fact that they are so closely crowded by their neighbours, preserve an atmosphere which is as individual as that of a country village. Many of them indeed were villages-as some of the older buildings and the eccentric street plans testify so eloquently. Some have retained enough of their old character to have become tourist attractions in their own right. But the majority are not quite so picturesque, and their atmosphere is only appreciated by those who live there. 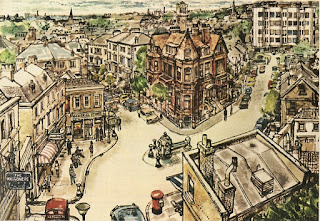 One of the latter is Waggoners’ Walk. (You won’t find it on any street map.) It’s small as communities go-really only the cul-de-sac which is the Walk itself, and one or two hundred yards in each direction along the road which crosses the entrance to the Walk, in an unplanned sort of way. Beyond these very strict limits-well, one is simply somewhere else, even if the street signs and postal authorities don’t cater for such subtle distinctions.

There have been a good many changes since the eighteenth century, when the sturdy man who gave the Walk its name used to pause on their journey uphill towards Hampstead to fresh their horses at the trough, and themselves at the inn-to which also they gave their name. The inn is now the oub, and has been modernised. Architects in the nineteenth and twentieth centutries have added variety to the Georgian terraces, each according to his own vision and resources. Social revolution has turned the biggest houses into small flats for the young and lowly paid, and the old mews cottages into luxury flats for the very wealthy. In these things, the Walk has much in common with its neighbours. Perhaps, after all, it is not the buildings but the people who live in them, that give an area its particular character.

The article’s writer Richard Imison  goes on to describe the residents of the Walk:

As in most areas of this kind, the inhabitants are not all Londoners by birth. Many of them are really quite recent arrivals, coming from all parts of the country, for different reasons, to make their home near the centre of the city. This perhaps explains the attractive individuality of so small a community.

Perhaps it also explains why they find it difficult to give clear directions on how to get to the Walk itself. The new arrival may well lose himself on the way (even in the short walk from the station, for the roads are complicated) but once there he will soon find himself amongst friends.

In the same edition of the Radio Times producer Keith Williams introduces us to the characters that live in the flats in the corner house on Waggoners’ Walk. 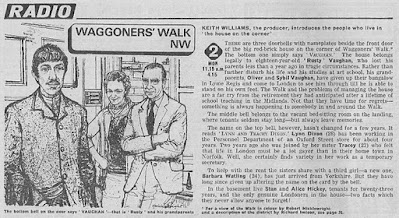 Waggoners’ Walk was dropped at fairly short notice as part of the financial cutbacks that the BBC had to make in 1980 – aiming to save £130m over two years. At the time actor Basil Moss, who played Peter Tyson, and others on the cast, were taken aback by the decision to axe the programme, claiming to have only heard of the decision on the radio news.

So from the last couple of weeks of the series here are four more episodes of ‘Waggs’ together with the last ever episode previously posted by me in November 2010.

Do you have any copies of Waggoners’ Walk? If so please contact me.

You can hear more about Mrs Dales' Diary in the Radio 4 programme I'm Rather Worried About Jim on Monday 16 January 2012.

Read more about the axing of Waggoners' Walk on 80s Actual

Andy - thank you so much! "Waggs" was required listening for me when I was a mere slip of a schoolboy and your latest post and 1980 episodes of the show are much appreciated. I have several 1970s episodes of the show - one, from around 1971, with Mike and Claire Nash awaiting the return of Mike's brother from abroad, another slightly later with Alice and Gordon Turner meeting the stars of Steptoe and Son, and a couple from 1978. But these are on cassette and I don't have the facilities to adapt them for upload. Anyway, thanks again. As with your 1981 Truckers' Hour, you've made the past live for me once more!

thanks so much for bringing back memories of life in Hampstead where I lived for a year (1973-74). I was a faithful Yankee devotee of Waggoners Walk. Wasn't there a different theme song in the early years of the show? The one I keep finding online doesn't sound like the one I remember. If I'm right, where can I find the earlier theme?

Hi Mary. To my knowledge there were three versons of the sig tune. The original you can hear on the extract of the first episode (I've now fixed this broken link). In the mid-70s it was replaced by the faster brass version until the show was axed. The Sunday omnibus version used a lighter version reminiscent of the first one.