With Sat Navs and phone apps there’s no shortage of realtime traffic data but many motorists still rely on the radio. In this post we’ll take a leisurely drive (although in reverse gear!) through the history of national radio traffic bulletins.

Last year on the R2OK Forum the question was posed about traffic news on Radio 2 – when did they start and have they always been on the network? The consensus of other posters, myself included, was that they always been on Radio 2 but that dedicated news reporters had only been on air since “Sally Traffic” joined in 1998.

Like me you’ll probably remember both the Radio 1 and Radio 2 DJs interrupting their shows to read out a traffic flash. Traffic bulletins are no longer heard on Radio 1, and haven’t been since some time in the late ‘90s I’m guessing (Dom’s One Road Travel aside). Here’s Newsbeat’s Carolyn Atkinson on Kevin Greening’s Breakfast Show in 1997:

Over on Radio 2 the voices of Sally Boazman, Lynn Bowles and Bobby Prior are as well known as the DJs.
 

It was back in 1998 when Johnnie Walker was due to take over Radio 2’s Drivetime slot from John Dunn that changes were made. In his autobiography Johnnie writes:

"One of the things I felt really needed changing was the travel news...we decided it would be a good idea to have a dedicated travel newsreader to collect and announce information twice an hour. Jude Howells, who had produced The AM Alternative with me on Radio Five, remembered how well I'd got along with Sally Boazman on GLR. We'd never actually met as Sally broadcast down the line from a studio in Scotland Yard. A meeting was set up and we hit it off straightaway"

And to prove the point here’s Johnnie, before he took over on Drivetime, sitting in the John Dunn in early 1998 reading the traffic news himself:

Whilst Johnnie was chatting to Sally in the evenings in the morning Wogan had his team of “underlings”. Newsreaders Alan Dedicoat, John Marsh and Fran Godfrey read the traffic bulletins and participated in a bit of light-hearted banter with the Togmeister. Here’s Fran with Terry in November 1999:


Throughout the 70s and 80s both Radio 1 and Radio 2 carried traffic flashes as and when there was a problem to report, and from about 1969 (two or three years later on Radio 2) used specially recorded jingles. Here’s a selection of those jingles, firstly from Radio 1:

And these from Radio 2:


Over on Radio 2 from the 1980s listen to Terry Wogan, David Hamilton and Ray Moore. 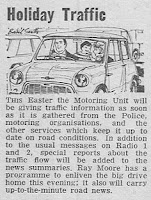 Traffic bulletins were certainly around in the late 60s, here’s Ray Moore on Breakfast Special in 1969.

The billing for Breakfast Special reads "with resident bands and singers of the week, discs, news, weather and traffic reports." Reports were read as and when they became available with no fixed bulletin times. For many years, of course, they relied solely on police and local authority reports into the BBC’s Motoring Unit so they consisted mainly of planned roadworks and major motorway incidents. 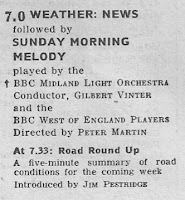 The reporting of known road closures can be traced back even further. From 1964 this Radio Times billing shows a regular Sunday five-minute Road Round-Up from Jim Pestridge. Jim would go on to produce and then present the long-running weekly magazine programme Motoring and the Motorist. Billed as “a weekly survey of the world of motoring” it ran from 1957, initially on Network Three then the Home Service and Radio 4, and finally pulled into the garage in June 1977. For the first dozen or so years it was presented by motoring journalist Bill Hartley and the programme included “topical news and the latest Road Conditions.”

In 1977 the BBC Handbook made reference to a special service advising of fog affecting motorways. It goes on to say:
“… where conditions are such as to constitute a threat to safety, information is broadcast immediately on both Radio 1 and Radio 2, and as soon as possible on Radio 3 and Radio 4. Each of the other networks then directs listeners to a summary of Motorway Fog Alerts broadcast on Radio 2 only, following the News Summary on the hour.”

There was even an ominous sounding Radio 1 Motorway Fog Alert jingle dating from 1976, though nobody can recall it ever being used on air.

Back in the mid-60s the then equivalent of Drivetime was Roundabout and that too had traffic reports. Writing in early 1967 the producer, Brain Willey, said "It's very much a family programme for all age groups and tastes - but we do have the motorist specially in mind. Hence those last-minute flashes on traffic jams and hazards. Again, we remember that drivers hear music more distinctly than speech, so we give a slight boost to voice volume".

Holiday traffic can ruin a bank holiday getaway as anyone knows who’s been stuck on the A303 near Stonehenge or the A64 to Scarborough. Not surprisingly holiday traffic reports seem to have been a regular radio service for many years. In 1958 on the August Bank Holiday the Light Programme included Holiday Traffic with Raymond Baxter (of Tomorrow’s World fame) and John Ellison.

You may have used the TP or TA function on your car radio that automatically detects any local travel bulletins, preceded by three bleeps (above) on commercial radio stations. This uses Radio Data Systems technology that has been around since the early 80s. But in 1971 the BBC’s Research Department was testing a service that they called “Carfax”. This was to be a dedicated traffic information service used to transmit bulletins with no linking material in between. Carfax was to employ a single medium wave channel and have a new network of low-powered transmitters. One of the drawbacks is that it required the installation of a special in-car receiver. Though successfully trialled the project was pulled as a suitable operating frequency couldn’t be negotiated and it would have been too expensive to implement at a time when the Corporation was facing cutbacks.

Its the Radio Data Systems Traffic Message Channel (RDS-TMC) that is used to send up-to-date traffic information to your in-car navigation display or sat Nav. The signal is sent out on Classic FM's frequencies by Traffic Link, which is now part of the American owned INRIX Inc.

For those popping over to the Continent you may recall that Radio 2 broadcast Cross-Channel Travel bulletins just after the 8 am news at the weekend during the summer months in the late 70s. Shortly after the tunnel opened in 1994 a Channel Tunnel Radio service went on-air to provide information to those approaching the tunnel and ports, this closed in September 2000.

More recently another specialised service, Traffic Radio, went online and on digital radio. Run by Global Traffic Network on behalf of the Highways Agency it was on-air between 2007 and 2011, the plug being pulled as part of the Government's cuts.

So there you are, no firm conclusions reached but I hope you enjoyed the journey. Happy Motoring et Bonne Route.

So the first flying eye dates back to 1958? Impressive! I remember the bulletins starting with 'now a message from our Motoring (or, variously, traffic or travel) Unit.' Rather miss that hint of formality, but perhaps I'm outdated...

I've heard quite a few air checks of the Top 20 from Tom Browne's days interrupted by travel flashes - in one instance, two in an hour - which must have played havoc with back timings when you needed to squeeze in twenty songs plus countdown!

Off topic a little, but London Weekend TV in its first couple of years had an R.A.C. road report as first offering on Saturday. But in those days of restricted broadcast hours, this often didn't appear until around midday - of questionable use for anyone planning to escape town on a day trip. I think STV did a weekday lunchtime traffic roundup at 1.25 for a while as well

That's right I recall the "now a message from our motoring unit" too. Occasionally the DJ would name check the person from the unit that had come into the studio but the only name I can find on any recordings is Rex Upchurch.

Hi Andy, great post- where did you find all the clips? Amazing work.

All the clips, bar one, come from my own off-air recordings. The jingles are from a number of sources including some of the CDs that Ken-R used to sell.

This really took me back. I remember the Radio 1 fog alert jingle being used once - it seemed very odd at the time. Listening to it now - absolutely terrifying - I can't imagine anything much worse if they had to announce the UK was under nuclear attack!