Down Your Local - Downtown Radio

This is the eighteenth post in a series looking at the original nineteen ILR stations. This week the Northern Ireland station Downtown Radio.
Downtown Launch


Airdate: 16 March 1976
Still on air?: Yes
Based in Newtownards in County Down the station was unique in that its broadcast area matched that of an ITV company and a BBC region as it covered the whole of Northern Ireland.
Here’s the Radio Guide programme listings published in December 1977: 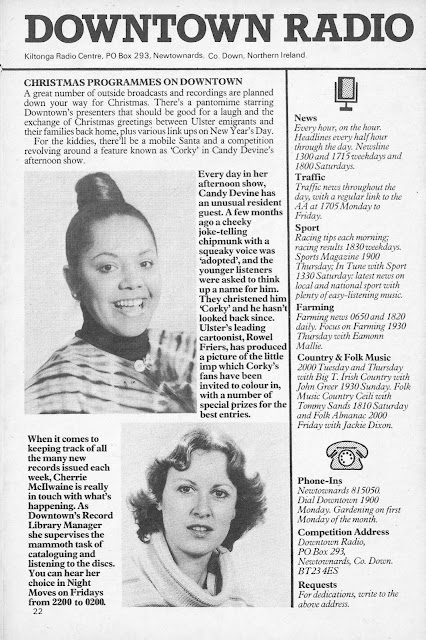 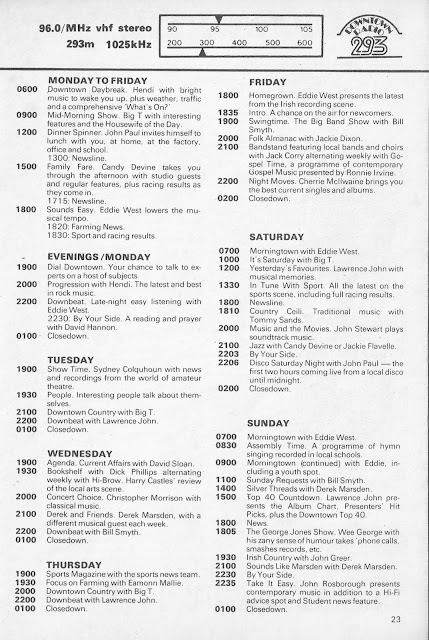 Downtown Daybreak was presented by Michael Henderson (aka Hendi). Like a certain Mr Wogan Hendi had worked in a bank before a career in broadcasting beckoned. After running a mobile disco he presented on the BBC Home Service and Ulster TV before joining Downtown. After nearly a decade at the station it was back to TV at both Ulster and the BBC. His most recent radio gig was at U105 in Belfast.
In all these ILR profiles that I’ve written there are just two DJs that were on air in 1977 and are still broadcasting at the same station-both are at Downtown. First is Trevor Campbell, Big T to his listeners. Giving up a career in the civil service he worked as a club and disco DJ as well as short stints on Manx Radio and Radio Nordsee International. Joining Downtown in 1976 Big T eventually became their “king of country” and had hundreds of registered County Cousins.  Prior to launch country and western music had been identified as a particular favourite of the Northern Irish audience.
The Dinner Spinner was John Paul, full name John Paul Ballantine. He also gave up a steady job as a naval radio operator to become a club DJ in London and the South East before returning to Ulster and joining Downtown. John was later at Cool FM and is now Programme Controller at Citybeat in Belfast.
The other long-standing name at Downtown is Candy Devine. An Australian by birth she started off as an actor and cabaret singer touring the world before settling in Northern Ireland. Candy can still be heard on the station every weekend.
Candy Devine 091011


With Sounds Easy was Eddie West. Later at Radio Nova, Eddie is now Programme Director at Downtown & Cool FM.
A regular broadcaster is those early days was Jackie Flavelle, presenter of the Saturday night jazz show. Well qualified to host the programme Jackie was with the Chris Barber Jazz Band for many years and also performed at London’s Marquee Club and at the Reading Festival alongside Hendrix, Free and the Stones. Later he would become the station’s Programme Coordinator and then Press Officer. His daughter Lisa also followed him into the business working at Cool FM, Citybeat, Downtown and U105.
Another father/daughter connection at the station was Derek and Karen Marsden. Derek presented a couple of shows on Sunday. Following his death in 1998 Lisa worked at Downtown, with a Sunday morning religious programme Reflections, until 2003.
One of the hosts of Downbeat and the Top 40 Countdown was Lawrence John. Many DJs have worked on pirate stations and then gone legit but Lawrence did the reverse. He was at a number of stations both in the province and over the border in the republic  – Downtown, Nova, BCR Belfast, Kiss 106.6, Kiss 103.7 (as John Friday), Riviera 104 Monte Carlo, Radio Nova Dublin and Q102 Dublin (where he was station manager) and at pirate station Energy 106 which he ran between 1997 and 2004 and during which time he infamously claimed to have been abducted by aliens.
Its a little unusual perhaps for the station's Record Library Manager to be on-air but that's precisely what Cherrie McIlwaine (pictured above) did on Friday's Night Moves. Cherrie has continued to broadcast and can be found each weekday evening on BBC Radio Ulster's The Late Show. She's also a keen gardener and presents Ulster's Gardeners' Corner and used to co-host Greenmount Garden on BBC1 Northern Ireland.
Two names worth mentioning that don’t appear in the 1977 schedule but worked here a couple of years later are Paul McKenna, later at Radio 1 and these days helping people to quit smoking etc. and Gary Bones, the producer of Ken Bruce’s Radio 2 show.
This is the station information published in January 1978: 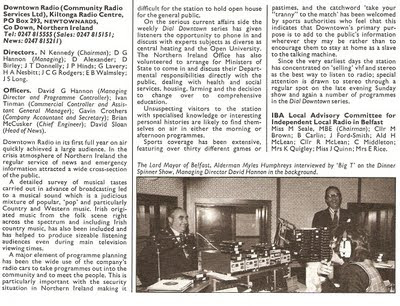 It should be noted that it was only in the 1980s that Downtown became a station for the whole of Northern Ireland.

At this point it mainly covered the area around Belfast - the original intention in the early 80s was for Stroke City (as Gerry Anderson used to call Derry/Londonderry so as to get round the politically contentious nature of it) to have its own station, but this was abandoned in favour of an expansion of Downtown.

Interesting to see Eamonn Mallie reporting on DTR at such an early stage; he's still very much actively covering news and current affairs, and is perhaps NI's most prominent journalist on Twitter - as much in that he has his own parody account.

Also among the 1977 Downtown presenting rota was Bill Smyth, a broadcaster with a distinctive voice later to be heard (and seen) when he took up a continuity announcing role at Ulster Television from 1978 to 1987. Bill went on to work for Citybeat and U105, and sadly died in 2011.

Of course, John Paul's two marriages have been to former Downtown presenters who went on to long (and still ongoing) careers at UTV: Pamela Ballantine and Tina Campbell.