Down Your Local - Beacon Radio

This is the final post in a series looking at the original nineteen ILR stations. This week Beacon Radio.
Airdate: 12 April 1976
Still on air?: Yes, after changes of ownership and branding
Beacon was based at studios in a converted Victorian house in Wolverhampton and was the last of the original nineteen to go live. Essentially covering the Black Country the transmission area did in fact overlap with BRMB’s. Initially its music policy had a heavy slant towards country rock (the Eagles and Linda Ronstadt being favourites on the playlist) and soul music and sounded very slick in comparison to some of the other earlier ILR stations, complete with its EMISON Sunshine Sound jingle package and the use of sound compression. This may have been because the first Station Manager was American Jay Oliver working alongside Scots/Canadian Allan MacKenzie and Canadian consultant Gerry Laing.
Beacon Test Transmission


Despite initially returning a reasonable profit – it was also hot on merchandising to boost income - the station came in for criticism from the IBA for lacking a community identity and was in danger of losing its licence. By 1979 Beacon was given a shake-up by incoming MD Peter Tomlinson (ex. ATV) and Programme Controller Bob Pierson (ex. BFBS). Tomlinson stated that “we have radically changed the style of music to middle-of-the-road music with a heavy emphasis on golden oldies ranging back to 1955. Before we took over no pre-1966 music was played on the station. We didn’t even have the discs in the library.”
Here’s the Radio Guide programme listings published in December 1977: 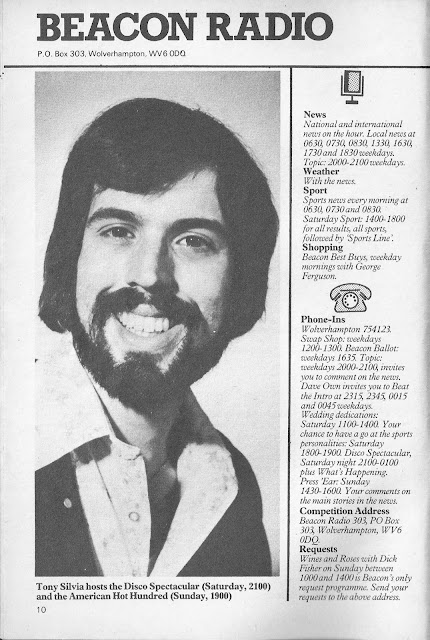 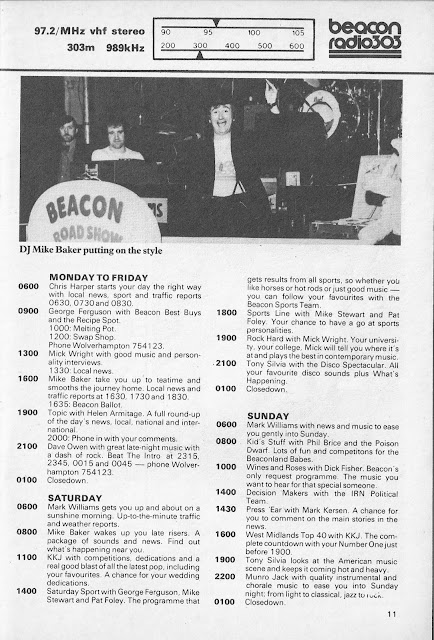 One of the first DJ recruits was Mike Baker, who launched the station. Mike was yet another United Biscuits Network (UBN) bod and was a sound engineer at Capital. He’d also been a pirate at Radio’s Kaleidoscope, Veronica and Caroline – being one of the few to be prosecuted under the Marine Offences Act – and subsequently worked at Chiltern Radio, Lantern FM, Supergold, Heart, Saga, Smooth and Radio Maldwyn. Nowadays you can catch Mike on the morethan40 internet radio service, alongside other ex-ILR stalwarts Mike Hollis and Dave Jamieson.

Another experienced voice at Beacon was George Ferguson who’d started broadcasting on Manx Radio in the 60s. After a spell in the States he came back to the UK and joined BRMB, taking over from Kevin Morrison to present the Breakfast Show. He moved across from BRMB to Beacon, was on Radio 2’s Weekend Early Show in the mid-80s before returning to the Isle of Man to become a manager and presenter at Manx Radio. George left Manx in 2003 to set up 3FM where you can still hear him every weekday morning.
The other Beacon ex-pirate was late-night host Dave Owen who for many years was associated with London station Radio Jackie. Read more about Dave here.
Beacon’s genuine American DJ was Tony Silva (pictured above) with a CV that covered stations WPRO-FM, WSAR and WPJB in New England and a number of other US TV and radio outlets, including CNN. Already an MA when at Beacon he’s now Professor of Communications at the University of Rhode Island.
It’s not uncommon for the on-air talent to also be part of the management team and Phil Brice, presenter of Kid’s Stuff, was the Commercial Production Manager. The “Poison Dwarf” in the billing is copywriter Paul McMahon. Phil went into radio and TV advertising full-time setting up Soundhouse in 1979 and Koala Limited in 1997.
Mick Wright was yet another ex-UBN DJ. He became Head of Music at Beacon and continued to broadcast in the Midlands for the rest of his career at Xtra AM, WABC, Telford FM and Saga.
Working at the weekends was KKJ. Later he would broadcast on BRMB as Kris Kennedy Junior but apparently “KKJ” was also derived from his club DJ days when wearing a King Kong mask he acquired the pseudonym “King Kong Junior”.
The media group behind the Beacon licence was the Midland News Association. Journalist on the MNA-owned paper The Wolverhampton Express and Star, and later deputy chairman of the group, was Mark Kersen, host of the Press Ear current affairs programme. Mark also founded the other Wolverhampton based radio station 107.7 The Wolf.
This is the station information published in January 1978: 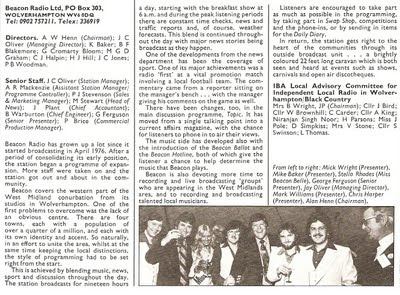 Do you have any audio clips of Beacon Radio from the early days? If so please contact me.
Web Links
Beacon Radio Tribute Site
35th Anniversary celebrations - Soundcloud provided by Andy Walters
University of Worcester PhD Thesis on ILR in the Midlands
Thanks to Andrew Hewkin
Posted by Andy Walmsley at 02:07

Well done - a comprehensive look at the heyday of ILR. I lived about 30 miles outside the Beacon transmission area, however, it could be received very well on FM. As a young teenager in the late 1970s the station was fantastic - the music policy, the imaging and the mid-Atlantic sounding presenters. It had the American Hot 100 chart show every week which was broadcast 6 days ahead of Paul Gamdaccini's on Radio 1. There was a heavy play list of AOR, country rock and disco/dance music with no classical show, so you can see how it appealed to the youth.

The Peter Tomlinson quote, "Before we took over no pre-1966 music was played on the station. We didn’t even have the discs in the library" is not wholly correct. I remember reading it in their 1980 booklet, but a lot of oldies were played on Beacon's playlist and certainly pre-1966, even if they weren't in their library.

I lived outside the transmission area however I received a good signal on FM.
Beacon had a fantastic on air sound and the tracks they played in the 70s were great. Even with the changes forced upon the station it sill sounded good into the 80s and 90s, over it's lifetime Beacon had some great presenters. It was local radio at it's best

Thank you for this resume.

Amid the interest in the pre-Tomlinson era, one forgets that Beacon had, at that moment, two serious IBA stripes against the station for various deviations from broadcasting law. When Peter and I were brought in, we knew that a third stripe would strip the station of its licence to broadcast which would have been an end to Beacon.

I was asked at my board interview how I would address the problem and I said, "by discipline". It is too easy to look back at Beacon's glorious past under its founding managers. In some ways this is true, in others it was a travesty.

I was twelve in 1976 and loved Beacon from the start. To me it had a great local identity and the music and DJs were great. To me those years until 1979 were the glory days as once the station changed I found it boring and switched elsewhere.

Martley - I was 13 when Beacon launched and, although I lived 30 miles East of the transmission area in Leicestershire, I picked up the station after seeing the promotional TV commercials in April 1976. It beamed in well outside the Black Country on both AM and FM. Just as you said, after Jay Oliver and Allen McKenzie were dismissed in June 1979, the station became very parochial and boring when the changes were implemented in September of that year.

Beacon was actually a very good local station with news and sections of programming serving the locality. It was judged though on its appeal to the a mass audience because of its musical, presentation and jingles content and the IBA used its teeth and authority to force it to become 100% locally relevant rather than appeal to people outside the area like me who listened for other reasons; namely its professionalism and ability to compete with Radio 1.

Beacon was practically a pirate station due to the fact that it broke several IBA rules during its first three years.